Russia says no progress on Ukraine truce at talks

Russian Foreign Minister Sergei Lavrov has said Berlin talks on a truce in Ukraine failed to make any progress. But he said all issues relating to a Russian aid convoy for Ukraine had been resolved. 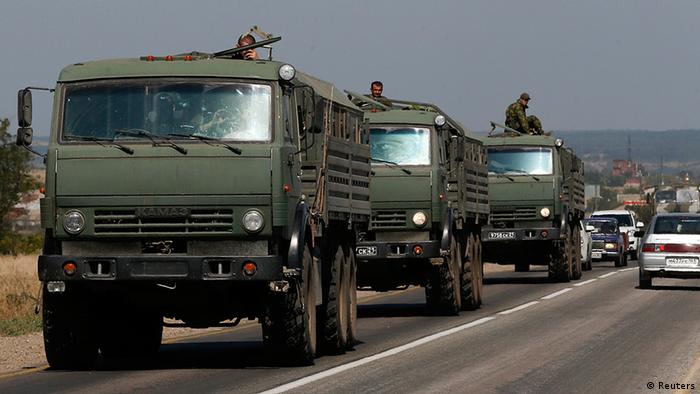 Russian Foreign Minister Sergei Lavrov said on Monday that no progress had been made toward resolving the conflict in Ukraine at crisis talks over the weekend in Berlin.

Following the talks between the foreign ministers of Russia, Ukraine, Germany and France on Sunday, Lavrov told a Berlin news conference that the talks had failed to produce "positive results in [...] establishing a ceasefire and (starting) a political process."

Lavrov accused Kyiv's new leaders of changing their demands over what it would take to establish a truce between government troops and pro-Russian insurgents, who have been fighting for more than four months in eastern Ukraine.

"Our Ukrainian counterparts, unfortunately, continue setting conditions - and rather vague ones at that - including, as they say, the establishment of an impenetrable border," Lavrov said, adding that Russia wanted an "unconditional" ceasefire.

However, Lavrov said that "all questions" regarding a Russian humanitarian convoy to Ukraine had been resolved with Kyiv and the Red Cross.

The convoy has been parked at the border between Russia and Ukraine for days amid objections from Kyiv, which says the some 300 trucks may be carrying weapons or other aid for the pro-Kremlin rebels.

Moscow has rejected the fears as absurd.

German Foreign Minister Frank-Walter Steinmeier said on Sunday that the Berlin talks had seen "frank words" being exchanged "on some issues," but admitted the talks had been "difficult."

Steinmeier said the four foreign ministers would consult with their leaders before possibly agreeing on how to proceed on Tuesday.

The conflict in Ukraine's Russian-speaking east is in a critical phase, with Kyiv and Western governments fearing a possible Russian military intervention in support of the pro-Moscow insurgents, in view of a build-up of troops on Ukraine's border.

Both Ukraine and the West have also repeatedly accused Moscow of supplying the rebels with weapons.

Lavrov again denied Moscow was helping the rebels, and also defended the amassing of Russian troops at the border, saying it was necessary to be alert when "a real war" was being waged nearby.

Meanwhile, the Ukrainian military says it has encircled the rebel-held town of Horlivka and taken control of smaller settlements in the region.

The government has reported several recent advances against the rebels, saying it has also cut off their communication lines.

The conflict in eastern Ukraine erupted after Russia annexed Ukraine's Crimean peninsula following the ousting of a Moscow-backed president in Kyiv. Separatists have declared "people's republics" across the east and say they want to join Russia.

More than 2,000 people have died in the four months of fighting, and civilians are suffering increasingly as the humanitarian situation deteriorates.