Thousands of members of Germany's anti-migrant PEGIDA organization gathered in Dresden to mark the group's second anniversary. Police separated PEGIDA and counter protesters in an effort to prevent clashes. 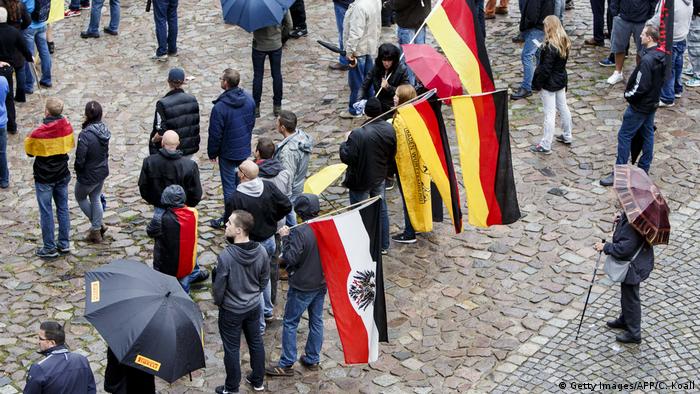 Supporters and opponents of the "anti-Islamization" and anti-migrant PEGIDA movement assembled in Dresden on Sunday to mark the group's second anniversary.

Over 5,000 were gathered at Dresden's Theaterplatz for the PEGIDA rally, according to a reporter with the German public broadcaster "MDR."

Speeches held at the rallies and signs held by supporters reflected the group's worries about the spread of Muslim culture and suspicions that the mainstream media does not accurately represent PEGIDA's arguments.

People in the crowd called for German Chancellor Angela Merkel to step down, labeling her a "Volksverräter" or "betrayer of the people" - a term which is associated with National Socialism.

One PEGIDA speaker reportedly said: "We look forward to the electoral victory of LePen and Trump."

Around 130 counter protesters were also present as well, according to the observer group "Durchgezählt," although the groups were separated by the police.

The minister, who also lives in Dresden, urged that the east German city is a tolerant and diverse place. "Two years of PEGIDA can't change that," De Maziere said.

Police presence in Dresden is expected to be massive in part to prevent a repeat of the violence that broke out last year between PEGIDA supporters and counter demonstrators.

Dresden police chief Horst Kretzschmer appealed on both sides to respect one another's right to express themselves freely and peacefully, but also to do so "with decency and respect."

Prior to the rallies, some counter protest groups said the city limited their anti-PEGIDA demonstration due to a possible Islamic terror threat, cordoning them off away from the anti-migrant group's rally.

However, police in Saxony - the eastern German state where Dresden in located - denied this information on Twitter, saying: "Contrary to current media reports, we have no indications of a concrete attack threat" during the demonstrations.

PEGIDA opponents decried the city's efforts to separate the two groups, saying the authorities were making great effort to ensure PEGIDA members were not met with dissent.

"For PEGIDA's birthday, the Dresden authorities are rolling out the red carpet once again and making sure counterdemonstrations are nowhere to be seen or heard," said Andre Schollbach, a Left party member in the local state legislature.

PEGIDA's anniversary march was set to take place on Monday, but was blocked when the city organized and scheduled a festival instead named "Dresden, show yourself!", in a clear slight to the far-right movement.

The movement first began in October 2014 and gained significant momentum due to an influx of refugees from Syria and other Muslim countries. The group is also plagued by internal divisions which resulted in conflicting demonstrations in late September.

Taking a stand against xenophobia and intolerance

Earlier this week, the Saxon capital of Dresden was rocked by two apparently xenophobic bomb attacks. Linda Vierecke reports on how people are coping after the explosions. (29.09.2016)