Pro-government forces have launched an offensive in the northern city of Aleppo, seeking to recapture areas they lost last month. Pro-Assad troops aim to reimpose a siege on rebel-held zones of the city. 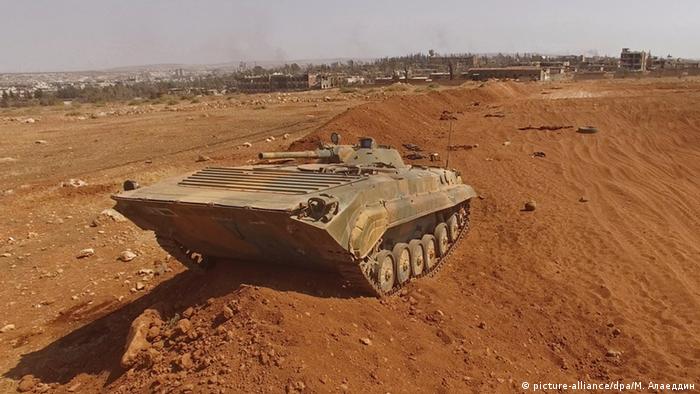 The areas recaptured included a weaponry college and air force technical college in the Ramousah area. By recapturing the corridor containing the colleges, government forces would be able to reimpose a siege on Aleppo's opposition-held eastern sector.

Rebel alliance launches 'battle for all of Aleppo'

A rebel alliance has launched a wave of attacks aimed at recapturing the northern city of Aleppo. But Damascus has dismissed reports that rebels broke its siege of the city, saying the army has discovered a "new route." (08.08.2016)

Syrian government troops have clashed with opposition forces in Aleppo, a day after rebels breached a regime blockade in the embattled northern city. The government has responded with a major airstrike campaign. (07.08.2016)

Fighting has reportedly continued in Aleppo despite ceasefires declared by Russia for humanitarian aid workers. There have also been further reports of chlorine and barrel bomb attacks in the besieged Syrian city. (11.08.2016)

President Bashar al-Assad's troops are closing in on the rebel forces holed up in Syria's largest city. Their situation seems hopeless. A military victory alone will do little to pacify the country. (04.08.2016)

The state news agency SANA reported that government troops were "continuing their advance in the area to impose almost a total siege on the gunmen in Aleppo."

The Syrian Observatory for Human Rights confirmed that government troops had captured the academy, but also announced that insurgents had launched a counteroffensive.

Rami Abdel Rahman, director of the Britain-based monitor, said that, if government forces were to recapture the whole area, they could then "easily take Ramussa, a suburb south of Aleppo, and reimpose a siege of the rebel districts."

Rebels had won back the corridor containing the military schools last month and vowed a battle to retake the city.

Backed by Russia, Iran and the powerful Lebanese Hezbollah group, President Bashar al-Assad aims to recapture the whole of Aleppo, which was the most populous city in Syria before the civil war began over five years ago. Russia's intervention, particularly its air support, has largely turned the tide of the war in Assad's favor.

North of Aleppo, fighting between Turkish-backed rebels and the "Islamic State" (IS) group intensified on Sunday.

Story of a rescue worker in Aleppo

The story of a rescue worker in Aleppo

Turkey had sent tanks into the town of al-Rai on Saturday, in what it said was a "new phase" in the operation to drive IS away from the border. Al-Rai lies 55 kilometers (35 miles) west of the border town of Jarabulus, which was seized last week by Turkey-backed rebels.

Forces backed by Turkey were said to be advancing toward each other from both towns in an effort to clear the final stretch of border held by IS.

On Sunday, the United States and Russia were unable to secure a ceasefire deal between Assad's government and moderate rebels that would allow for the delivery of humanitarian supplies to Aleppo. Diplomatic sources at the G20 summit in China said there had been "grave differences" between the sides.