Marking what would have been Princess Diana's 60th birthday, her sons William and Harry unveiled a statue as a tribute to her. Here's a look back at her legacy.

More than two decades after her death, Prince William and Prince Harry still grieve over the loss of their mother, Princess Diana. How could they not?

Perhaps that's why the two princes managed to put aside their differences in order to pay tribute to the lasting legacy of "Lady Di" — as their mother is and was affectionately known among the global public.

On July 1, a statue honoring the late princess was unveiled in the Sunken Garden of Kensington Palace, William and Harry's mother's former home.

"Today, on what would have been our Mother's 60th birthday, we remember her love, strength and character — qualities that made her a force for good around the world, changing countless lives for the better," the brothers said in a statement. 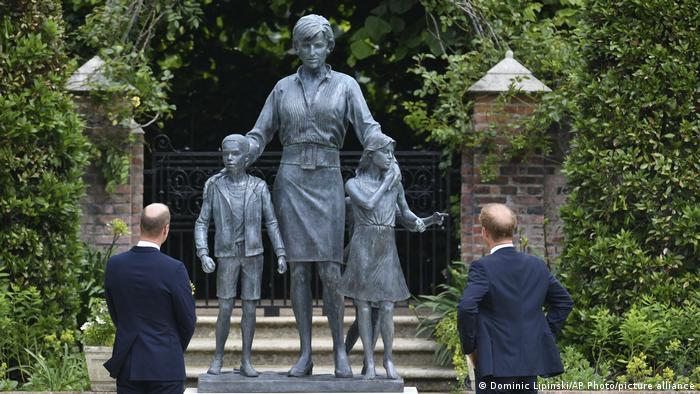 The statue tribute to Diana, unveiled on July 1

"Every day, we wish she were still with us, and our hope is that this statue will be seen forever as a symbol of her life and her legacy."

The brothers, whose falling-out has been the subject of intense media scrutiny, showed a united front as they revealed the statue.

William and Harry were joined by their mother's brother Charles Spencer, 9th Earl Spencer, as well as her sisters, Lady Sarah McCorquodale and Jane Fellowes, Baroness Fellowes, in a small, private ceremony at the Sunken Garden — one of Diana's favorite places.

It was the first time the brothers have appeared in public together since the funeral of their grandfather, Prince Philip, the Duke of Edinburgh, in April.

William and Harry themselves had the statue commissioned back in 2017, saying then in a joint statement that it had been "20 years since our mother's death and the time is right to recognize her positive impact in the UK and around the world with a permanent statue.

"Our mother touched so many lives."

Princess Diana was indeed recognized for her sense of compassion, endearing her to the hearts of millions around the world.

Born Diana Frances Spencer on July 1, 1961, she was a kindergarten teacher before marrying Charles, Prince of Wales, in 1981. During her royal duties as Princess of Wales, Diana adopted an increasingly unconventional approach to charity work. 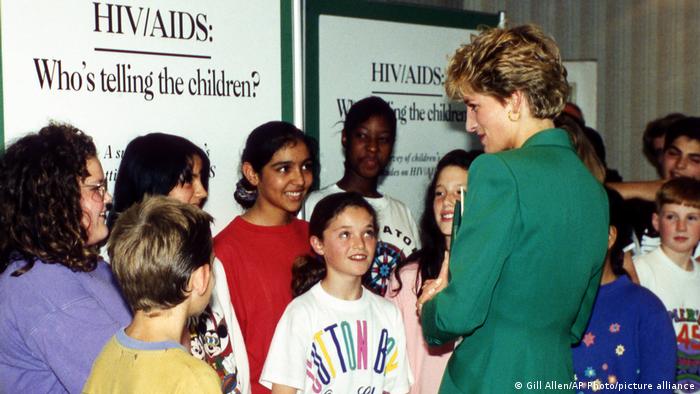 Her patronages included children and youth, and later, survivors of landmine explosions, cancer patients and those suffering from mental illness, as well as HIV/AIDS patients — with a 1987 photo of her shaking hands with a patient making world headlines; at the time many people erroneously believed that the virus could be transmitted by mere physical touch.

After many years of an unhappy, embroiled marriage, Charles and Diana divorced in 1996. Diana, who had — after her initial years of appearing shy — long become a glamorous fashion icon in the media spotlight, died aged 36 from injuries suffered in a car crash in Paris on August 31,1997.

She and her boyfriend, Egyptian entrepreneur Dodi Al-Fayed, were attempting to flee the paparazzi, who were chasing after pictures of the two of them together. Later reports said that the chauffeur of the limousine, Henri Paul, who also died in the crash, had well over the legal limit of alcohol in his blood.

Diana's sons William and Harry were aged 15 and 12 at the time, respectively. 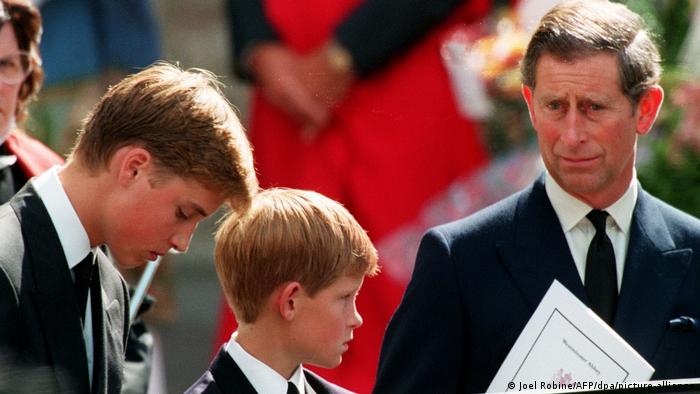 Princes William and Harry, Diana's children, and their father Prince Charles, at her funeral

While people were in shock around the world over the news, remarkably, it took days for Queen Elizabeth II. to publicly express her sympathy. Her silence was met with huge criticism at the time, particularly from the UK's population, with every fourth Brit then advocating the abolition of the monarchy. Only several days later did the royals reach out to the grieving people.

Likely, the queen was still at odds with the explosive and contentious BBC interview Diana had given in 1995, in which she openly discussed her 1992 separation from Charles and the Royal Family, and the years of desperation beforehand.

Hundreds of millions of people in more than 100 countries watched the riveting interview in which Diana revealed details about her bulimia, depression, self-mutilation, the breakdown of her marriage to Prince Charles and the extra-marital affairs involved. She also discussed the British monarchy itself and its trajectory.

However, a report has since condemned former BBC journalist Martin Bashir's means of securing the interview and the way he conducted it.

The ups and downs of the Royal Family to this day remain a riveting subject in the UK and around the globe.

The hugely popular Netflix series The Crown follows the royals over decades, tracing Queen Elizabeth II's ascension to the crown, as well as the many sub-plots of family drama, including Diana's turmoil, which is detailed in Season 4. Diana is portrayed by British actress Emma Corrin, who uncannily depicts the princess and her mannerisms. While the series is a loose interpretation of actual events, it has rekindled public interest in the Royal Family.

For those who want to know more about the late princess, the documentary Diana: In Her Own Words features audio recordings of the princess herself in interviews with biographer Andrew Morton. The documentary The Story of Diana showcases her life, as does the upcoming Hollywood movie Spencer, with Kristin Stewart in the leading role. In 2013, British actress Naomi Watts also portrayed Diana in the movie of the same title.

All of these works reflect how Diana has remained a cultural icon through the ages. 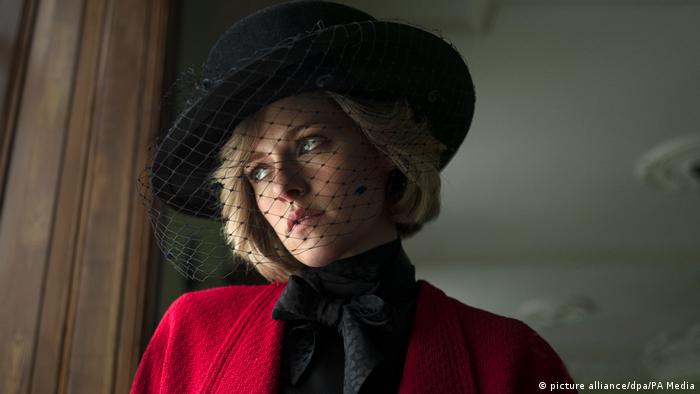 Kristin Stewart bearing a striking resemblance to Diana, in the upcoming movie "Spencer"

Artist Ian Rank-Broadley created the Diana statue in collaboration with input Princes William and Henry, who signed off on its designs. Rank-Broadley is famous for his depiction of Queen Elizabeth II that appears on coins in the United Kingdom.

The fact that the princes had managed to agree on the statue's design was rather fortunate as their relationship has been strained since Harry, along with his wife Meghan Markle, stepped down from senior royal duties in early 2020.

That relationship was again burdened after a tell-all interview  between Harry, Meghan and US TV star Oprah Winfrey in March 2021 that made global headlines. One of the most explosive allegations shared in the broadcast was that racism in the royal family was one of the reasons that had led the couple to leave, creating a further rift among the young royals.

A look to the future 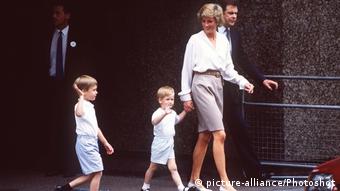 Diana with William and Harry back in 1988

Dramatic headlines aside, however, one realizes that grief may either unite or divide. "Every one of us needs to show how much we care for each other and, in the process, care for ourselves," Diana once said.

Despite their differences, William and Harry were noble enough to walk side-by-side during the funeral procession of their grandfather, Prince Philip, in April 2021. And the names of the children of both Prince William and Prince Harry pay tribute to their mother: William and Kate's daughter Charlotte, bears the middle name Diana, as does Harry and Meghan's recently born daughter, Lilibet (Lili) Diana.

As US best-selling author Joan Didion wrote in The Year of Magical Thinking, in which she documents the loss of her husband, "Life changes fast. Life changes in an instant. You sit down to dinner and life as you know it ends."

The instant of that car crash involving Diana in Paris changed the lives of many around the world as they mourned the princess' death. It certainly turned the lives of William and Harry upside-down.

The new statue is a way of keeping a part of Lady Di, the Princess of Wales — and a princess of hearts — alive, and will likely become a magnet for people around the world when they visit Kensington Palace.

This is an updated version of an article originally published on June 30.

Glittering gowns, elegant suits and bold mini dresses worn by the late Princess Diana are on show at Kensington Palace, marking the 20th anniversary of her death. The exhibition charts her evolving style.

In the docu-series, Prince Harry tells Oprah how the royal family "bullied" him. Amid the COVID-19 pandemic, mental health is a crucial issue for countless people.

Prince Harry on Oprah about Diana and AIDS

Prince Harry on Oprah about Diana and AIDS

Harry & Meghan pull back the curtain on royal life