The day was inevitable. But with COVID placing restrictions on the Duke of Edinburgh's funeral, the memorial service seemed more surreal than many other royal events. Sertan Sanderson reports from London. 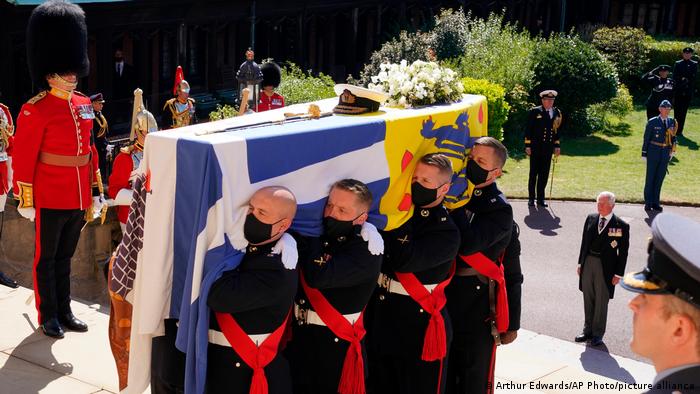 The funeral procession to St. George's Chapel across the grounds of Windsor Castle looked at first more like a military parade, with soldiers of various ranks and battalions taking part in the event. Prince Philip, the Duke of Edinburgh, had requested a full military procession for his memorial service, having served as a naval officer during World War II and beyond.

With COVID-19 restrictions spelling severe limitations on the event, many aspects of the Duke of Edinburgh's funeral had to be adapted from the standard royal funeral playbook. In this regard, it was a rather simple but highly dignified affair, at least by royal standards. 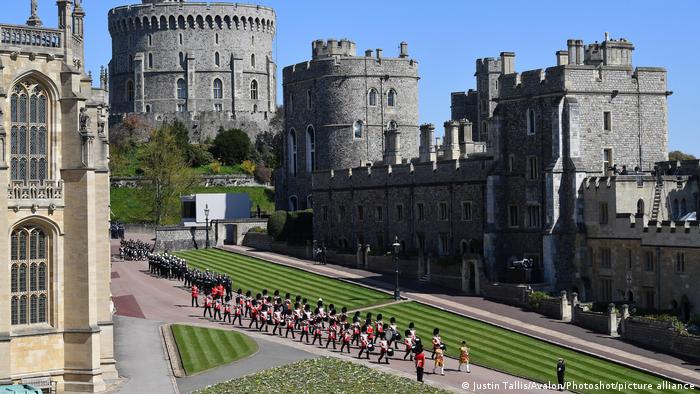 The sight of masks, all in a uniform black to signify the mourning for the loss of the Queen's consort, were commonplace at the memorial with few exceptions. There was also a clear sense of social distancing throughout among all those present at Windsor, which made the service look even more choreographed than previous royal funerals.

Relatively few people came to witness the proceedings from outside the castle grounds, as people in Windsor and beyond adhered to COVID-related government limitations on gatherings and travel, which were also echoed by the royal family. 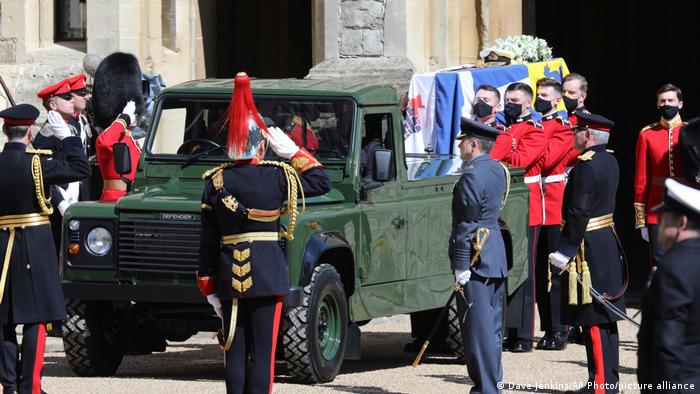 The royal pickup truck: Philip was involved in the design of this repurposed Land Rover

As the coffin was moved from the royals' private chapel at Windsor Castle to St. George's Chapel in a converted Land Rover, which rather resembled a pickup truck than a hearse — a design by Philip himself, apparently — senior members of the royal family started to walk behind, led by Charles, Prince of Wales and his sister Anne, the Princess Royal.

Only 30 people allowed at service

Following immediately behind Charles and Anne, the public was treated to a rare public sighting of Prince Andrew, Duke of York, who since getting embroiled in the Jeffrey Epstein scandal had largely withdrawn from public engagements. He walked alongside Prince Edward, the Earl of Wessex, who is the youngest of the queen's and Philip's children. 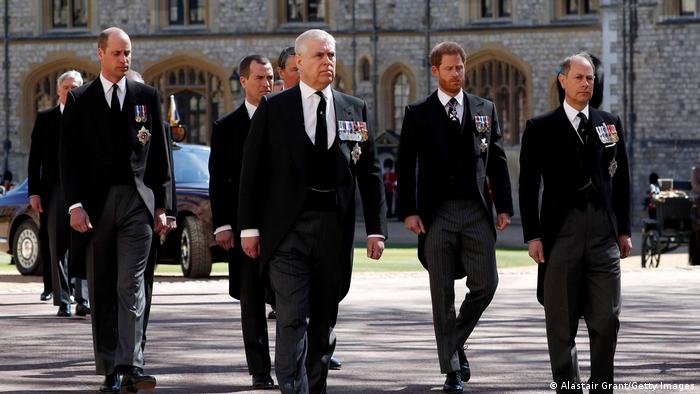 Philip's grandsons, Princes William and Harry, were seen walking side by side behind the more senior royals with no sign of conflict between the two, as opposed to what parts of the press have been reporting.

Seeing the two princess walk in a funeral procession was somewhat reminiscent of the scene from 1997, when the then-teenage princes joined the funeral procession of their mother Diana, Princess of Wales, on the way to Westminster Abbey.

A faithful soldier — and the queen's rock

St. George's Chapel itself looked positively half-empty, as a very limited number of people were allowed to attend the funeral with COVID-19 restrictions in place. Even the cantors were limited in numbers, with only four singers performing in a socially distanced manner in the nave of the chapel after all attendees had arrived. 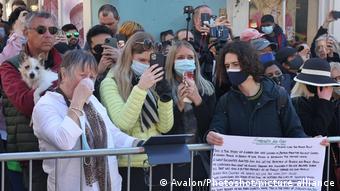 Outside the castle walls, only few people came to mourn the Duke of Edinburgh

The music was deliberately chosen by the duke, with the hymn "Eternal Father, Strong to Save" opening the service.

The hymn, which is associated with the naval armed services, reinforced the notion that Philip wanted to be remembered in his own right as a military man — even if the queen regarded her faithful consort as her "strength and stay" and her "rock."

But the choice of opening hymn also reflected something about the long arch of history that spanned Philip's life, who died on April 9 at the age of 99: the hymn had also been sung at the funeral of Philip's uncle, Louis Mountbatten, 1st Earl Mountbatten of Burma, who was murdered by the IRA in 1979 — an event that shook the entire royal family, but Charles and Philip in particular.


Shielding the monarch from harm

First to enter the chapel was Queen Elizabeth II, who was accompanied by a number of female members of the royal family, including Camilla, Duchess of Cornwall and Catherine, Duchess of Cambridge. The queen, however, had been told to take social distancing particularly seriously, as the monarch has to be protected from harm even during her husband's funeral. 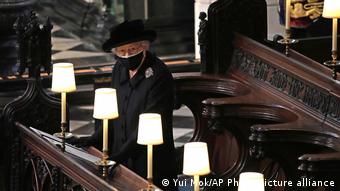 Once inside the chapel, the queen had to keep her distance to protect herself from COVID

Seeing the matriarch of the royal family, who is just days shy of turning 95, sit alone and somewhat sequestered away from the rest of the mourners was a heartbreaking sight in itself during the occasion of Philip's funeral. Having lost her husband of more than seven decades, the monarch appeared weakened, with the black mask over her face probably shielding her from more than just the virus but also from curious glances by the public that followed the event via global live broadcasts.

As the rest of the royals joined her, in particular the Duke of Edinburgh's children, the service started with a minute of national silence. That silence, however, was not transported far beyond the castle grounds in Windsor, as people across the UK, especially in England, were enjoying their first Saturday with bars and restaurants reopened for outdoors service. The funeral service may not have been everyone's high priority, as Philip had a rather divisive reputation. 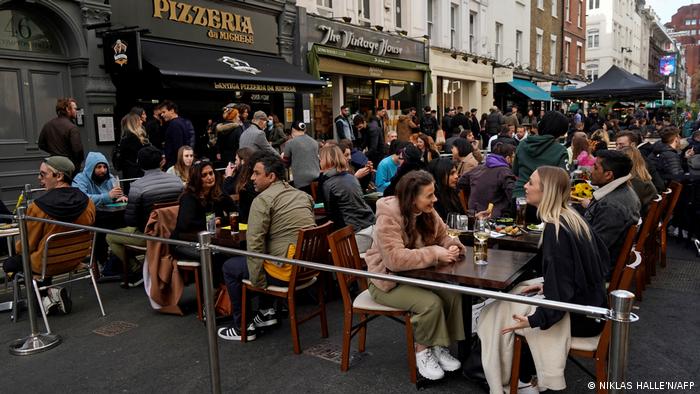 With restaurants and bars reopened for outdoors service, many British people likely missed the funeral

Philip's coffin stood in the chapel throughout the memorial service — with a sense of gravitas that he perhaps might not have enjoyed if the funeral had gone ahead at Westminster Abbey with 800 guests under pre-COVID guidelines. Instead of a packed abbey, there was a desolate-looking chapel with only 30 people in attendance, as is laid out in UK government guidelines on funerals during COVID. 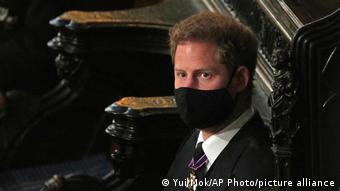 Prince Harry attended the funeral without his wife, Meghan Markle, Duchess of Sussex

However, among the rather few attendees there were also several German royals present at the funeral, as Prince Philip was related to various German monarchies, which are all now defunct. Among those attending the service from Germany were Donatus, Landgrave of Hesse, Bernhard, Hereditary Prince of Baden, and Philipp, Prince of Hohenlohe-Langenburg.

David Conner, the Dean of St. George's Chapel, and Justin Welby, the Archbishop of Canterbury — the highest-ranking figure in the Church of England and the global Anglican Communion after the queen herself — masterfully filled the void in the chapel together, with a choice of apt readings from the scripture that reflected the duke's values.

There was no eulogy spoken, as per Philip's wishes, making the service a rather quick affair. In life as in death, Queen Elizabeth's consort remained a humble man, whose actions often reflected little of the ceremonial grandeur that is otherwise associated with the Royals.

The duke's coffin being lowered into the royal vault under St. George's Chapel came almost as the lowlight of the memorial service; after such a carefully staged event, the mechanical disappearance of the coffin spelled out a rather anticlimactic ending to the funeral service.

A final lament was played on the bagpipe by a Pipe Major from the Royal Regiment of Scotland, who slowly vanished out of sight on the television broadcast — as did the coffin bearing Philip's remains.

That coffin will, however, reappear again one day — though probably without the kind of elegant yet understated fanfare that was involved in today's funeral service.

The royal crypt under St. George's Chapel is technically not the duke's final resting place: When Her Majesty Queen Elizabeth passes away one day, Philip's coffin will be moved to join hers at King George VI's memorial chapel, also located on the grounds of Windsor Castle, which is where Elizabeth II wishes to be interred. That chapel also houses the remains of Queen Elizabeth, the queen mother, King George VI, the queen's father, as well as those of her sister, the late Princess Margaret, Countess of Snowdon.

After 73 years of marriage, the royal couple will then be united again once more. But even though the general interest in Prince Philip's death and funeral may have been somewhat low, many Brits hope that it will still take many years until the day comes that they will have to say goodbye to their monarch.

Only 30 people, including his widow Queen Elizabeth, were allowed to attend, due to concerns over the coronavirus pandemic. The ceremony saluted both his service to the Royal Navy and support for the UK monarch.

The scandal surrounding United Kingdom Prime Minister Boris Johnson and parties at his Downing Street residence during coronavirus lockdowns appears to have deepened.