An independent inquiry has concluded that BBC reporter Martin Bashir "deceived" Diana when securing what became a explosive 1995 interview, where the princess famously said: "There were three of us in this marriage." 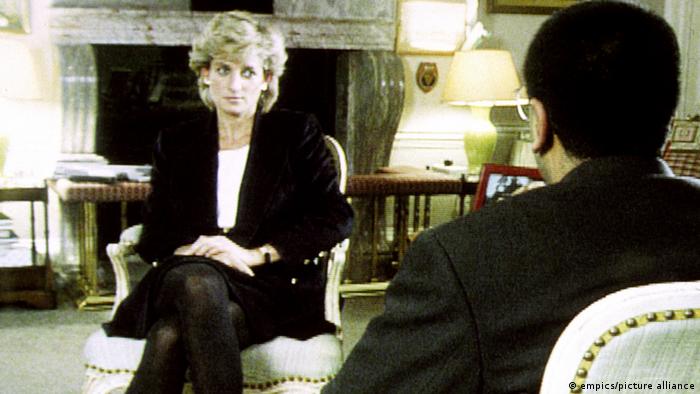 "There were three of us in this marriage," Princess Diana famously said in the 1995 interview with BBC journalist Martin Bashir

The interview —  the first time Princess Diana made public and candid comments about her failed marriage —  was watched by millions of people worldwide and shook the British monarchy.

"Mr Bashir acted inappropriately and in serious breach of the 1993 edition of the (BBC's) Producers’ Guidelines on straight dealing," the report said.

It also concluded that the British broadcaster had fallen short of "the high standards of integrity and transparency which are its hallmark" in its response to allegations of impropriety.

In the interview, which featured on the BBC's flagship "Panorama" program, Princess Diana famously said "there were three of us in this marriage" — referring to Prince Charles and his extra-marital relationship with long-time mistress and now wife, Camilla Parker-Bowles.

What are the allegations against Bashir?

The BBC said in November that it had set up the investigation, headed by retired senior judge John Dyson, after Princess Diana's brother Charles Spencer made renewed complaints that Bashir used forged documents and "other deceit" to persuade her to agree to the interview.

Spencer alleged Bashir showed him fake bank statements relating to Princess Diana's former private secretary Patrick Jephson and another former royal household member to induce him to give access to his sister.

Bashir was said to have ordered a BBC graphic designer to mock up fake bank documents that gave the impression people close to Princess Diana's family were being paid to provide information about her and sell stories to newspapers.

Spencer also said Bashir had persuaded him by saying Princess Diana was being bugged by the security services.

What happened to Bashir?

Last week, the BBC said Bashir was leaving his current job as the broadcaster's religious affairs editor due to ill health. He has been unwell with COVID-19-related complications.

The announcement came just hours before Dyson's report was submitted to BBC management.

Bashir, now 58, apologized but said he did not believe the faked statements had led Diana to give the interview, PA Media reported.

An earlier BBC inquiry had cleared the journalist of wrong-doing, but Dyson called the internal probe "flawed and woefully ineffective."

Bashir, who was not as well known at the time of the interview, went on to have a high-profile career on US television networks, interviewing celebrities such as Michael Jackson.

How did the BBC and the Royals react?

Princess Diana's brother said he was never consulted regarding the initial probe into the circumstances surrounding the interview.

"The BBC has shown itself incapable of honestly facing up to the ugly truth of this matter," Spencer said.

Princess Diana's sons, Prince William and Prince Harry, have both welcomed the investigation.

The princes slammed the BBC and Bashir over the interview, with William saying that the way the sit-down was obtained had "substantially influenced" what his mother said on the air, and made a "major contribution" to the demise of his parents' relationship.

William added that the BBC's oversight failures had "contributed significantly to her fear, paranoia and isolation" in her final years.

"It is my firm view that this Panorama program holds no legitimacy and should never be aired again," he said, in a statement read in-person from Kensington Palace. "It effectively established a false narrative which, for over a quarter of a century, has been commercialized by the BBC and others," he said, adding that the narrative "needs to be addressed."

In his own release, William's younger brother Harry said the enquiry report was "the first step towards justice and truth," but that the deceptive practices exposed were still widespread today and had played a part in his mother's death.

"The ripple effect of a culture of exploitation and unethical practices ultimately took her life," he added.

Last year, Prince William said the investigation "should help establish the truth behind the actions" that led to the program.

In a statement, BBC Director-General Tim Davie said the BBC "cannot turn back the clock after a quarter of a century."

"We can make a full and unconditional apology. The BBC offers that today," he added.

Princess Diana divorced from Prince Charles in 1996 and died in a Paris car crash in 1997 as she was pursued by paparazzi.

In response to the revelations, the British government on Friday warned of potential action against the BBC, piling mounting pressure on the outlet. Culture Secretary Oliver Dowden said the inquiry highlighted "damning failings at the heart of the BBC," which is publicly funded.

Ministers would now "consider whether further governance reforms at the BBC are needed," as talks approach for renewal of its royal charter covering its running and regulation, he added.

Meanwhile, British Prime Minister Boris Johnson said he was "concerned" by the report. "I am obviously concerned by the findings of Lord Dyson's report," Johnson told broadcasters on Friday.

"I can only imagine the feelings of the, the royal family and I hope very much that the BBC will be taking every possible step to make sure that nothing like this ever happens again," he added.