Angela Merkel has visited Ukraine's President Poroshenko, who is in the midst of an election campaign. There's disappointment in Kyiv at his failure to implement reforms, and hopes of EU-style democracy are fading. 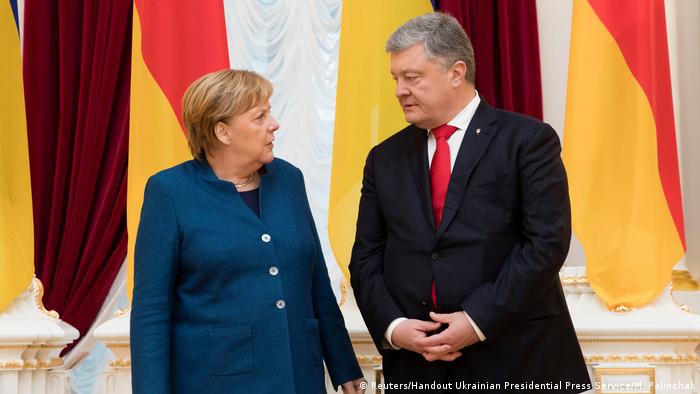 The German chancellor's visit to Kyiv can safely be filed under the heading of "reliable diplomacy." Since early 2016, when Angela Merkel committed Germany to long-term engagement with Ukraine by supporting the second Minsk peace agreement, there's been plenty of contact between the countries' leaders, in person and on the phone. Berlin and the majority of its EU partners have condemned both Russia's annexation of Crimea — illegal under international law — and its military campaign in eastern Ukraine. The United States has even gone so far as to supply arms to the Ukrainian army.

Kyiv's most important supporter in the European Union has announced she will not seek re-election in 2021. Merkel has demonstrated her commitment, but Ukraine's President Petro Poroshenko has been less conscientious about keeping his promises. 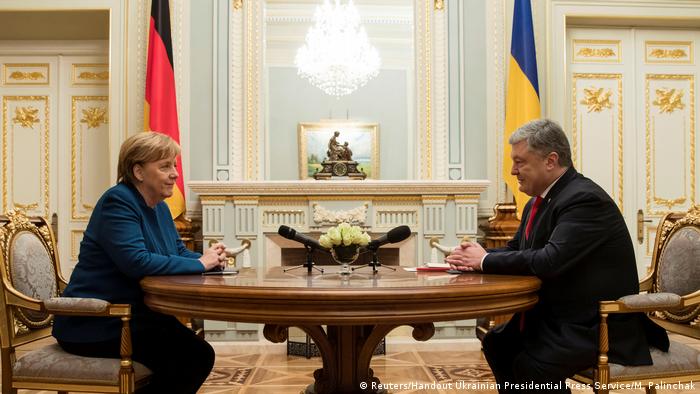 Merkel is visiting Poroshenko in the midst of an election campaign and as disappointment rises in Kyiv at his failure to implement reforms.

Assuming Angela Merkel really does hang on until the end of her term in office, she may be in a position to welcome Poroshenko's successor. Elections will be held in Ukraine in March and April 2019, and most opinion polls are placing Poroshenko fourth or fifth. This is predominantly his own fault.

As a successful chocolate manufacturer from the town of Vinnytsia, when Poroshenko was elected president after the pro-European Maidan protests in the winter of 2013/2014, he initially said he would sell his business empire. Becoming president was a remarkable career move. After all, as an economic expert, Poroshenko had been part of the inner circle of the previous, pro-Russian president, Viktor Yanukovych, who was chased out of office in February 2014.

Oligarchs have increased their wealth

The president's companies are reportedly now worth even more than they were when he took office. Since the publication of the Panama Papers, Ukrainians know rather more about their president's morals. Poroshenko made use of a Cyprus connection and a trustee arrangement to ensure that, if his companies were sold, they could, in theory, be located abroad, making them tax-exempt. His advisers insist that all this was perfectly legal.

Poroshenko is in the same position as other oligarchs in his country. While many Ukrainians have been hit hard by the continuing fall in the value of the domestic currency, the hryvnia, oligarchs have remained unaffected. Most have stabilized their fortunes, or even managed to increase them, since the economic collapse that followed the Maidan revolution. So far, the system of the oligarchy is the only victor of the post-Maidan process.

However, the first post-revolutionary resident of Kyiv's presidential palace has clearly developed a taste for the trappings of political power. Petro Poroshenko is playing the last card of the unpopular politician: He's running a patriotic election campaign, appealing to Ukrainians' national pride. The war cry of the Maidan revolution — "Glory to Ukraine! Glory to the heroes!" — has been made the official greeting for soldiers and police. Back then, it was a battle cry against the post-Soviet servitude of Muscovite imperialists under Putin, but it acquires an unsavory nationalistic flavor when shifted away from civil society to the state authorities. It also sounds very strange to secular European ears when Poroshenko positions himself at the head of a movement calling for the independence of the Ukrainian Orthodox Church.

In a historic decision, the Kyiv Patriarchate was recently recognized by the Patriarch of Constantinople as an independent Orthodox Church. The Russian Orthodox clergy in Moscow are furious. But why the secular President Poroshenko, of all people, should take the credit is a mystery. All this is clearly intended to distract from the fact that the post-Maidan politician still has not kept his most important promise: to turn Ukraine into a European-style democracy.

However, three years after the Euromaidan there have been some successes, too. At the end of November, the third German-Ukrainian Economic Forum will take place in Berlin. German industry helped to found a German-Ukrainian chamber of commerce, where the two countries have equal status. Economic development has detached itself from the political problems, showing that new structures are emerging despite the powerful oligarchy.

In the capital Kyiv, for example, more and more foreign investors from Western countries are looking around for apartments in old buildings. They're assuming that, over the coming decade, the Ukrainian property market will develop similarly to those of the central European countries that joined the EU in 2004. Whether this bet will actually pay off depends largely on political developments.

Right now, many Ukrainians have lost hope that things will improve in the long term. They have grown impatient. Rapprochement with Europe is not happening fast enough for them, so many are packing their bags and heading for Europe themselves. Ukrainians now top EU immigration statistics and are being swallowed up by the hungry job market in neighboring Poland. They're unlikely to be tempted back by more of Petro Poroshenko's empty promises.

Moscow has slapped economic sanctions on hundreds of Ukrainian nationals, including ministers, senior lawmakers and President Petro Poroshenko's son. Russia said the measures could be revoked if Kyiv lifts theirs. (01.11.2018)