President Petro Poroshenko has told a major German daily that he will ask Angela Merkel for non-lethal military support during his visit to Berlin. He said that the Minsk ceasefire had been broken more than 1,000 times. 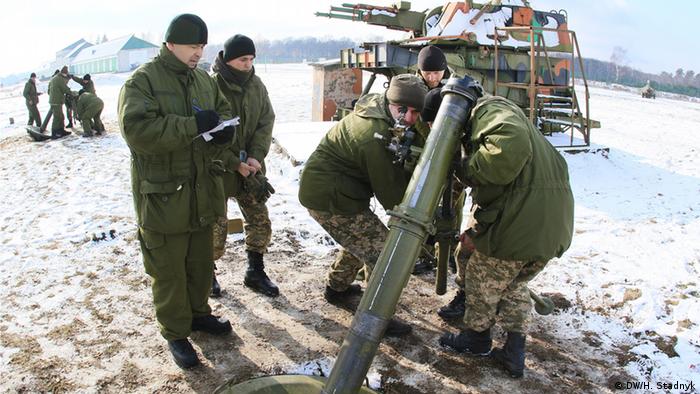 Petro Poroshenko gave a front page interview to the mass-circulation "Bild" newspaper on Monday, saying that Russia "knows no such thing as red lines any more" in the conflict in eastern Ukraine. Poroshenko said that 68 Ukrainian soldiers had died and 380 were injured since the latest Minsk ceasefire, saying that the truce had been broken "1,100 times in total."

"The entire world needs to understand that Russia is waging a war against Ukraine," Poroshenko said. "It began with Russian separatists, who were supported with Russian weapons in early 2014. And since the summer, regular Russian troops are in Ukraine - tens of thousands of soldiers. The only way to stop this war is the complete withdrawal of Russian troops."

The visiting president told Bild that he would ask Angela Merkel about procuring more non-lethal military equipment, such as radar, drones, radios and night-vision goggles, mentioning the protective vests already supplied by Germany. 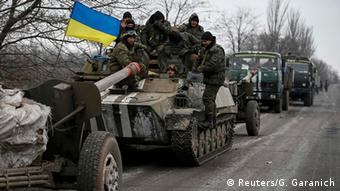 Poroshenko also called for a boycott of the 2018 World Cup in Russia, saying the competition was "unthinkable for as long as Russian troops are in Ukraine."

Steinmeier: 'We can't let up now'

German Foreign Minster Frank-Walter Steinmeier, speaking to the DPA news agency on Monday, said that Ukraine could still rely on Germany's "complete support," albeit also calling on Poroshenko to tackle key reforms like reducing corruption in Kyiv. The Social Democrat politician described the Minsk ceasefire deal as "fragile," but urged persistence on all sides.

"We cannot let up now. We must work with all of our power towards stabilizing what has already been achieved and making the next step into the political process marked out in Minsk," Steinmeier said. He also welcomed the IMF's emergency loans for the government in Kyiv worth $5 billion (4.7 billion euros), issued last Friday, saying they provided "breathing space." 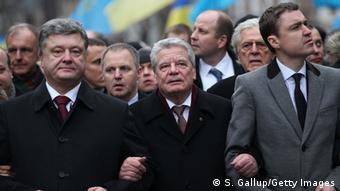 Poroshenko will be received in Berlin by President Joachim Gauck, prior to talks with Chancellor Merkel later on Monday, while people in Crimea mark the anniversary of a referendum that set the stage for Russia's annexation of the peninsula.

The 49-year-old president said that the Minsk ceasefire "is not working," and urged the international community to extend sanctions against Moscow at least until the end of the year. Asked about the prospect of a larger international conflict evolving from Ukraine, Poroshenko said "we must take off our rose-tinted glasses and recognize that the security structure which guaranteed peace in Europe for 70 years is no longer working."

As an example, Poroshenko pointed to the "powerless" UN Security Council, with Russia's permanent membership and effective veto power. However, he concluded by suggesting that the conflict in Ukraine had only galvanized the population, saying that President Vladimir Putin was hurting Russia's interests while believing he was advancing them.

"Ukraine was never as united as it is now in its desire to be a free and democratic country," Poroshenko said. "Through the Russian aggression, Putin has made our country more pro-European than almost anybody could ever have imagined."

Putin was 'ready' to use nukes in Crimea standoff

Vladimir Putin considered putting nuclear forces on alert to ensure the annexation of Crimea last March. Speaking on state TV, the Russian president said he had "defended the interests" of the former Russian peninsula. (16.03.2015)

More than 100 Germans fighting for separatists in eastern Ukraine

Dozens of German citizens have joined the ranks of pro-Russian rebel fighters in eastern Ukraine. Most of these are of ethnic German resettlers and have even been part of the German army. (15.03.2015)