More than 100 Germans fighting for separatists in eastern Ukraine

Dozens of German citizens have joined the ranks of pro-Russian rebel fighters in eastern Ukraine. Most of these are of ethnic German resettlers and have even been part of the German army. 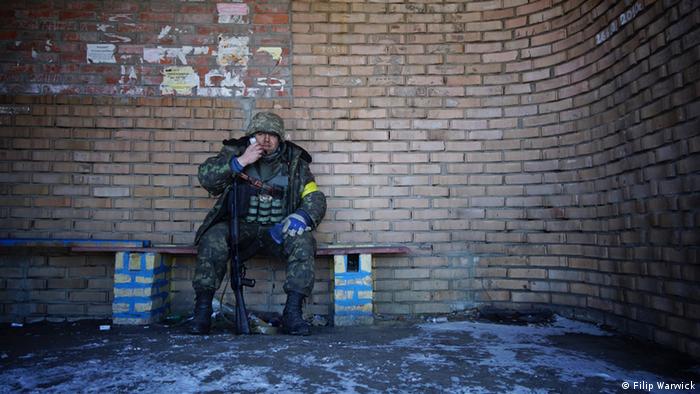 Pro-Russian rebels were being supported by more than 100 German citizens in their war against Kyiv, German weekly "Welt am Sonntag" reported on Sunday. Most of these were ethnic Germans from Russia who were repatriated by Berlin following World War II.

Unlike German jihadis who went to fight with the "Islamic State" in Syria, German citizens participating in the conflict in eastern Ukraine did not have to worry about facing prosecution back home, but this could soon change.

"When Germans participate in such conflicts, they should be punishable for organizing terrorist activities," Stephan Meyer, internal affairs expert for Germany's ruling coalition told Welt am Sonntag. Meyer demanded that German citizenship be revoked for people who participated in the separatist struggle and had double citizenship.

In Latvia, for example, soldiers fighting for foreign troops could face up to 10 years of imprisonment. This law was valid for all Latvian citizens who fought against the sovereignty of an internationally recognized state, the German weekly reported.

Meanwhile, Ukraine has its own misgivings with the "war tourism" from Germany. Andrej Melnik, Kyiv's ambassador in Berlin, told Welt am Sonntag he had asked the German government to ensure that German citizens "did not move towards the east [of Ukraine] or participate in the murders and deaths."

The German government expressed surprise at Kyiv's claims of its citizens moving to fight in the Ukraine conflict. The Attorney General, however, did not have sufficient evidence, the govenrment's statement said.

The German Interior Ministry however said there was evidence of individual German citizens participating in the Ukraine conflict, but that there were no clues about their motivations. "In case there was any information about a possible trip by persons intending to participate in the conflict in Ukraine, the knowledge would be used to prevent the persons' journey or make it difficult," the Welt am Sonntag reported the interior ministry as saying.

There are currently many German youths who post pictures of themselves with weapons and uniforms in the Internet, boasting of their participation in the Ukraine struggle. One German has lost his life fighting for the separatists on February 12, research by the German weekly revealed.

At least 6,000 people have died in the conflict in eastern Ukraine, where pro-Russia rebels seek autonomy from Ukraine. A ceasefire, signed in February this year, has proved to be delicate.

US to boost aid to Ukraine, sanctions on separatists

The US will reportedly increase aid to Ukraine's government and levy new sanctions on Kyiv's opponents. NATO's secretary-general has called on belligerents in Ukraine's civil war to let peacekeepers do their work. (11.03.2015)