Pope Francis ended his visit to Panama encouraging young people to make their dreams come true. He also condemned the violence in the Philippines and Colombia and called for a just and peaceful solution in Venezuela. 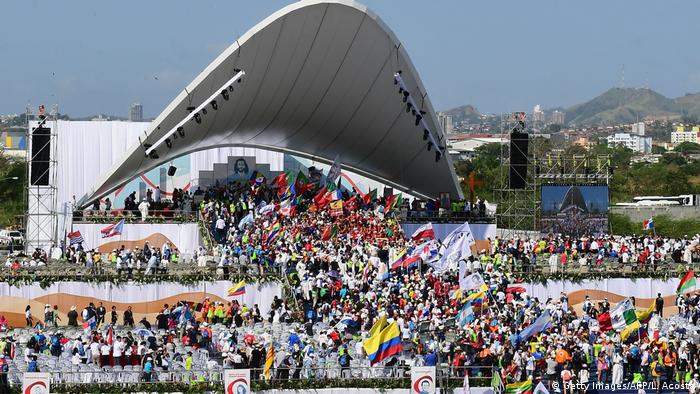 Pope Francis celebrated World Youth Day's final Mass for about 700,000 people in Panama City on Sunday as he wound up a five-day visit.

The crowd of pilgrims gathered with the presidents of Colombia, Costa Rica, El Salvador, Guatemala, Honduras, Panama and Portugal.

In a message of hope and encouragement to the region's youth, the Argentine pontiff urged young Catholics not to wait until some far-off future to make their dreams come true. "You, dear people, are not the future but the now of God," he told the crowd of pilgrims.

Life was not "in the cloud, waiting to be downloaded, a new app to be discovered, or a technique of mental self-improvement," Francis said. 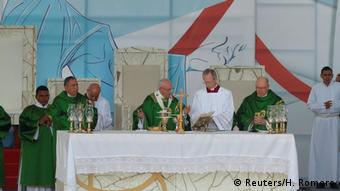 Pope Francis condemned the twin bombings which killed at least 20 people and injured 81 more at a Catholic service in the Philippines on Sunday as a "terrorist attack."

He also made a plea for peace in neighboring Colombia, condemning the "terrorist hatred" which led to a bombing earlier in January.

In his first remarks on the situation in Venezuela, Pope Francis called for a just and peaceful solution, respecting human rights: "Faced with the grave situation it is going through, I ask the Lord that a just and peaceful solution is sought and achieved in order to overcome the crisis, respecting human rights (and) the good of all the people of the country," he said.

The pope also visited a church-run home for people in Panama living with HIV.

"Many of the people we help here have been rejected by their families, by people in the street," said Domingo Escobar, director of the facility.

World Youth Day, the once-every-three year religious festival, was launched by then-Pope John Paul II. The Vatican announced on Sunday that the next edition would take place in Lisbon, Portugal in 2022.

The leader of the Catholic Church told hundreds of thousands of young pilgrims that they should welcome migrants, not stigmatize them. He said it was "senseless" to condemn every immigrant "as a threat to society." (26.01.2019)

Since becoming pope in 2013, Francis has tried to reform the Catholic Church by preaching and exemplifying humility. Some have applauded him for his efforts, while others have hurled criticism. (12.03.2018)