Pope Francis said Latin America had to address the "plague" of femicide, as well as drug and gang violence. He also slammed anti-migration rhetoric built on "fears and suspicions." 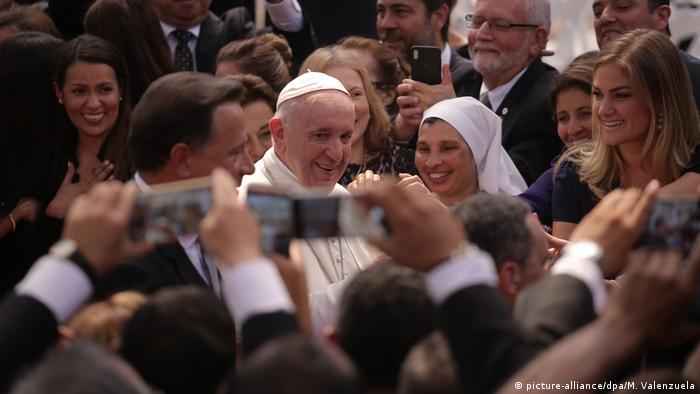 Pope Francis was in Panama on Thursday for World Youth Day — an annual Catholic event that actually takes place over five days. He used the trip to condemn violence against women in Latin America and to blast "fears and suspicions" of foreigners and immigration.

In a speech at a church named, like the pontiff, after St. Francis of Assisi, he spoke of the "plague" of femicide. According to the Economic Commission for Latin America and the Caribbean, around 2,800 women are killed in the region each year.

"The killing of women -- our continent is experiencing a plague in this regard," said Francis, the world's first South American pope. He also spoke of the toll drug trafficking and gang violence has taken on Latin America.

"Often families have been broken by an economic system that did not prioritize persons and the common good….And so, we see our young people without a home, without a family, without a community, without a sense of belonging, easy prey for the first charlatan who comes along."

Pope: The church should foster acceptance of foreigners

Later, in an early evening gathering of tens of thousands of young people at a park overlooking Panama Bay, the pope received a rock-star welcome.

Francis stressed that he did not want to create "a parallel Church," that would be thought of as "cool" by young people, but rather sought "constant freshness and youth" in the Church's activities.

He also used the opportunity to speak about immigration, especially poignant at a time when the White House is accused of stirring up suspicion against the Central Americans fleeing crime and poverty who want to come to the United States.

The pope told a group of bishops that the Church should foster acceptance and help facilitate "dialogue and help overcome fears and suspicions, and thus consolidate the very bonds that migrations — in the collective imagination — threaten to break."

A huge crowd gathered to hear the Vatican leader honor Jewish Holocaust victims and those persecuted by the Soviets. On the first papal trip to the Baltics in 25 years, Francis warned against resurgent anti-Semitism. (23.09.2018)

Pope Francis has told young people that populism starts by sowing hate. He noted Hitler and Nazi Germany rose to power through the use of populism. (23.10.2018)

The head of the Catholic church has condemned what he's called the exploitation of migrants for political purposes. Over 2,000 migrants are on the Greek island of Lesbos, one of the main entry points for asylum seekers in Europe.