The leader of the Catholic Church told hundreds of thousands of young pilgrims that they should welcome migrants, not stigmatize them. He said it was "senseless" to condemn every immigrant "as a threat to society." 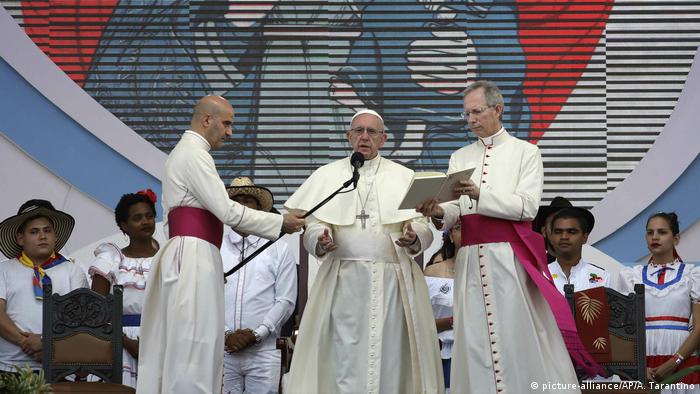 In remarks made to hundreds of thousands of young Catholics at World Youth Day in Panama, Pope Francis said Friday it was "senseless and irresponsible" to view migrants as a blanket threat to security.

"We want to be a church that fosters a culture that welcomes, protects, promotes and integrates, that does not stigmatize, much less indulge in a senseless and irresponsible condemnation of every immigrant as a threat to society," the pope said.

He spoke about learning "how to welcome and take in all those abandoned and forced to leave or lose their land, their roots, their families and their work."

The pope has made migration a key theme of his four-day trip to Panama, and his remarks provided a timely contrast to US President Donald Trump's continued insistence on the need to build a US border wall with Mexico.

Trump has used the migrant caravans from Central America that have reached the US border in recent months as part of his arguments for a wall. Many of the individuals in the caravans are seeking asylum from violence in their homelands.

While en route to Panama on Wednesday, Francis responded to reporters' questions about Trump's wall proposal by saying: "It is the fear that makes us crazy."

The pope has also previously described anyone who wants to build a wall to keep migrants out as "not Christian."

Francis' remarks on Friday were part of a religious ceremony that took place on the waterfront in Panama City.

In his wide-ranging speech, the pontiff also touched upon issues of environmentalism and consumerism, themes he has addressed on past occasions.

The environment was being "trampled underfoot by disregard and a fury of consumption beyond all reason," he said.

Francis also lamented a lack of solidarity, saying that society "has lost the ability to weep and to be moved by suffering" and many people "are singled out and treated as responsible for all society's ills."

The pope spent Friday morning visiting juvenile jails to comfort young inmates who could not attend the gathering. He has often visited prisons during his overseas trips and supports the rehabilitation of inmates.

While many have lauded the pope for his progressive views, he has been battling to contain fallout from widespread revelations of systemic sexual abuse in the Catholic Church.

During Friday's speech he said that some young people ended up trapped in "networks of unscrupulous people" that include members of the church.

Hundreds of thousands of Catholic pilgrims from around the world have descended on Panama City to take part in the Roman Catholic Church's World Youth Day, a five-day annual event focused on faith and youth. It ends on Sunday.

The Vatican has given Rome's homeless people the Christmas gift of a health clinic near St Peter's Square. The Mother of Mercy health office reflects Pope Francis' determination to help society's weakest people. (22.12.2018)