Pope Francis has reminded Christians that their messiah was born in poverty and said they should focus on love and charity instead of "consumerism." The event in St. Peter's Basilica was attended by 10,000 people. 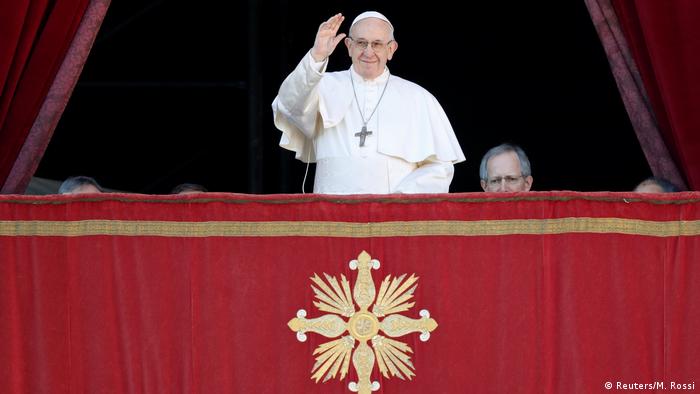 Pope Francis used the Christmas Eve Mass to condemn the pursuit of riches on Monday, and urged Christians to consider Jesus' humble birth story. According to the New Testament, Christ was born in a Bethlehem stable and was then placed in a manger.

"Standing before the manger, we understand that the food of life is not material riches but love, not gluttony but charity, not ostentation but simplicity," the pope told the worshipers gathered in the Vatican.

"An insatiable greed marks all human history, even today, when, paradoxically, a few dine luxuriantly while all too many go without the daily bread needed to survive," he added.

The 82-year-old pontiff led the midnight mass before nearly 10,000 people gathered in St. Peter's Basilica, the biggest Christian church in the world. Since becoming the Church's leader in 2013, Francis has focused on the issues of poverty and inequality.

Two days earlier, the Vatican said it had gifted a new clinic in St. Peter's Square aimed at helping the homeless in Rome. The Church also opened a shower and a barber shop for the homeless at the square in 2015.

On Monday, Pope Francis urged Catholics not to "slide into worldliness and consumerism" and instead ask themselves, "Do I break my bread with those who have none?"

'Our differences are a source of richness'

During his annual Christmas Day "To the city and the world" speech on Tuesday, Francis chose to highlight conflicts in the Middle East such as the violence in Yemen, the Syrian civil war and the Israeli-Palestinian conflict. He asked for both Palestinian and Israeli leaders to restart peace talks, and said that the international community must  finally bring relief to all those children and people exhausted by war and famine," in Yemen.

The pontiff also called on humanity to remember that "our differences... are not a detriment or a danger; they are a source of richness."

"What is the universal message of Christmas? It is that God is a good Father and we are all brothers and sisters."

The Vatican chief has faced increased pressure in 2018, as a decades-long scandal relating to child abuse reached some of the Church's most senior figures.

On Friday, the Pope restated that he would go after child predators within Church ranks.

"To those who abuse minors I would say this: Convert and hand yourself over to human justice, and prepare for divine justice," Francis said in an address to Vatican officials.

The pontiff is due to give another major address on Christmas Day on Tuesday, known among Catholics as the Urbi et Orbi (to the city and the world) speech. Such speeches are delivered at Christmas, Easter, and when a new pope assumes office.