At least 20 people have been killed in two explosions outside a church during Sunday Mass in the southern Philippines. The government has released footage of the suspects and asked locals to help find the perpetrators. 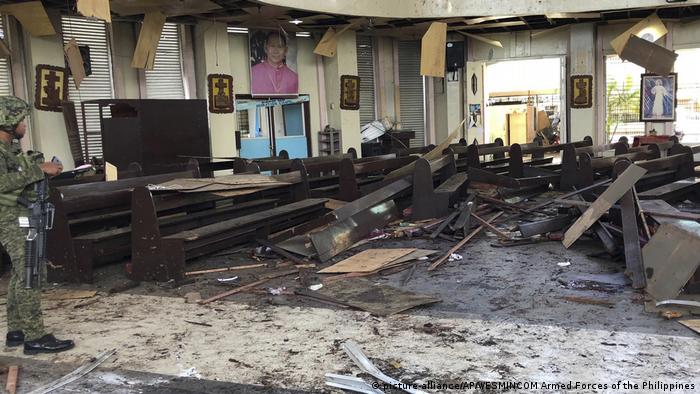 Two bombs have exploded outside a church during Sunday Mass in the southern Philippines, killing at least 20 people and injuring more than 100, officials have said.

The first bomb went off outside the Roman Catholic cathedral on Jolo island in Sulu province, and a second one exploded a minute later near the main entrance.

Images from the scene showed the door, pews and glass windows of Mount Carmel Cathedral were blown off, and bodies were strewn across the ground, a photographer working for the Agence France-Press (AFP) news agency said.

President Rodrigo Duterte's spokesman condemned the incident as an "act of terrorism and murder."

"The motive is surely ... terrorism. These are people who do not want peace," regional military spokesman Lieutenant Colonel Gerry Besana told AFP.

He said investigators were focusing on determining the type of explosives used in the attack to help identify a suspect.

The "Islamic State" (IS) militant group on Sunday claimed responsibility for the double bomb attack, saying two suicide bombers had detonated explosive belts, according to the SITE Intelligence Group which monitors jihadist activities.

Philippine authorities on Tuesday released security footage of the suspected Islamist militants who carried out the attack and urged locals to help track down the perpetrators.

Four suspects can be seen on the footage, according to Colonel Noel Detoyato, chief of the military's public affairs office. Authorities are looking for a total of six "persons of interest," including a woman who left a bag on one of the pews inside the church before the first explosion, according to witnesses, he said.

"The improvised explosive device was placed in a bag, and a woman left it and then it was remotely detonated," Detoyato added, contradicting claims by the Islamic State terrorist network that the attack was carried out by suicide bombers.

One of the men in the footage was identified as a member of a group affiliated with the Abu Sayyaf terrorist group, Besana said. He was believed to have been holding a mobile phone that was used to trigger the bombs, Besana said.

Marawi grapples with IS legacy

The twin blasts occurred nearly a week after minority Muslims in the mostly Roman Catholic nation approved a new autonomous region in the southern Philippines.

Although most of the Muslim areas approved the autonomy deal, voters in Sulu province, where Jolo is located, rejected it.

Jolo island has been a stronghold of Abu Sayyaf, an Islamist extremist group labeled as a terrorist organization by the United States and the Philippines.

The group is known for bombings, beheadings and kidnappings.

Defense Secretary Delfin Lorenzana ordered security to be stepped up across the province, amid concerns of further attacks.

"I have directed our troops to heighten their alert level, secure all places of worships and public places at once, and initiate pro-active security measures to thwart hostile plans."

Muslims in the southern Philippines voted on Monday in a referendum to create a new autonomous region that seeks to end decades of unrest there. DW spoke to analyst Joseph Franco about the implications of the vote. (22.01.2019)

WorldLink: Fighting back against Islamic State in the Philippines