Poland's national art gallery has removed a video installation featuring a human interaction with a banana on moral grounds. People took to the streets with bananas to protest what they call censorship. 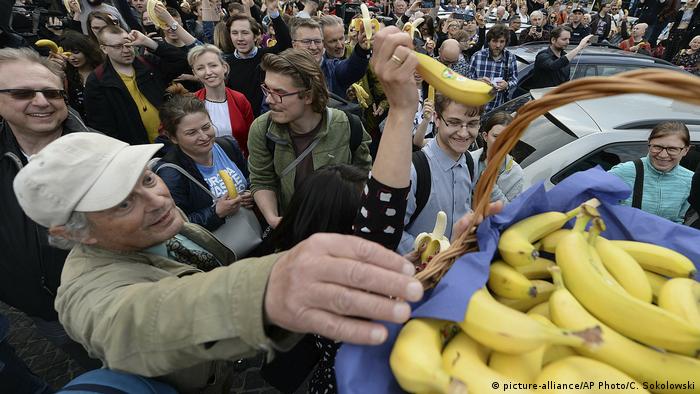 Hundreds of people ate bananas outside Poland's national gallery in Warsaw on Monday to protest claims of censorship.

Miziolek told online news portal Onet.pl he was "opposed to showing works that could irritate sensitive young people" and that visitors had complained about the piece. Also removed was a 2005 video by Katarzyna Kozyra that showed a woman holding a leash attached to two men dressed as dogs on all fours.

"Certain topics related to gender shouldn't be explicitly shown," he was quoted as saying by Polish newspaper Gazeta Wyborcza.

On Monday, he claimed the videos would be restored in May, however the gallery is scheduled for renovation works at that time, prompting fears the works would not return.

Miziolek was appointed by the right-wing Law and Justice (PiS) government's Ministry of Culture. The ministry has consistently cut funding for the arts and fired arts staff who do not follow the party's line.

The ministry denied it was involved in the decision to remove the artworks.

At the protest on Monday night, people ate bananas and posed with bananas. The protesters were supported by a social media campaign with a similar theme with the hashtags such as #jesuisbanan and #bananagate.

"We are against censorship in our country, especially in arts," 25-year-old lawyer Marta Syrewicz told the AFP news agency at the protest, banana in hand.

Actress Magdalena Cielecka posted an image of herself holding a banana like a gun to her head. She told The Associated Press that she was against any ideological or political limits on artists.

"An artist, to create, must be free," Cielecka said.

Ahead of parliamentary elections later this year, PiS has been promoting conservative, traditional values, while embracing Catholicism and rejecting the promotion of LGBT+ rights.

Each evening DW's editors send out a selection of the day's hard news and quality feature journalism. You can sign up to receive it directly here.

Poland's national conservative government has removed the progressive director of its cultural institute in Berlin, according to two German newspapers. One complaint was about "too much Jewish-themed content." (06.12.2016)

Polish police have seized computers from an anti-racism group. The raids come as the German branch of Reporters Without Borders has accused Poland's increasingly authoritarian government of suppressing free expression. (03.02.2017)