Polish grannies demonstrate for democracy | Europe | News and current affairs from around the continent | DW | 06.05.2021

They call themselves the "Polish Grannies," but instead of crocheting, they're demonstrating for a free press, the rule of law, and carrying rainbow flags while they do it. And that hasn't made them a hit with everyone. 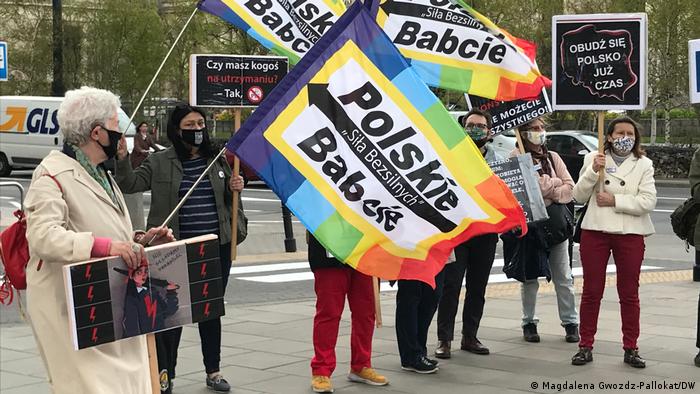 The Polish Grandmas take to the streets of Warsaw every Thursday

There's an after-work mood in the air in Warsaw on a recent Thursday evening  with all the usual hustle and bustle on the streets between the Palace of Culture and the city's central train station. People are in a hurry, as most of them stare at their cell phones.

But a small, colorfully dressed group of mostly elderly women stand out in the grey crowd. They call themselves the "Polish Grannies" and want to be more than the cliché image of elderly women who prepare dumplings, crochet and play with her grandchildren. While they do all those things as well, they also take to the street.

Many of them have been demonstrating on a regular basis for the past six years now carrying European and rainbow flags. They chose a flag similar to the LGBT+ community's rainbow flag as their symbol, with the words, "Polish Grandmas, the strength of the powerless" adorning it.

As they stand on the street, the words "It will be beautiful, it will be normal," blast from nearby loudspeakers. These are the lyrics to a cult song popular at the end of the communist dictatorship in 1989 — and they have become popular again with the outbreak of the coronavirus pandemic. 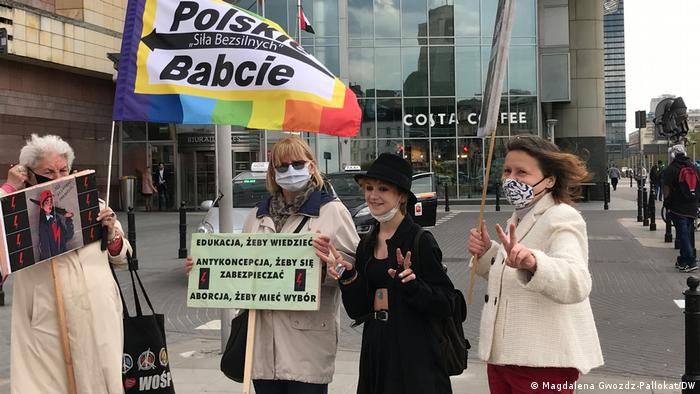 The colors of the rainbow instead of white and red

A young woman gives the group of older women a thumbs up and another wants to take photo with them, while other pedestrians look more skeptically at the group.

"Young people often applaud us," Krystyna Piotrowska, who turns 70 this fall, told DW. "Recently a young woman came up to me and thanked me for what we're doing. She said, thanks to us, she felt safe."

Similar reactions are not as common among people her own age.

"We get curses you don't want to hear, believe me," Piotrowska said, adding that there are also unpleasant situations when their flags are ripped out of the hands or when they're told they should be carrying the white and red Polish flag instead of a more colorful rainbow one.

The women said such situations won't discourage them.

"I am driven by anger. It may have a bad reputation, but it is necessary to act," said Piotrowska, a three-time great grandmother.

What started as protests against particular events, such as to show support for judges critical of the government, grew into weekly demonstrations and draw the women for a variety of reasons. 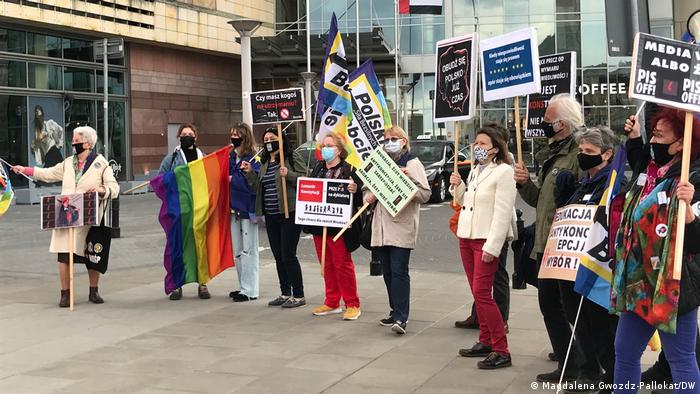 For 77-year-old Anna Labus, it's about the fight against the "destruction of the Polish constitution." Another participant said she was there to support an "independent and free press" in Poland while another said she is worried about the country's education system.

"I can't sit quietly at home because any breach of the law hurts," Labus told DW. She said if the Polish Constitutional Court rules in favor of the governing national-conservative Law and Justice Party (PiS) in an upcoming decision on whether Polish orEuropean law should have primacy, it would have the country heading in the wrong direction.

She said she has specific demands: "The EU should pay more attention to the funds flowing into Poland and set conditions for those funds so our country will once again follow the rule of law."

The people for, against and the indifferent

And what about her fellow citizens who think very differently on the matter? "The 30% who voted for the national-conservative PiS Party compensate for their failures with the social benefits they receive from the state," Labus said. "None of them are thinking about where the money is coming from." 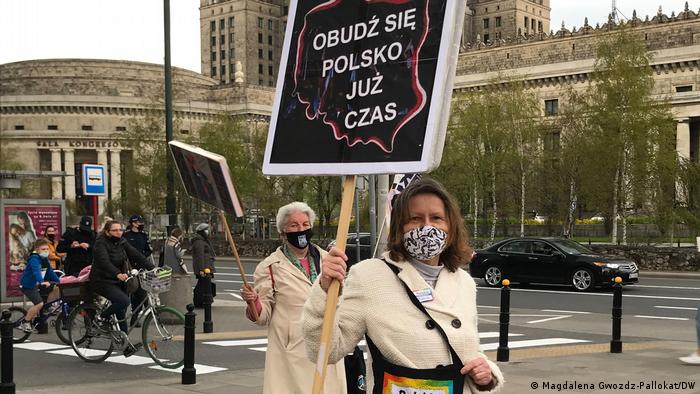 In 2019, PiS won the most support, more than 55% of it, from voters over 60, the same generation of the Polish Grannies.

Despite being of similar age, PiS supporters are the hardest for the demonstrating women to reach.

In fact, they've never been able to convince an older person on the other side of the political aisle, Kowalska said.

"They're very stubborn and not at all interested in what we're doing," she said. "Some people have trouble walking but they still come to our meetings to yell at us."

But it's not only the PiS supporters who anger Labus.

"The worst ones are the people who are indifferent, and they, unfortunately, are in the majority," says Iwonna Kowalska, the chairwoman of the Polish Grannies. "They still have their cell phones, their passports, their Internet and they can travel. They are not aware of what is being taken away from them step by step and that it soon could be too late for them to stop the process. We're trying to explain things to them." 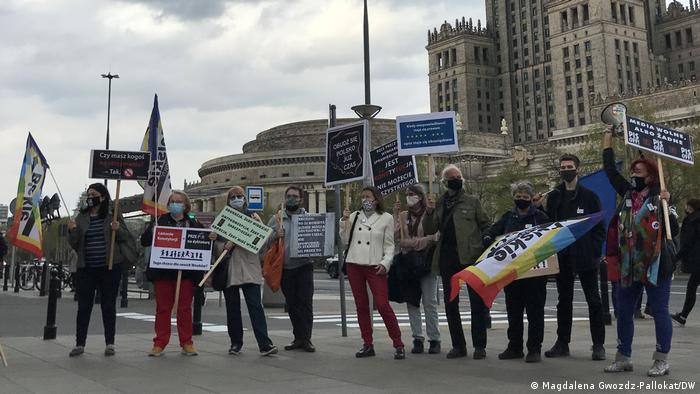 The goal is to create awareness

The most important thing for the seniors taking to the streets each week is to continue fighting so that their grandchildren can live in a democratic Poland.

"I probably won't be alive when my grandchild is grown up," said the 67-year-old Kowalska. "But it is important for me that she remembers me as someone who fought for her rights."

She said it's inconceivable to leave behind a country in which her granddaughter can only, as she put it, "make dumplings."

Remembering the dictatorship and that democracy can blow away

Kowalska grew up during communist rule in Poland, and people of her era fought against the system and for the right to live in a democratic and free county.

"Back in 1989, we thought we had democracy and that it would last forever," she said. "But then it turned out that democracy is something that can just blow away. If you don't constantly pay attention to the fundamental values of a society, that everyone should stand up for, you can suddenly have no more democracy." 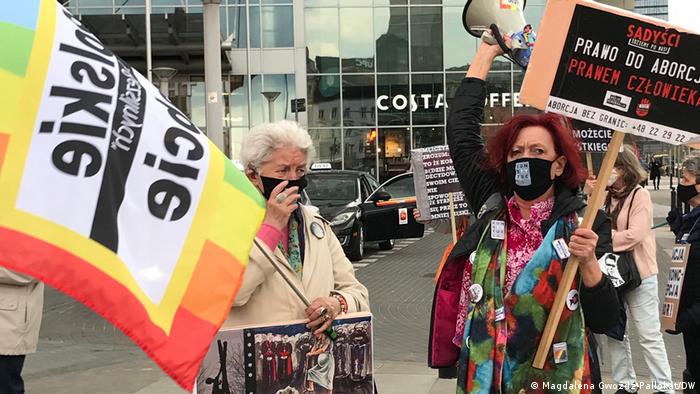 Nationalists have grandmas, too

The women not just about taking to the streets but also want to sit down and discuss issues as well, "in the struggle against growing fascism."

Meeting nationalists marching through Warsaw face to face was an idea they were able to put into practice. In a recent newspaper interview, some activists even considered whether it would make sense inviting their nationalist adversaries over for cake: "After all, nationalists too have grandmothers."

Poland's new housing estates are communities, but not for everyone

Brussels is increasingly tired of what it sees as Warsaw's recalcitrance. But it also knows that Poland leaving the EU could damage the bloc's project perhaps even more than it would hit Warsaw's pocket.

The ruling underlines the ongoing rift between the EU institutions and the Polish government over the rule of law. Critics say the way judges are appointed has become a tool to politicize the judiciary.

The legal tool, which has never been used before, could see Hungary stripped of its EU funding for breaching the bloc's democratic standards.