Neo-Nazis face an old enemy in Grannies Against the Right | Germany | News and in-depth reporting from Berlin and beyond | DW | 14.11.2020 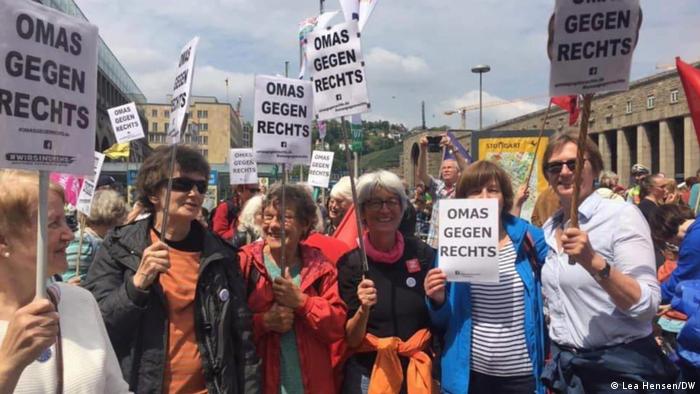 On January 27, 2018, the anniversary of the liberation of the Auschwitz death camp, an energetic pensioner in the Black Forest was scrolling through her list of Facebook friends. And she was furious.

She wanted to do something, but her computer was slow, perhaps because she's saved so many documents and photos to her desktop. Little by little, the website loads: a new Facebook group. The woman gives the group a name and sends invitations to all her contacts. Soon the membership will grow to number in the thousands.

Anna Ohnweiler, 70, said there have been several moments in her life when she has been "galvanized into action." Moments when she — a former teacher, the head of a social services provider in Baden-Württemberg — felt she had to speak out. She's written more letters and started more petitions than she can remember — some of them going to Helmut Kohl back when he was chancellor. German Chancellor Angela Merkel has received some both recently and back when she was the minister for women and youth. 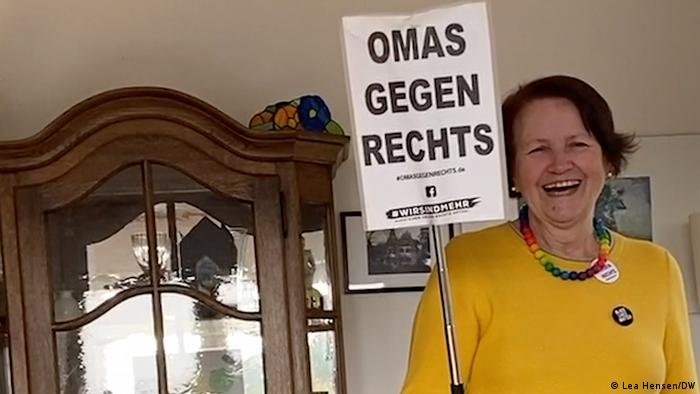 Ohnweiler doesn't always get a reply, but that, the plucky woman who retired in 2015, said, is not always the point. The point, instead, is nothing less than maintaining a free and open society. Rubbing her hand through her short hair, she chooses her words carefully, stating her motto loud and clear: "Those who fall asleep in a democracy will wake in a dictatorship."

Ohnweiler knows what she's talking about. She grew up in neo-Stalinist Romania. Under Communism, she said, criticism and resistance were unthinkable. Now she keeps her life's motto in mind — it's part of what motivated her to start the Facebook group "Grannies Against the Right." This time around, though, something is different. Perhaps for the first time, her strong faith in democracy is tinged with fear.

A rebellion of grannies and grandpas

A four-room apartment on the sixth floor in the southern German town of Nagold. There's a view of the Black Forest from the balcony, and the only sound is the ticking of a clock. Here, time seems to have stood still. The décor is from the 1980s; oak furniture, boldly patterned carpets, and the sun shining through brightly colored glass pictures by the windows. On the shelf, books about the Holocaust sit alongside picture books about the Romanian region of Transylvania. Photo collages on the wall show Ohnweiler's two adult children and her three grandchildren, aged 5, 8 and 14. A postcard proclaims, "Granny, I love you."

In between the family photos is Ohnweiler's niche, a table covered with doilies. She has embraced her role as a granny and politicized it. The Grannies Against the Right initiative had already existed in Austria. In Germany, it started with that Facebook group, which now has more than 3,000 members. In 2019, Ohnweiler and other "grannies" formed an association. There are "grandpas" among them, too; about a fifth of the organization is male.

It was on that day in January 2018 that Ohnweiler was first overcome by the anger that motivates many of the group's members. She saw a comment on Twitter by a Salzburg-based member of the right-wing extremist Identitarian Movement. This man was moaning about the group of elderly women protesting against Austria's right-wing populist Freedom Party. Ohnweiler recalled his words as along the lines of: "When you're too old to be any use to society and emancipation means you never learned to knit." 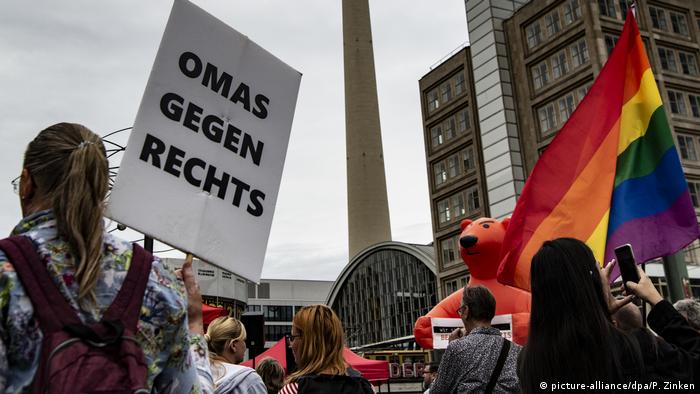 Grannies Against the Right are visible at demonstrations all across Germany

Her voice still trembles with outrage. "Worthless lives?" she asks, wide-eyed. She talks about how the old and the sick were murdered under the Nazis and comments on how Germany's far-right Alternative for Germany (AfD) party has brought Nazi terminology back into mainstream German politics. Ohnweiler said she could not stay quiet in the face of hate. Instead, she starts to list the damage right-wing language is doing to democracy, how it creates division in society. Nearly every day, she spends three or four hours online looking for examples, which she then shares in the "Grannies" Facebook group.

'Protesting out of conviction'

She wears a Grannies Against the Right button, makes placards, and attends vigils whenever neo-Nazis march in Germany. She speaks with enthusiasm of the "Inseparable" demonstration in Dresden in August 2019, the first big rally for the German Grannies group. People came from all over the country, "We had the feeling we were really making something happen," she said.

The alliance is currently active in more than 70 towns and cities. Members work to ensure that the past is not forgotten; they organize information stands ahead of elections and arrange for Stolpersteine – brass plaques commemorating victims of the Nazi regime – to be set in pavements. They also support the Fridays for Future movement. 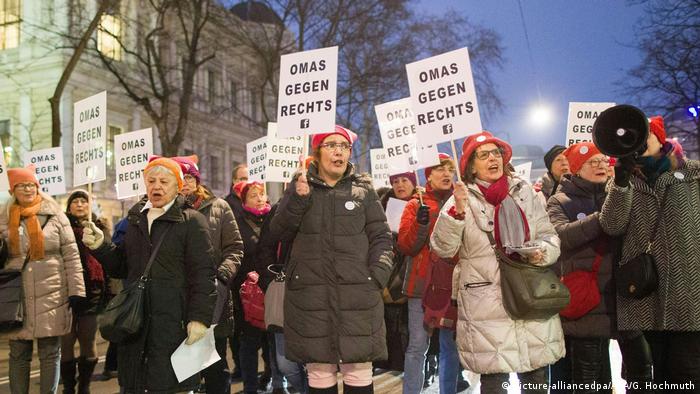 The Grannies Against the Right movement started in Austria, these demonstrators are in Vienna

Because, for them, this is all about the future of their grandchildren. Not all members are "grannies" and "grandpas" in the literal sense; in fact, some of them are too young. But it's conviction, not age, that matters, Ohnweiler said. Many of the movement's members belong to the post-war generation. They heard about the horrors of National Socialism directly from their parents and want to take action.

Ohnweiler's parents were deported to a Soviet work camp after the war. Her family belonged to the German minority in Transylvania. Many Romanian Germans had served the Third Reich under Hitler: "When the war was over, people took their revenge," she said. Romanian Germans were dispossessed, oppressed, discriminated against. Ohnweiler knows what her family history has taught her: "No more war, no more exclusion, no more destruction."

She was also strongly influenced by the lack of freedom in Romania under the dictatorship of Nicolae Ceausescu. There's a photo of her as a young woman with her school class, a row of boys and girls. She almost wasn't allowed to take her school-leaving exams, Ohnweiler said, laughing, because she had encouraged other girls to wear miniskirts. She's written poems recalling her younger days as a rebellious advocate of women's rights: "Her skirt is too short, her hair too long, her gaze too bold, her gait too proud – they are scandalized." Another photo shows the young Anna with her grandmother. "She was a self-assured woman, a big influence on me." 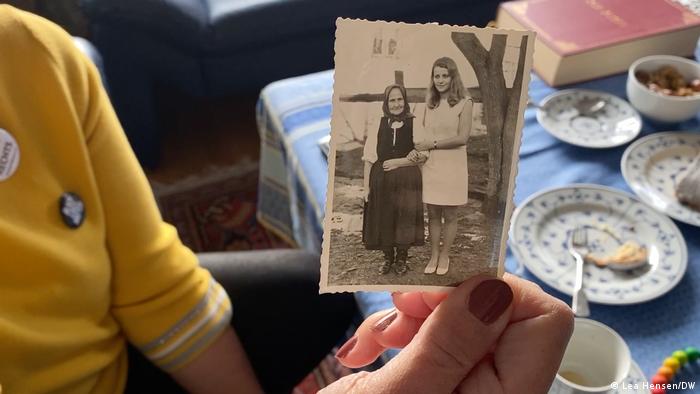 Ohnweiler and her own grandmother in Romania

When Ohnweiler's husband fled to Germany, she was banned from working as a teacher in Romania. She was allowed to emigrate in 1979 and went to work for the Christian Association of Youth Villages in Nagold. Later, she started at night school.

With "Grannies Against the Right," Ohnweiler said she wants to maintain her involvement in Germany's political discourse well into her retirement. She emphasized that the initiative is, of course, non-partisan. This is very important for the "Grannies" and is written into the statutes of the organization.

Read more: Does Germany do too little to remember victims of racist terror?

Fear did once find its way into her mailbox. In early February 2019, she was sent a threatening postcard – hate speech lambasting her activities as a "Granny" in the vilest of terms. The authorities were informed, but they could not identify the sender.

Her children were anxious, but Ohnweiler smiles; no, she can't prevent things like this. Hate mail doesn't get under her skin, either.

"I believe fear is a bad counselor," she said. "If it spreads to such an extent that no one is prepared to speak up, that's when our democracy really is in grave danger."

Gerald Asamoah was a star on Germany's national football team. Now he works with young people at the Rosa Parks School in Germany to promote tolerance and understanding, so that xenophobia and violence don't take root.