Poland and Israel at odds over Holocaust restitution | Europe | News and current affairs from around the continent | DW | 13.05.2019

Poland and Israel at odds over Holocaust restitution

The Polish government is refusing to discuss what will come of assets seized from Jewish Holocaust victims. Now talks with an Israeli delegation have been called off at the last moment. 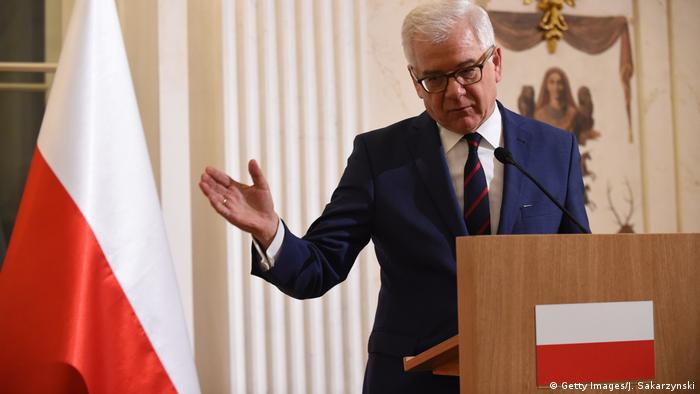 The Israeli government delegation had already arrived in Warsaw by the time Poland's Foreign Ministry canceled bilateral talks planned for Monday. "The Israeli side had worked toward a meeting with representatives of the Polish Foreign Ministry some time ago, and various issues were on the agenda," Polish Foreign Ministry spokesperson Ewa Suwara told DW. "Over the past days, however, the composition of the delegation has changed, and that led us to assume that the return of the property of Holocaust victims was to be the main issue."

The spokesperson said the ministry does "not hold talks at all about the return of the property."

Before World War II, 3.5 million Jews lived in Poland, making up 10% of the population. More than 90% of them were killed in the Holocaust, and their property was looted by German Nazis or nationalized, as was most Polish private property, by the post-war communist government.

No return of Jewish property

Poland has no reprivatization legislation regulating the compensation of former Polish or Jewish property. Since the end of communism, only private individuals or companies based both in Poland and abroad can claim looted or nationalized property through the courts. In 2009, Poland was one of 47 countries to sign the Terezin Declaration on Holocaust Era Assets and Related Issues but the country has never followed up with legal regulations.

Speaking at a press conference in Warsaw, United States Secretary of State Mike Pompeo called for "complex legislation on the restitution of private property" of Polish Jews. Under the recently adopted JUST (Justice for Uncompensated Survivors Today) Act 447, the US government is required to inform Congress about the progress countries are making concerning restitution legislation following the Terezin Declaration. 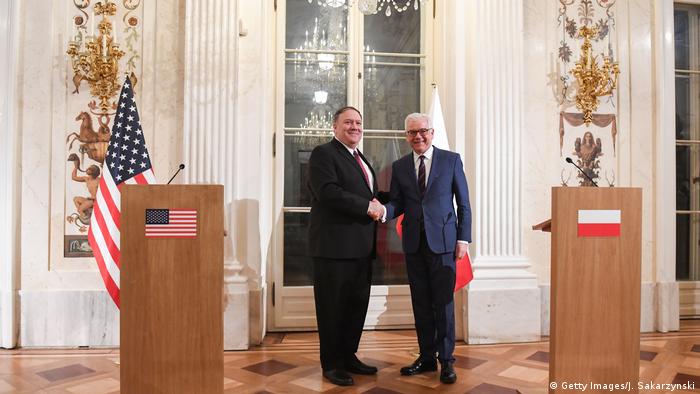 US Secretary of State Pompeo traveled to Warsaw in February

Even before it was passed, the US law sparked protests in Poland. Polish nationalists demonstrated in front of the US embassy in Warsaw in 2018, chanting "the Jews will not get any money from the Poles." The National Radical Camp, or ONR, a far-right extremist group, has claimed that there is more than $300 billion (€267 billion) "the Jews plan to steal from Poland."

Just days ahead of the May 26 European Parliament elections, followed a few months later by Polish parliamentary elections, Poland's governing right-wing Law and Justice (PiS) party has joined the debate. At one of the currently popular "patriotic picnic" events, PiS leader Jaroslaw Kaczynski said "Poland has no obligations resulting from the war, neither legally nor morally." He stressed Poland also suffered from the war and should be the one receiving compensation.

"Some countries west of Poland owe us hundreds of trillions of euros or more," Kaczynski said, addressing Polish reparations demands on Germany, a hot-button issue in Poland. Although Poland has not made any official demands, politicians regularly bring up the issue.

As long as the PiS is in power, not a single Polish zloty will be spent on compensation without justification, because "one must adhere firmly to the historic truth," said Interior Minister Joachim Brudzinski. 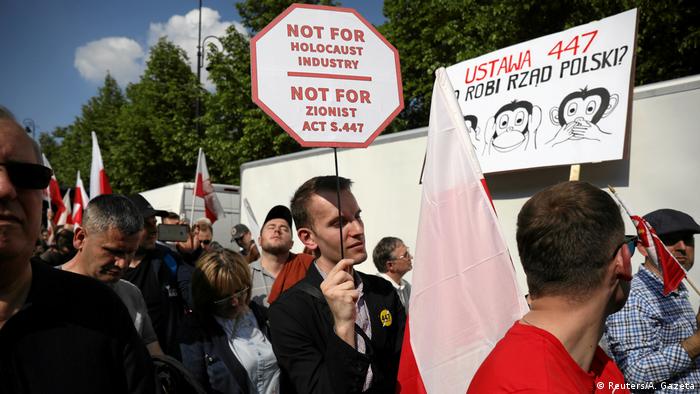 Right-wing nationalists in Poland have protested against Holocaust reparations

The "historic truth" about the Holocaust is a touchy chapter in Polish history. A 2018 law — toned down somewhat since it was initially brought forward — stipulated prison sentences for anyone who dared mention the fact that some people in Poland during World War II might have collaborated with their Nazi occupiers.

Several historians have pointed to the law as a sign of growing anti-Semitism in Poland, while at the same time, some statements by Israeli politicians have been regarded as being anti-Polish. Remarks earlier this year by the Israeli prime and foreign ministers concerning Polish participation in the Holocaust and that "the Poles suckle anti-Semitism with their mothers' milk" triggered a spate of critical comments in Poland.

On Saturday, thousands of nationalists marched through Warsaw to protest restitution of property seized in the Holocaust as well as the US law. The demonstrators also demanded a rigorous response by the Polish government to "attempts to steal Polish property."

The PiS has distanced itself from the right-wing extremists, but in the ongoing election campaign, the party has been trying to woo voters on the right. The fact that government representatives marched alongside right-wing extremists in a nationalist demonstration in November 2018 was a clear message. Critics say it is unlikely that canceling restitution talks with the Israeli government delegation just days after the most recent nationalist march in Warsaw is simply a coincidence.

Inside Europe: A Polish call for war reparations