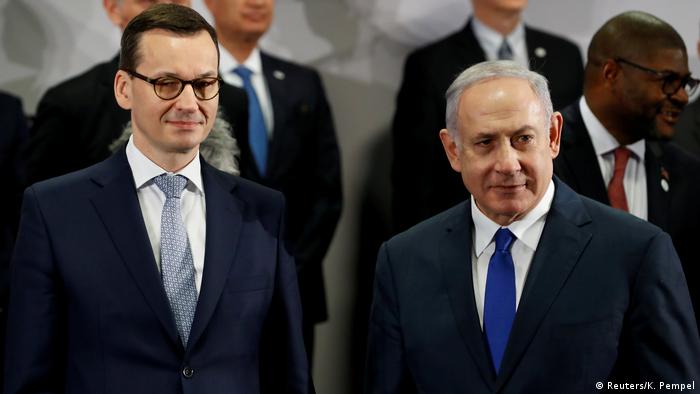 A dispute between Israel and Poland about alleged Polish collaboration with the Nazis in World War II is threatening to overshadow a two-day meeting of central European countries in Jerusalem.

Polish Foreign Minister Jacek Czaputowicz was then scheduled to meet with Netanyahu and the leaders of the other three Visegrad members, Hungary, Slovakia and the Czech Republic instead.

On Monday, however, Chief of Staff Michal Dworczyk told Polish broadcaster Jedynka that the Polish delegation may not participate at all.

'Poles cooperated with the Nazis'

The move came after Poland's nationalist government criticized Netanyahu for saying "Poles cooperated with the Nazis" to kill Jews during Germany's occupation of Poland.

Netanyahu, who made the comments in Poland on Thursday, said he had been misquoted by Haaretz and other Israeli newspapers. His comments did not mean to implicate all Poles, he added.

Poland said the explanation was insufficient and summoned its ambassador to Israel in response.

Netanyahu has been seeking Visegrad support for Israel's policy toward the Palestinians amid signs that their attitude on the matter is diverging from the rest of the European Union.

Hungary and the Czech Republic reportedly blocked a joint EU statement in May 2018 that would have criticized the relocation of the US Embassy from Tel Aviv to Jerusalem.

At the United Nations, all four Visegrad states have frequently abstained from voting against Israel in the General Assembly.

The latest dispute between Poland and Israel broke out a year after they sparred over a Polish law that banned anyone from accusing Poland of collaborating with the Nazis.

Amid mounting pressure from Tel Aviv and Washington, the government changed the law so that no one found guilty would be sent to prison.

The law was part of the government's efforts to highlight Nazi crimes against Poles during World War II. Some 6 million Polish citizens, including 3 million Jews, died during the 1939-1945 German occupation.