Four were found dead on the Poland-Belarus border, three Iraqi men in Poland and one Iraqi woman in Belarus. The Polish prime minister spoke of "dramatic events and Belarusian provocations." 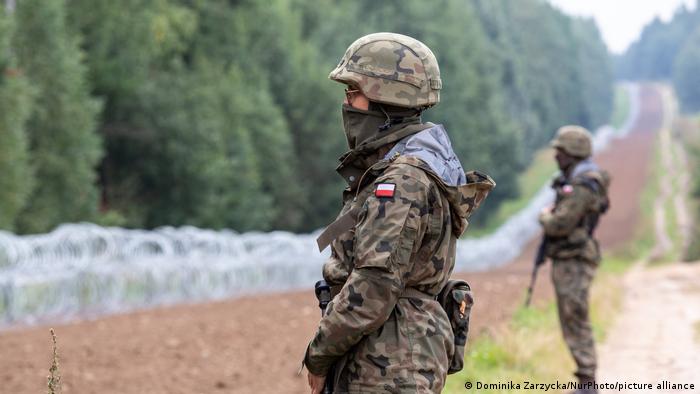 Polish officials said Sunday the bodies of three men, believed to be Iraqi nationals, were found on the Polish side of the Poland-Belarus border while Belarusian authorities announced an Iraqi woman was found within a meter of the border.

The Polish Prime Minister Mateusz Morawiecki said on Facebook that he was in contact with the interior minister as well as the head of the border guards. Morawiecki said links between these "dramatic events and Belarusian provocations" would be investigated.

Poland's border guards said on Twitter they are opening an investigation into the deaths.

State of emergency on Poland-Belarus border

EU member-states Poland, Lithuania and Latvia, which border Belarus, have come under increasing pressure as Belarusian strongman Alexander Lukashenko has opened a backdoor route for migrants into the EU.

Poland, Lithuania and Latvia have labeled the recent influx of migrants a "hybrid attack" carried out by Belarusian President Alexander Lukashenko with the aim of destabilizing Europe and the EU.

Poland and Lithuania are building razor wire fences and increasing border patrols. Both have declared a state of emergency along the border areas in an effort to halt, but more likely will only stymie migrant flows.

One week ago, Poland declared a state of emergency along the border, barring any non-residents of the area access to the border zone. It was the first time such measures were imposed since the communism period in Poland ended in 1989.

Soaring numbers of migrants crossing from the east

Anna Michalska, a spokeswoman for the Polish border guards, said there were over 3,800 attempts at illegal crossings from Belarus in September and over 320 just on Saturday alone.

Michalska told Polish media of a separate incident on Saturday where eight migrants, three women and five men, were stuck in the swamps near Poland's border with Belarus.

That group was rescued by the joint efforts of Poland's border guards, police, firefighters, military and airborne ambulance service.

Western governments slapped sanctions on the government of Alexander Lukashenko for a brutal crackdown on civil society following last year's disputed election that brought hundreds of thousands out into the streets in protest.

EU officials and German Chancellor Angela Merkel have condemned this latest crisis brought on by a leader described as Europe's last dictator.