Some EU officials have claimed Minsk is using "hybrid warfare" by deliberately sending migrants to Lithuania. Poland has sent additional troops to its border with Belarus to handle the influx. 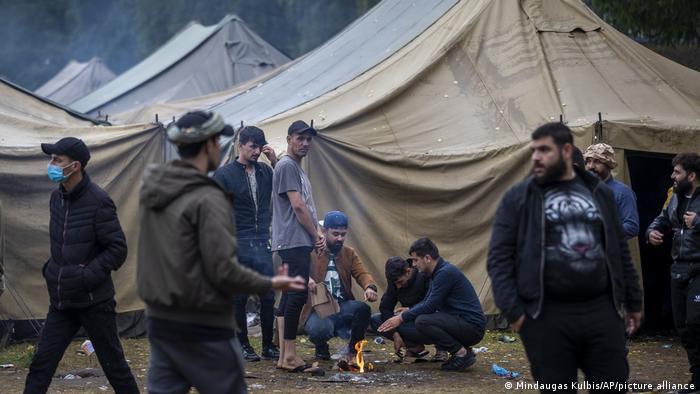 Many of the migrants coming into Lithuania originally hail from Iraq

EU ministers on Wednesday are discussing how the 27-member bloc should react to Belarus "deliberately" sending migrants to Lithuania.

Some laid the blame squarely on President Alexander Lukashenko.

Poland has deployed more than 900 additional troops to its border with Belarus to deal with an influx of migrants.

"It cannot be that Mr. Lukashenko's blackmail forces us to accept anyone," Morawiecki told journalists.

A group of migrants are being sheltered in a small camp near the Polish village of Usnarz Gorny, which lies next to the Belarusian border.

Polish Interior Minister Maciej Wasik said on Twitter that the "border is sealed" and that the "illegal immigrants" would not be allowed to enter Poland. He said the migrants were "on the Belarusian side" of the border.

The government in Minsk has been accused of flying the migrants to Belarus, and then letting them go to the EU. Many of the migrants originally come from Iraq.

The Lithuanian Foreign Ministry sent an official letter to Belarus on Wednesday in protest.

According to the government in Vilnius, 4,000 unauthorized migrants have entered into Lithuania from Belarus this year.

German Chancellor Angela Merkelhas said Belarus was using refugees to "undermine security." She is expected to meet with Russian President Vladimir Putin on Friday to discuss the issue.

Belarus has previously denied the accusations and claimed European migration policies are to blame for the migrant surge.

Tensions have been high between the EU and Belarus ever since Lukashenko's contentious re-election and mass protests in 2020. More recently, the state-backed hijacking of a Ryanair flight over Belarusian airspace in May was a point of contention. The plane was forced to land in Minsk at the request of Lukashenko, with opposition journalist Raman Pratasevich then being arrested by authorities. Various sanctions on Belarusian officials and firms followed both the election and Pratasevich's arrest.

Belarus has cracked down on domestic dissent and media following presidential elections in August of last year. The voting was widely considered to be rigged in favor of Lukashenko, who won another term in office.