Philipp Lahm on retirement: I asked myself whether I could still do it | Sports| German football and major international sports news | DW | 17.01.2018

Philipp Lahm on retirement: I asked myself whether I could still do it

Former Germany and Bayern Munich captain Philipp Lahm has written about his decision to step away from the game and what lies ahead. In a column for a German newspaper, he said he wanted to exit before his powers waned. 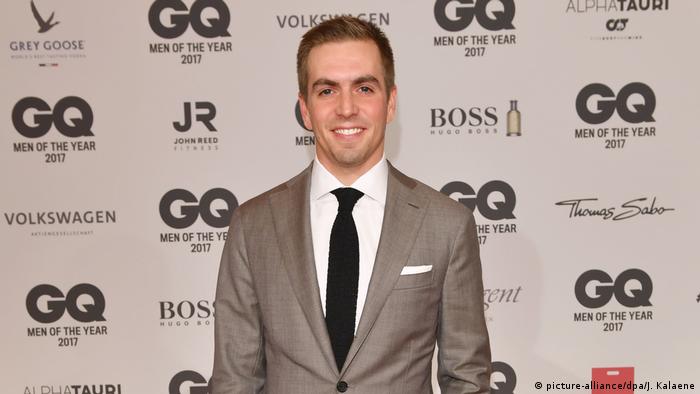 After 517 games for Bayern Munich, 113 for his country, a World Cup title, a Champions League triumph and eight German league titles, it's understandable that the 34-year-old Philipp Lahm is regularly asked why he hung up his boots. In an article for Bild on Wednesday, Lahm attempted to answer that question.

"As it was a very subjective feeling, I appreciate most people couldn't understand that something had changed for me. But I'm sure that had I kept playing, that fine line, one that I had already felt, would have become visible at some point," wrote Lahm, who felt he couldn't keep reaching the standards he set himself.

Once he became captain, he became a mentor and talked with teammates. His greatest reflection was within himself though - and that's where the first seeds of retirement were sown.

"At the start of every season, I always asked myself - am I meeting my own standards? Can I still do it? I didn't want to come to the conclusion that I couldn't during a season."

Unlike many footballers who leave the game, Lahm was not left with a void though. His transition away from the game was aided by his work in business, and of course more time with the family. Perhaps most all though, Lahm just felt the timing.

"When I watch Bayern games today, I'm convinced that my retirement was also the right move for the team. The team could restart and a new hierarchy could be formed."

Bayern have certainly moved on from Lahm and Bastian Schweinsteiger, but perhaps a true new era for the club will only begin once Arjen Robben and Franck Ribery also call time on their careers.

The return of Lahm to Bayern in a non-playing capacity has always seemed likely, and the former right back admits he is considering where and how he can best put his experience to use. First though, like he did in his career, he must be ready.

"Of course I can still imagine working with Bayern Munich again at some point, but those who know me know I like to be prepared."

Lahm will soon be seen as an ambassador for Germany's 2024 European Championship bid, but while his life off the pitch continues to evolve, he remains as humble as ever about what he achieved on it:

"If I had to summarize my career, I hope fans remember me as a good football player - I believe I was, not more, not less."