Pakistan struggles to balance ties between Washington and Beijing | Asia | An in-depth look at news from across the continent | DW | 14.10.2021

Pakistan struggles to balance ties between Washington and Beijing

Pakistan may have its eyes on Beijing, especially with billions of dollars in infrastructure projects in question. But experts warn that instability spilling over from Afghanistan threatens both US and Chinese interests. 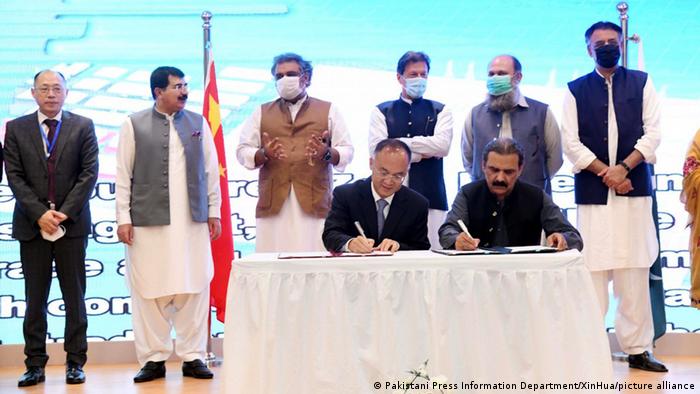 Pakistan-US relations have remained strained since the Taliban takeover of Afghanistan in mid-August.

Over the years, Washington has criticized Islamabad for supporting the Taliban. Since US President Joe Biden came into the White House, he has not engaged with Pakistan's Prime Minister Imran Khan.

Some analysts say Pakistan now has its eyes set on Beijing instead.

Islamabad has repeatedly said it is trying to maintain balanced relations with both the United States and China.

Khan said in June that it is unfair for the United States and Western countries to pressure Pakistan to choose sides and downgrade its relationship with Beijing.

"Whatever will happen, our relationship between the two countries — no matter what pressure is put on us — is not going to change," he said. "We should have good relations with everyone."

The China-Pakistan Economic Corridor (CPEC) is a central part of the Belt and Road Initiative, in which Beijing pledged over $60 billion (€52 billion) for infrastructure projects in the South Asian country, mostly in the form of loans.

Alice Wells, the US assistant secretary of state for South and Central Asia under Donald Trump, called the CPEC initiative an "unstainable and unfair" debt for Pakistan during a visit to Islamabad last year.

Pakistan rejected the US's criticism of CPEC last year. The Chinese embassy in Islamabad at the time stated that "the US is obsessed with the story it [has] made for CPEC."

The deteriorating security situation in Pakistan, however, has prompted concerns about how it could hamper Chinese investment in the country, as well as Islamabad-Beijing relations. China has in the past urged Pakistan to improve security for its projects and personnel against possible Pakistani Taliban attacks.

Elizabeth Threlkeld, director of the South Asia program at the Washington-based think tank the Stimson Center, told DW that Pakistan runs the risk of "spillover instability" from Afghanistan, as cross-border terrorism incidents and attacks are carried out in the Balochistan province and tribal areas.

"Despite Pakistan's longstanding support for the Taliban, the group seems unable or unwilling to contain terrorist groups operating within Afghan borders, including those targeting Pakistan," she said.

Trapped between Washington and Beijing?

Shuja Nawaz, a South Asia analyst at the Atlantic Council in Washington, told DW that Pakistan should maintain ties with both the United States and China, saying it "need not try to swing" between the two.

"China is an important neighbor and friend. The US and Pakistan have long historical ties," Nawaz said.

"Pakistan needs to act in its own interest in reshaping its relations with the United States so it is not dependent on the Americans nor does it have to deceive them about its actions on their behalf," Nawaz added.

Threlkeld said Pakistan "will be hard pressed to maintain positive relations with the US" as "US interest wanes and frustration grows over Pakistan's support for the Taliban."

"While it might be tempting to focus solely on its ties with Beijing, Islamabad knows it must continue to engage with Washington," she said.

"The US, likewise, continues to need Pakistan for counterterrorism support in Afghanistan," she added.

Pakistan in need of 'a deep public debate'

Nawaz said Pakistan would need to engage in dialogue on its foreign policy stance. He says civilian and the military leadership must take a unilateral stance, and avoid short-term foreign policy strategies.

"Pakistan needs a deep public debate on its foreign policy in Parliament and then an articulation of the principles of its foreign policy for the next 10 years," he said. "No zigzags or short-term deals, which have been a recent pattern."

Pakistan "must not exaggerate the value of a telephone call with Biden again and again," Nawaz said. It is "important for the groundwork to be done at lower levels," before Biden and Khan speak with one another, he added.

"More importantly, Islamabad and Rawalpindi [where the Pakistani military headquarters is based] must speak with one voice to Washington, DC," he said.

Is China an 'alternative' for Pakistan?

Threlkeld said US support remained important for Pakistan. Even though China has been a key partner for Pakistan, it "cannot fully replace the US," she says.

Even if China is willing to provide more economic support, "Pakistan would still want to maintain its relationship with Washington, both to avoid being fully dependent on Beijing and to try to stave off potential US sanctions pressure," Threlkeld said.

Nawaz said the US had lost leverage with Pakistan by cutting all aid.

Nevertheless, "Pakistan has received circa $38 billion in remittances alone from its diaspora," Nawaz said. "This has more than compensated for the absence of US aid flows." He added that Pakistan "must not beg for attention or aid."

Pakistan "must manage its economy better to benefit from the remittance windfall," he said, adding that Pakistan's elites are "depriving" the country of the chance to achieve sustainable growth.

"This will gain respect from the world's investors and build confidence in Pakistan as a destination for foreign investment," Nawaz said.