Over 40 people die as Europe shivers in new cold snap

Many deaths have been reported as extreme winter conditions return to Europe. Meteorologists forecast that the latest cold snap is here to stay. 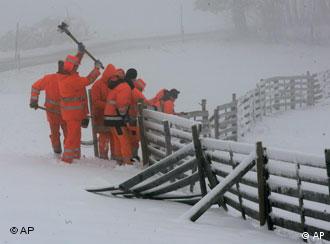 Authorities are working hard to fight the bad weather

Central and eastern Europe is bearing the brunt of a new cold snap as temperatures plummet across the region. Snow has covered much of western Turkey, Bulgaria and Romania, while Poland is again gripped by a deep freeze that has killed more than 200 people since November.

The thermometer showed a record minus 34.4 degrees Celsius (-30 degrees Fahrenheit) in the north-eastern Polish town of Bialystok in the night of Sunday to Monday. Twelve people died in Poland on Sunday alone.

The highest number of casualities was reported in Romania, where 23 people froze to death in the past five days alone. At least 169 people have died from freezing temperatures since early December. Authorities are urging hospitals to provide shelter to an estimated 15,000 homeless people.

The mercury fell to minus 29 in the Bulgarian capital Sofia, where at least three deaths were reported. 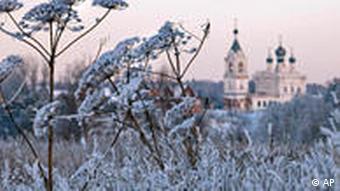 Temperatures fall to minus 25 in and around Moscow

Authorities in Latvia have urged people not to drive unless absolutely necessary as the temperature there fell to minus 27. In Ukraine, schools were closed to protect children from exposure in the city of Kemenchu, where temperatures plummeted to minus 23. In the capital Kiev, people were urged to stay indoors.

It was even colder in Russia, where Moscow shivered at night with temperatures of minus 25. The town of Novisibirk experienced lows of minus 35.

Worse yet to come

Over the weekend, low pressure systems "Ina" in the south of Germany and “Dirk” in the north delivered snowfalls and icy temperatures. Temperatures of minus 10 during the day have been reported in Germany's north-eastern region along the Polish border.

Authorities reported a doubling of traffic queues and numerous accidents on Germany's motorways, especially in the southern state of Bavaria. 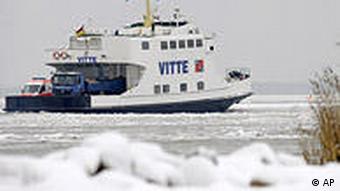 Icebreakers are on duty as ships found themselves stuck in thick sheets of ice in the North Sea and Baltic Sea. Rail schedules were also disrupted with many delays reported.

Around 200 flights were canceled at Frankfurt Airport alone on Monday morning due to ice and snowfalls. Poor visibility also caused delays in planes taking off and landing.

In Germany, officials say 14 homeless people have died due to the cold weather this winter. 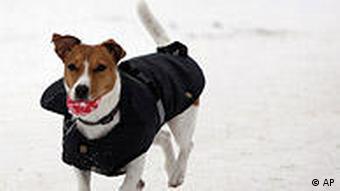 "January will most likely be too cold and quite miserable," said Kirsche. He said average temperatures were down three degrees for this time of year.

On Wednesday, the high pressure system "Eberhard" is due to hit Germany from Poland, bringing heavy snow falls with it and freezing temperatures of minus 20. By Thursday, Eberhard will have reached southern parts of Germany, which can expect snowfalls of 20 to 30 centimeters. The weather is not expected to ease for at least another week.

With Germany in the grip of freezing winter weather, at least ten people are known to have died because of the cold. Experts say that the problem is worse in smaller towns and that more help is needed. (07.01.2010)

After sub-zero temperatures and heavy snowfall led to travel disruption and power blackouts in Germany, the weather situation appears to be easing. The treacherous conditions also led to deaths across Europe. (11.01.2010)

Heavy snowfall in large parts of Germany has prompted many to use salt to melt snow and ice from slippery roads. But experts warn that the excessive use of road salt could cause irreversible damage to the environment. (06.01.2010)

A village in the Erz mountains recorded Germany's coldest temperature of the winter so far. In Berlin, icy scenes prompted revelers to put their skates on — only for police to try to disperse the crowds.