Winter freeze takes toll on Germany′s homeless as 10 perish in cold | Germany | News and in-depth reporting from Berlin and beyond | DW | 07.01.2010

With Germany in the grip of freezing winter weather, at least ten people are known to have died because of the cold. Experts say that the problem is worse in smaller towns and that more help is needed. 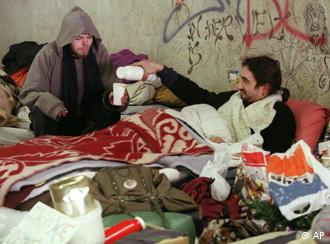 Living on the street is particularly hard in winter

At least 10 homeless people have died in Germany as freezing winter conditions take their toll on the vulnerable.

Those who perished were mostly older men sleeping in the open, under bridges, in doorways, and the remains of demolished houses according to the Federal Association for Aid for the Homeless, BAGW. There are fears that more may have died but have not yet been discovered.

"Unfortunately we have to assume that more homeless people have not survived the cold days," said BAGW chief executive Thomas Specht.

The high proportion of older victims is attributed by the association to general poor health from a lifetime of sleeping rough.

According to the BAGW, most of the victims were found in small and medium sized towns, while in larger cities the situation had been eased by the provision of emergency winter programs.

The group is calling for a national network of high quality, warm shelters to be set up for homeless people throughout Germany. It wants shelters to offer individual rooms, high standards of hygiene and flexible opening times.

There were 227,000 people officially classed as homeless in Germany in 2008, the group said, a reduction of six per cent on the previous year. Around 20,000 of those were living with no form of accommodation at all, a fall of just 1,000 compared with 2007.

Figures reveal a lower proportion of homeless people in eastern Germany, a fact attributed to a greater number of vacant properties in that part of the country.

Winter mayhem has continued to strike much of Europe, with more deaths reported and public transportation around the continent grinding to a halt. (20.12.2009)

More than 2,000 passengers were stuck under the English Channel after sub-zero temperatures caused Eurotunnel trains to break down. Icy weather has thrown travel plans across Europe into chaos and has even claimed lives. (19.12.2009)

Heavy snow and freezing temperatures cause havoc in Europe (08.01.2010)