Outgoing Hollande visits Berlin ahead of transfer of power

On his last official visit, outgoing French President Hollande visited Chancellor Merkel in Berlin, bookending his first official foreign visit. The two have shared some good times and some not so good times. 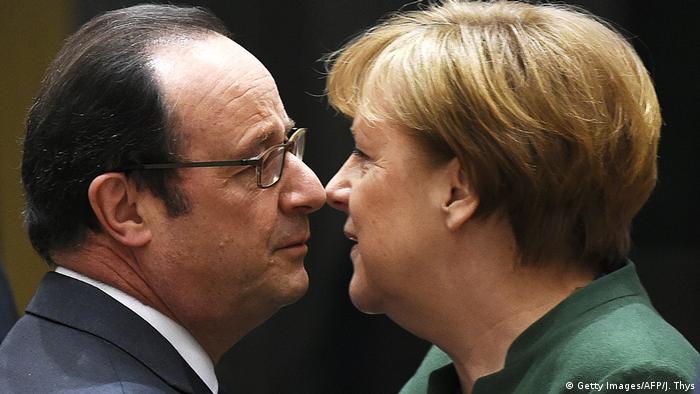 "While we come from very different political families," German Chancellor Angela Merkel said on Monday after Hollande's belated arrival in Berlin, "I have enjoyed working with Francois Hollande."

The French presidential plane was forced to turn back once after it was struck by lightning on its first attempt to leave Paris.

"We have built up mutual trust," she said, over over Hollande's five years in office.

In June 2014, Merkel - a German conservative - and Hollande - a French socialist - brought Russian President Vladimir Putin and Ukraine's leader Petro Poroshenko together for talks on the sidelines of 70th anniversary commemorations for Operation Overlord, the World War II amphibious assault against Nazi-occupied France.

"There was a before and after" that summer's meetings in the Hollande-Merkel relationship, people close to the president told the French news agency AFP.

"Working on a subject that was neither bilateral nor linked to the EU changed the climate of their meetings and the extent to which they were partners, which went on to show itself during the Greece crisis and the migrant crisis," the source said.

One of the best-known images of their partnership came at a darker moment, as Merkel laid her head against Hollande's in a gesture of empathy after terrorist attacks against satirical magazine Charlie Hebdo and a Paris kosher supermarket in 2015. 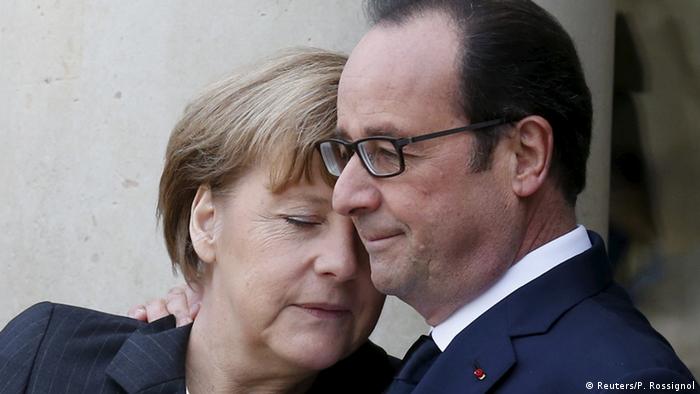 Hollande welcomes Merkel as she arrives at the Elysee Palace after the Charlie Hebdo shootings in Paris on January 11, 2015

A steady course into the next administration

Merkel on Monday praised Emmanuel Macron, the 39-year-old who will be France's next and youngest-ever president, for the "courageous pro-European campaign" he waged successfully against far-right nationalist Marine Le Pen.

"Emmanuel Macron bears the hopes of millions of French - and many people in Germany and all of Europe," Merkel said in Berlin.

On Monday morning, Macron took part in the ceremony to commemorate the victory over Nazi Germany alongside Hollande. On Sunday he will officially take office from Hollande; the incoming president's first journey abroad, like his predecessor's, will be to Germany.

German Foreign Minister Sigmar Gabriel (SPD) said that Germany would have to invest much more strongly than before in Europe and do everything to ensure that Macron is successful.

A special relationship: Merkel and Hollande

French President Francois Hollande announced this week that he will not stand for re-election in the spring. Chancellor Angela Merkel, who will seek a fourth term in office next year, got on with him surprisingly well. (03.12.2016)

French President Francois Hollande has promised a response to the hacking of presidential candidate Emmanuel Macron's campaign emails. Hollande said he was unsure whether it was an attempt to destabilize the Sunday vote. (06.05.2017)