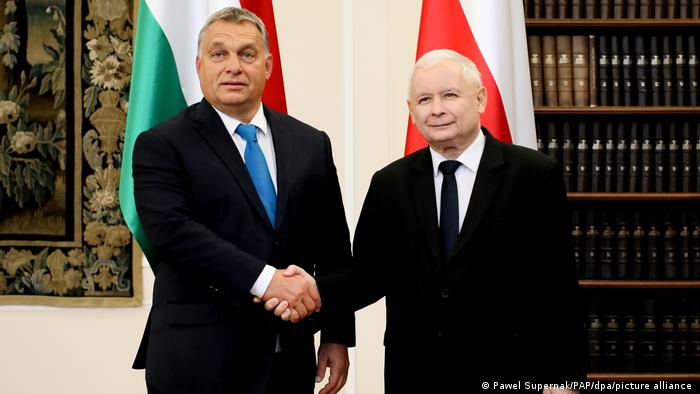 The rhetoric from Warsaw and Budapest has been outrageous. On the one side, there's the Polish government rambling on and on about being "enslaved" by the European Union because it wants to interfere in Polish political matters.

Meanwhile, Hungarian Prime Minister Viktor Orban has been taking things even further, comparing the EU with the Soviet Union for the regulations it wants to impose on his country.

Both have always maintained they detest their communist past — but when it comes to propaganda, they've revived the old tradition.

EU treaties not open to interpretation

Using these outlandish claims, Poland and Hungary have justified their veto of the EU's next seven-year budget and COVID-19 recovery plan over a clause that links future funding to adherence to the rule of law and the observance of democratic rules. Finally — such a regulation was long overdue.

At the same time, Orban — who has always has been slightly ahead of his Polish colleague when it comes to chutzpah — has claimed he is still entitled to payments from Brussels, no matter what happens, or doesn't happen, in Hungary.

And in Warsaw, Brussels is seen as the central bank where Polish politicians can collect the funds they need to attract voters and keep party members in line by directing business their way. As one of the countries to profit most from the EU, Poland has received some €11 billion ($13 billion) in net payments per year over the last budget period. To a somewhat lesser extent, the same has applied to Hungary.

But both countries behave as if these funds came without obligations. It's about time they read the accession treaties they signed when they joined the European Union in 2004, which state that EU members are bound by democratic principles. These treaties are neither vague, nor are they open to interpretation or negotiation. And they clearly include an obligation to uphold the independence of the judiciary and the freedom of the press. Both these values have been undermined in Hungary for years, and Poland has increasingly followed suit.

EU only has itself to blame

This week's veto of the €1.8 trillion budget by Hungary and Poland has catapulted the EU back into crisis mode — and coming to an agreement on the COVID-19 recovery plan was hard enough. But the bloc has itself to blame: it dropped the ball when, for years, it passively watched as first Hungary, then Poland, set up authoritarian structures. The Hungarian media landscape wasn't brought into line overnight. It happened bit by bit; today, Orban is on the verge of shutting down the country's last independent news site and radio station.

The same is true of Hungary's move to dismantle the independent judiciary. Every few months, new legislation was passed that further restricted the freedom of the country's judges until finally the government was in control. In response, Brussels took Hungary to the European Court of Justice, but otherwise remained silent. EU governments shied away from the conflict, too cowardly even to use the feeble Article 7 procedure to suspend some of Hungary's EU rights.

The center-right European People's Party (EPP) in the European Parliament has covered up Orban's power grab for years, and still hasn't managed to ban his nationalist Fidesz party from its ranks. And even thought the EPP has now urged Budapest and Warsaw to change tack, the party's complicity in this disaster should not be forgotten.

Now, at the worst possible time during a worldwide pandemic, Poland and Hungary are taking the 25 other EU member states hostage in their ongoing attempt to crush democracy. This unprecedented incident shows just how far Orban and Jaroslaw Kaczynski, the leader of Poland's ruling right-wing Law and Justice party, have distanced themselves from political partnership in Europe.

The money from the COVID-19 relief fund is urgently needed in southern Europe, but these two governments haven't shied away from their campaign of blackmail to further finance their corrupt power games with EU funds. With partners like that, who needs enemies? The EU urgently needs to draft another clause — one that deals with kicking out member states.

With Donald Trump out, EU nationalists are down a US ally

The nationalist governments of Hungary, Poland and other EU members have lost a kindred spirit with Donald Trump's defeat. Will they have to rethink their strategy? Will that make politics easier for the rest of the EU?

Opinion: Germany's mandatory testing for travelers is only sensible 19h ago