The Russian government has banned screenings of a British comedy about Josef Stalin. In doing so, it incapacitates the Russian people and stifles any possibility of dealing with the past, says DW's Miodrag Soric. 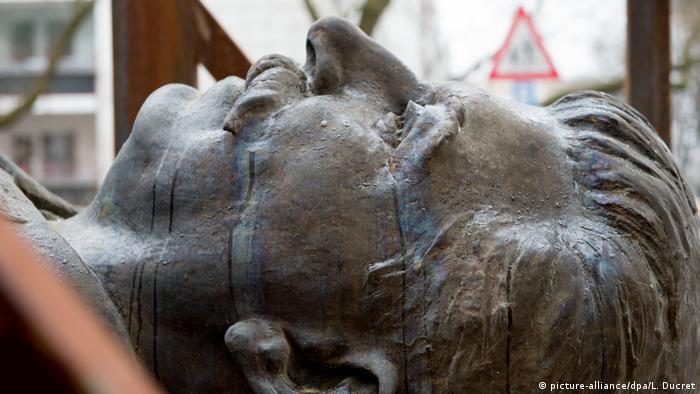 "No, there is no censorship in Russia!" said Russian Minister of Culture Vladimir Medinsky. "No, Moscow is not afraid of critically dealing with its past!" the minister said. Only to forbid screenings of the British comedy "The Death of Stalin" just days before its Russian premiere.

Supposedly the film violates Russian laws. Though only the minister knows which ones. They cannot be any based on the constitution, because it expressly forbids censorship.

The minister of culture revealed that the laws it violated were moral in nature. He and a number of representatives in the Duma, Russia's parliament, seem to find it inappropriate that Russian citizens are being offered a lampooning of Josef Stalin, one of the victors of the Second World War, right before the 75th anniversary of the Battle of Stalingrad.

One of those Duma representatives is communist Yelena Drapeko. She said the film endangered the harmony that Russian society has achieved. Only Stalin put it more eloquently when he announced: "Life's getting better, and happier too."

The question that remains is why? Doesn't the Kremlin trust citizens to form their own opinions? That is nonsense. Russian citizens are just as mature as any in the West. Russian journalists who were afforded a sneak preview of the Stalin comedy laughed just as heartily at the jokes as their colleagues from Britain and elsewhere.

An intact society has no fear of open discussion and debate about its own past. Openly and respectfully voicing differences of opinion are part of democracy — in fact they strengthen it. A democracy that has no room for passionate debate is no democracy.

Those who do not want to see the film should not. It is as simple as that. Forbidding the film will only make it that much more interesting to many young people. After all, it's the forbidden fruits that are sweetest. Prohibited books, too, are generally more interesting that those that are not — people remember that from the days of the Soviet Union.

But unlike in Soviet times, it is impossible to keep people from seeing such contraband in the age of the Internet. Anyone who cares to know more can ask any young Russian which online site they use to see the films they want to.

It's hard to believe that it is up to the Russian government to protect the most brutal of all Soviet dictators. Even Russian President Vladimir Putin called Stalin — a butcher responsible for the deaths of millions of Russians — "a complex figure."

Perhaps a film that raises questions about Stalin's place in history is an imposition on Putin himself, just weeks before Russians are to vote in the country's March presidential elections. He wants to make sure that as many citizens as possible head to the polls. And he does not want them staying away because of a comedy film.

What is the state of the freedom of expression in Russia? And why is it so difficult for the Kremlin to deal with the country's revolutionary past? DW spoke to Russian historian and publicist Irina Sherbakova. (07.11.2017)

Opinion: Joe Biden's Cabinet picks — cause for optimism 15h ago

Opinion: When will India give women the right to bleed? 15h ago