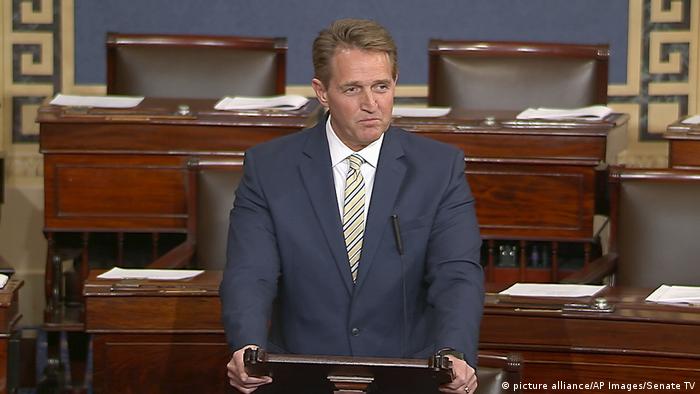 "When a figure in power reflexively calls any press that does not suit him 'fake news,' it is that person who should be the figure of suspicion, not the press," said Flake in a speech on the floor of the US Senate

"Mr. President, it is a testament to the condition of our democracy that our own president uses words infamously spoken by Joseph Stalin to describe his enemies," he said, referring to Trump's use of the phrase "enemy of the people" to describe the press.

Stalin, who ruled the Soviet Union from the mid-1920s to 1953 and was responsible for millions of deaths, regularly used the phrase against his political opponents.

The president's "reflexive slurs," he added, were an affront to the sacrifice of journalists around the world who had died doing their jobs.

The 55-year-old Arizona senator, who has been one of the most vocal Republican critics of Trump, also attacked Trump for inspiring foreign dictators and undermining public faith in objective truth.

"Not only has the past year seen an American president borrow despotic language to refer to the free press, but it seems he has now in turn inspired dictators and authoritarians with his own language," he said.

"Without truth and a principled fidelity to truth and to shared facts, Mr. President, our democracy will not last," he said.

Flake announced in October he would not seek re-election in 2018 after saying he felt out of step with the views of his party.

The speech came ahead of Trump's handing out of "Fake News Awards" to multiple US news organizations.

Last week Trump announced on Twitter his plans to give out the awards to the "most corrupt & biased of the Mainstream Media" on Wednesday, a presidential action Flake said "beggars belief."

@dwnews - With Truly.Media, DW takes the fight to fake news

@dwnews - With Truly.Media, DW takes the fight to fake news

Flake is the second high-profile Republican to publicly criticize Trump's relation with the media after Senator John McCain wrote a commentary piece on Tuesday for The Washington Post titled: "Mr. President, stop attacking the press."

"The phrase 'fake news' — granted legitimacy by an American president — is being used by autocrats to silence reporters, undermine political opponents, stave off media scrutiny and mislead citizens," McCain said.

"Whether Trump knows it or not, these efforts are being closely watched by foreign leaders who are already using his words as cover as they silence and shutter one of the key pillars of democracy."