Peace should not be a word to remember only in times of conflict. Until peacemaking becomes a constant process, the spiral of war and conflict will continue, says DW’s Serdar Vardar. 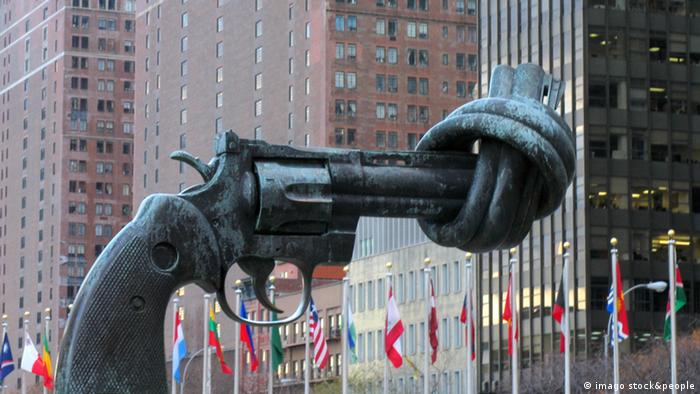 Is it time to for the UN to rethink its strategy for peacekeeping missions?

Let's face it: The United Nations has lost much of its credibility and influence and we cannot let peace and security issues be decided by the five nuclear powers of the UN's Security Council. We must act on the ground level. We must engage people, encourage them to talk to each other. All the time. Something the UN has failed to do.

Why can't we imagine an International Committee of Peace for example? One filled not with diplomats, but with people who dedicate their lives to peace and are chosen by the citizens of each country. Every member state can be responsible for holding elections to choose two (one man, one woman) peace delegates who do not have any political affiliations. People who have proved themselves as respected peacemakers in their countries.

The vicious cycle of frozen conflicts

Such a global and civil organization can transform the gentle tones of peace into a full-scale orchestra. Because real peace is constructed by the people, not brokered strategically as in the recent example of Azerbaijan and Armenia. In 1993, Armenia had a better equipped and trained army than Azerbaijan and took control of the Nagorno-Karabakh, a region internationally recognized as Azeri territory. After three decades of frozen conflict, an oil-rich Azerbaijan had the means to build a better army and took back control of the region. After six weeks of war that killed thousands and displaced 130,000 people, both sides agreed on aceasefire brokered by Russia.

Far from being a peace deal, this has served only to freeze the conflict until one of the sides renews hostilities. This type of vicious cycle must end.

The 'peace-makers' have their own political agenda

Can we really expect superpowers to build peace in third countries? For instance the Russian government has no interest in achieving real peace between Armenia and Azerbaijan. Only a frozen conflict enables Russia to act as the "Big Brother” for both countries, and maintain a military presence in the region.

Other big powers are not innocent either. France recently said it would continue selling French arms regardless of a country's human rights record. The same week the US Senate backed the sale of F-35 fighter jets to the United Arab Emirates, a country that bombed a refugee center in Libya and is accused of committing war crimes in Yemen.

How can we expect these countries to bring peace when they are the ones selling guns to each side in the first place? If they see a national interest they interfere, if they have little to gain they look elsewhere. Just look at what happened with the Tutsis in Rwanda, the Darfur people in Sudan, or the Bosnians in the middle of Europe.

An International Peace Committee chosen by the people

I think the time has come to end the reliance on the bureaucratic and limited approach of the UN and the Security Council powers.

A civic International Committee of Peace can empower local peace initiatives and would not muddy the peace process with hidden strategic agendas. The only aim would be to develop consistent peace-keeping initiatives even in times of peace.

I know there are counter-arguments of why such a concept may be dismissed as pie in the sky, but we must try and come up with new ideas and frameworks. Ones that provide opportunities to civil peace-makers from all around the world. Because one thing is clear: peace is too important to leave to self-serving, opportunist political powers.

French President Emmanuel Macron says French arms sales to Egypt would go ahead despite its poor human rights record. At a meeting with that country's president, he said Egypt's fight against terrorism was paramount.

Austrian ex-Chancellor Kurz to withdraw from politics 0m ago

COVID: Germany set to approve curbs on unvaccinated 33m ago

Newly discovered dinosaur had 'blades' on tail 2h ago