UN peacekeepers: Numbers are going down | World | Breaking news and perspectives from around the globe | DW | 28.05.2020

UN peacekeepers: Numbers are going down

World powers are becoming increasingly reluctant to commit their forces to UN peacekeeping missions. As a result, others are stepping into the breach. 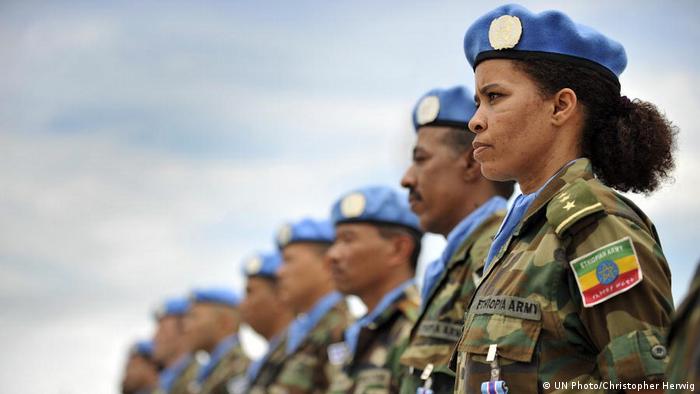 Make peace between Israelis and the Arabs, solve the conflict between India and Pakistan — such were the visions that were shared by many at the United Nations back in 1948. UN missions, they believed, could and would bring peace to the world's conflict zones.

It was in 1948, when the United Nations Truce Supervision Organization (UNTSO) started monitoring the ceasefire between Israel and its Arab neighbors, that the history of the blue helmet peacekeeping missions began – a history that has featured both successful missions and setbacks.

One year later and UNMOGIP, the United Nations Military Observer Group in India and Pakistan began its work mediating in the Kashmir dispute. The total number of missions with often cumbersome acronyms has in the meantime risen to 72. UNTSO und UNMOGIP are still ongoing, but neither of these UN missions has brought lasting peace.

Nearly 90,000 soldiers and police officers are currently taking part in UN peacekeeping deployments. That is a drop of around twenty thousand since 2015.

"Some members of the UN Security Council have the feeling that UN missions are too expensive and achieve too little," says Jaïr van der Lijn, a senior researcher at SIPRI, the Stockholm International Peace Research Institute, "which is why they want to reduce the budget for peacekeeping missions, with the Trump administration leading the way.”

Nearly 4,000 blue helmets have been killed during peacekeeping missions

When the Cold War came to an abrupt end three decades ago, the global powers, to an extent at least, subscribed to multilateralism. Between 1989 and 1994 the Security Council gave the go-ahead for 20 new peacekeeping deployments. The number of blue helmets went up sevenfold. And in 1988 the Nobel Peace Prize was awarded collectively to the UN Peacekeeping Forces. But the UN failed to deliver on the high expectations. Yugoslavia, Ruanda, and Somalia all became synonyms for failed UN missions.

Treading on each other's toes

Themassacre in Srebrenica, the genocide of the Tutsis, the carnage in Mogadishu: in each instance the UN was helpless. The peacekeepers were on hand, but there was no peace.

From the mid-1990s, more and more regional alliances, including NATO,  began to see it as their responsibility to bring about peace. It is a trend that continues today, SIPRI's van der Lijn tells DW: "While there has been a steep decrease in the number taking part in peacekeeping missions, the numbers deployed in non-peacekeeping missions has actually risen – above all inanti-terror operations."

One example cited by van der Lijn is the Multinational Joint Task Force (MNJTF) operating in the Sahel region and combining, among others, forces from Chad, Niger and Nigeria to combat the Boko Haram Jihadist insurgency.

With so many regional actors getting involved, it is becoming increasingly difficult to maintain an overview of who is doing what. This is the case inMali, where a UN mission called MINUSMA is tasked with monitoring a fragile peace accord and, at the same time, guaranteeing the security of the civilian population. Meanwhile, there is also an EU mission supporting the Malian police and another training the Malian military. A French military mission is combatting Islamist groups, partly with international backing. And then there is the G5 Sahel Joint Force – a partnership of five Sahel states trying to bring security to the region.

Read more: COVID-19: A threat to peace efforts in Africa

"They just do their own thing"

It is the same situation in Somalia, the Central African Republic, or Afghanistan says van der Lijn: "The international community has created a highly-complex constellation of the most varied organizations that are all launching their own operations. They really struggle to cooperate. They double up or tread on each other's toes. And sometimes they just do their own thing without any real coordination. Since the 1990s the UN has learned a lot and is much better placed to take on difficult missions."

And it remains the case that 70 percent of all peacekeeping deployments in Africa are stationed south of the Sahara. However, some larger missions in this region have recently been discontinued while new UN missions have begun operations in Libya and Yemen.

The majority of the blue helmets currently come from sub-Saharan countries or from Southeast Asia.

"African states mainly dispatch troops in their own neighborhood," says van der Lijn. " For example, Ethiopia nearly only sends troops to  Somalia and Sudan. The aim is clearly to protect their own national security. And Mali's neighbors only contribute to MINUSMA clearly in the hope of ensuring that the problems there remain Mali's problems and don't put their own stability at risk."

The US is the only western country to put forward a sizeable contingent – mainly deployed in Resolute Support Mission (RSM) in Afghanistan. But US President Donald Trump is determined to further reduce troop numbers.

Countries supplying peacekeeping troops are paid just under 1,600 US dollars per month per soldier. No surprise therefore that it is above all poorer nations that provide troop contingents.