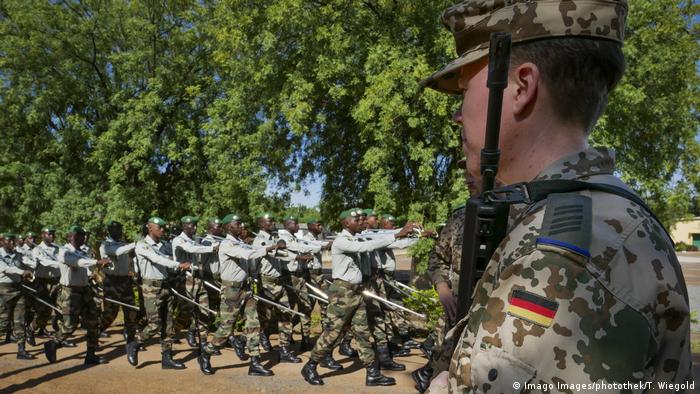 On Thursday Germany's Parliament, the Bundestag, debated mandates governing the deployment of its troops in the Sahel, a vast swath of land stretching across the southern edge of the Sahara desert.

The German Bundeswehr is currently involved in two missions in the Sahel: the European Union's training mission (EUTM) and the UN's MINUSMA peacekeeping mission, both based in Mali.

The German government has proposed extending the two mandates by one year, to May 2021, as well as expanding the Bundeswehr's participation in the EU's training mission.

Angela Merkel's Cabinet has already signaled that it backs the time extension, but there is disagreement about how the Bundeswehr should expand its field of operations.

After Thursday's debates, the Bundestag referred motions presented by the country's various political parties to committees for further consultation.

"The Sahel region is key to the development of West and North Africa. Failure to stop terrorism and advance the economic development of countries in the region will result in significant upheavals in the region if the governments there fail to work together," Jürgen Hardt, the parliamentary spokesman on foreign policy for the Christian Democratic Union (CDU), Merkel's conservative party, told DW in an interview.

Germany is concerned that the region could become a retreat zone for globally operating terrorist groups. Additionally, if states collapse and poverty continues to grow, it could drive more migration from the region to to Europe.

In an effort to help hinder such eventualities, the German government wants expand the number of Bundeswehr soldiers from 350 to 450.

In addition, it has proposed permitting German troops to accompany their Malian colleagues across the country, rather than limiting their operations to the relatively safety of southern Mali.

Although German troops still won't be able to take part in combat operations, such a deployment would likely be more dangerous, as attacks on armed forces are common in many parts of Mali.

The German government also has suggested expanding the advisory role that German troops play in Mali to include the other Sahel states of Burkina Faso, Mauritania, Niger and Chad.

"The borders between these countries are no obstacle to terrorism. Simply concentrating on one country makes no sense," Hardt said.

At the same time, CDU parliamentarians are also calling for more aid for the civilian population.

"In addition to the commitment of the Bundeswehr of training police and military forces, development and economic policy engagement is also very crucial," Hardt said.

From the CDU's perspective, Germany's support should take local needs into account.

Matthias Basedau, director of the GIGA Institute for African Studies in Hamburg, agrees it's important to tailor such missions to local needs, but at the same time warns about the limits of military cooperations.

"It is important to recognize that problems on the ground can only be solved by governments and the local population," Besedau said. "So far, the experience of training security forces in the Sahel has been sobering. It has proved difficult to actually implement sensible measures if governments on the ground aren't fully involved."

Some of the Germany's political opposition are critical of expaning the Bundeswehr's training mission to other Sahel countries. 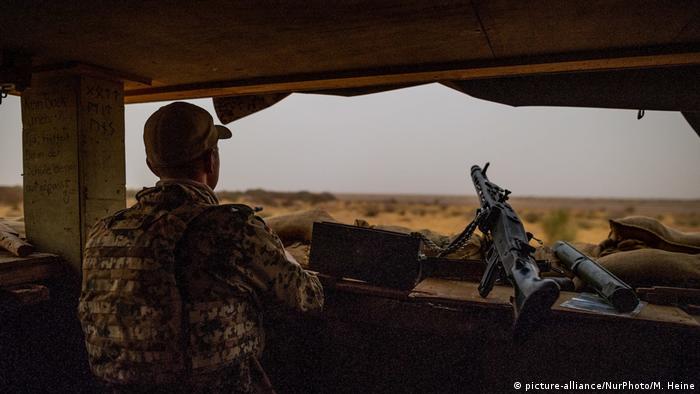 Military bases in the Sahel, like this one in Gao, Mali, are repeatedly targets of attacks

"Training missions aim to train the army in fragile democratic states in order to stabilize democracy," said Frithjof Schmidt, a parliamentarian and foreign policy expert for the left-leaning Green party.

"If you want to expand that, you suddenly find yourself dealing with authoritarian governments and a dictatorship like in the Chad. I think that is a serious mistake," Schmidt told DW.

Defense Minister Annegret Kramp-Karrenbauer, a member of the Merkel's CDU, had initially pushed for a more robust military deployment, suggesting that German troops should take part in French-led combat operations against extremist groups.

This would have exposed German forces to new dangers, which would have been extremely unpopular with the German public. The idea appears to have been shelved for now.

"The federal government has so far only distinguished itself through half-hearted commitment," Hoffmann told DW.

He said the region desperately needs investment and jobs, but German companies will only invest "if the conditions are right." The federal government therefore needs to improve risk coverage for German investments on the ground, he said.

The annual US-led military exercise Flintlock is underway in Mauritania amid concerns that the US will draw down its military in Africa. In response, France and Germany are pushing for greater EU involvement. (28.02.2020)

The White House said its new envoy J. Peter Pham will "maximize US diplomatic efforts in support of security and stability" in the Sahel. The new envoy comes at a moment when the US army is retreating from the continent. (09.03.2020)