The German chancellor came to the White House empty-handed. His reassurances about Germany’s commitment to Ukraine will have done little to convince his critics in Washington, says DW's Michaela Küfner. 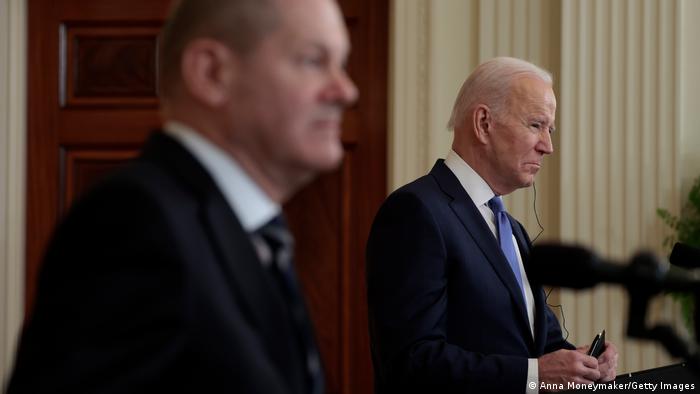 "I promise you, we will be able to do that." Those were US President Joe Biden's words at the joint press conference with German Chancellor Olaf Scholz at the White House on Monday.

Biden was referring to putting an end to the Nord Stream 2 gas pipeline project if Russia invades Ukraine again. His message was indicative of the confidence a global power has in its partner to do the right thing. Flipping the off switch would be Germany's task, given that it's under German control.

Scholz didn't contradict Biden — but that was about all. At every step of the way, Scholz has avoided addressing the issue directly. Instead, he repeated the same non-committal statements the public has become accustomed to after his first 62 days in office.

In the event of a Russian invasion of Ukraine, he says "everything is on the table." And that the costs for Russia would be "very high." His efforts to elaborate on his threat that "much more could happen" than Russia realizes, stop short of spelling out what that would mean in concrete terms. 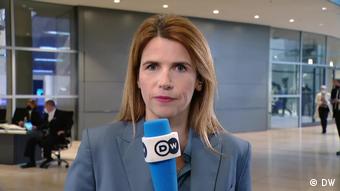 Scholz had hoped to use the trip to leave behind the hashtag that has been trending in Germany, #woistScholz (where is Scholz?).

For weeks, he's been off the radar. But instead of stepping up to the plate as the "Leader of Europe," the person you call if you want to talk to Europe, his performance at the press conference did little to inspire fresh confidence.

Prior to his arrival, the main question making the rounds in Washington had been: "Can Scholz be relied upon?"

That prompted Biden to nip those doubts in the bud and reiterate that he had "no doubt" about how "absolutely reliable" Germany and Scholz were. But was that enough to assuage US criticism of the chancellor? Hardly.

His Washington audience did not get what they had come for, not even when he spoke in English. No sweeping statement that shows Germany's commitment, nothing like: "Germany will guarantee the values we share with America in Europe."

Granted, we know he's not big on pathos. Still, a small gift to his host would have gone a long way towards deflecting some of the criticism.

For weeks, the think tanks in Washington have missed no opportunity to pour scorn on the German government for chickening out, as they see it, when the going gets tough. While the US and others provide Ukraine with weapons, Berlin delivered helmets and military hospitals instead.

Scholz — like a majority of Germans — wants to secure peace in Europe through diplomacy. Germany sees this as a lesson from its dark past. The US, however, is not fully alien to "establishing" peace, if need be, with military means. Germany's announcement that it is transferring 350 more soldiers to the NATO alliance in Lithuania is a big step in from the German perspective.

In a nutshell, Scholz speaks a diplomatic language that Americans find hard to understand, especially those in Congress. They're breathing down Biden's neck too. For his part, Scholz has to contend with the specter of one of his predecessors, Gerhard Schröder, a fellow Social Democrat, who is about to be elected to the supervisory board of Russia's state-owned gas supplier Gazprom, and who got the Nord Stream pipeline projects 1 and 2 off the ground in the first place.

What's more, even as Scholz and Biden were speaking in Washington, French President Emmanuel Macron and his Russian counterpart, Vladimir Putin, were appearing before the cameras in Moscow. Putin announced that he will talk to Macron again on the phone in the next few days.

Scholz in Washington, Macron in Moscow for Ukraine talks

What would a 'Marshall plan' for Ukraine entail? 6m ago

Opinion: Climate justice must be more than a promise 10h ago