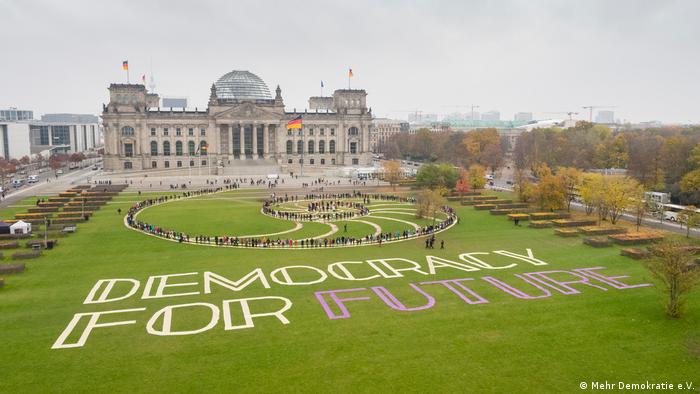 There are many good reasons why we should be worried about the culture of democracy — in Germany, in Europe, across the world. The images of thestorming of the US Capitol in Washington by a crazed mob have burned themselves into the global memory. They also reinforced already existing doubts as to whether democracy in the US is still weatherproof or will disintegrate during the next storm.

This does not seem to be an exaggeration at all, because almost half of the American people once again cast their vote for incumbent Donald Trump during thepresidential election in November — despite or because of a four-year term in office characterized by lies, hatred and racism. Boris Johnson in the UK and Viktor Orban in Hungary haven't quite reached that level. Like Trump, however, those populists are not exactly shining examples when it comes to policies based on fairness and respect.

Trump would not stand a chance in Germany

There are many more who must be mentioned in this context, including Brazil's President Jair Bolsonaro, and presidents Wladimir Putin and Recep Tayyip Erdogan of Russia and Turkey respectively. In short, around the globe democracy is under considerable pressure. In the face of conditions in other countries, Germany almost seems like a paradise and an island of the blissful. Here, a nefarious head of government in the Donald Trump tradition is not even imaginable in theory, including after the general election in September.

Nevertheless, Germany has to reflect on how to improve ties within a society that is increasingly drifting apart. Since the refugee crisis of 2015, at the latest, the country is deeply divided. The political manifestation of this divide is the transformation and strengthening of the right-wing populist Alternative for Germany (AfD), a party that was only founded in 2013.

The AfD's radicalization has many roots

First and foremost, the AfD itself is responsible for mutating, at breakneck speed, from a party that was skeptical of Europe to one that is populist, increasingly radical and sometimes even extreme. Even so, other political forces and parts of the media failed to establish a reasonable dialogue with the new opposition at a time when this would still have been possible.

Having said that, the AfD is only the most visible symptom in a society in which communication is increasingly taking place in parallel universes: Twitter bubbles and YouTube channels in which people remain among peers instead of cultivating an open exchange of opinions and dealing with opposite points of view. There's no room for differing thoughts, there's no willingness for compromise. In the long run, this afflicts damage to any democracy.

Civic councils can widen the view

Therefore, every attempt at making people engage with one another more frequently and in a more constructive manner must be welcomed. Such attempts can counteract the impression even of well-meaning people of being ignored by the day-to-day political agenda. A good example is the so-called civic council, in which 160 randomly selected people (ten from each German state) jointly develop ideas. When this format premiered under the auspices of Wolfgang Schäuble, the president of Germany's parliament, in 2019, nothing less than democracy was at stake.

The second round, which has just started, is dealing with the role of Germany in the world. A broad area, certainly, and any recommendations submitted by the civic council to political actors will remain non-binding. After all, this panel is not a replacement for parliament. Therefore, it could be dismissed as an ineffective pastime for people interested in social policy. Alternatively, it could be seen as a self-deprecating concession by parliament and government: "We've understood the message."

The fact that the AfD reaches approval ratings of 10% across Germany in current polls should neither be a reason for fear nor for reassurance. Rather than that, the incentive should be to win back the 10% of the population for participation in democratic discourse. In that case, the AfD would even have the chance of being taken seriously in a positive sense. And the Federal Office for the Protection of the Constitution (Germany's domestic intelligence service), which is increasingly setting its sights on the party, would be able to get rid of another problem. For this to happen, however, openness to dialogue on all sides will be necessary.

The basis for this dialogue is — and remains — the German constitution. Important pillars of the Basic Law are Article 1 ("Human dignity shall be inviolable") and Article 5, which guarantees freedom of opinion. Both sections are key elements of a stable democracy. The overwhelming majority of the people who live in Germany supports the country's free and democratic system of government. To make sure it stays that way — and in order to reduce the number of those who despise democracy — a lot of goodwill is necessary, and also good ideas, like the civic council.

It would be good to see more of the same.

US militias want to 'blow up' Capitol, police chief warns 2h ago