With Ukraine and Georgia seeking membership, NATO will have to choose whether to support the countries or yield to Russia and suffer a crushing political defeat, DW's Konstantin Eggert writes. 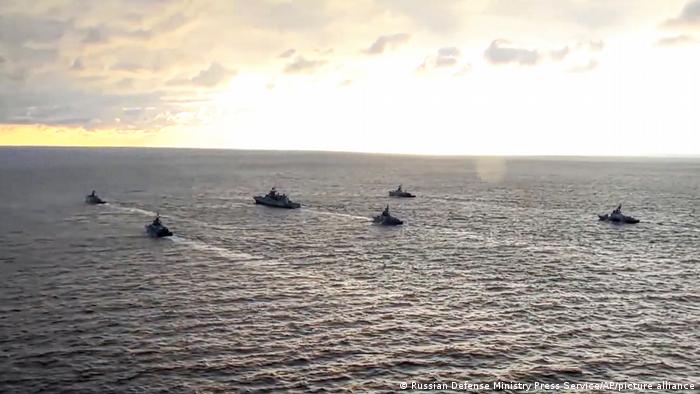 Vladimir Putin will attack Ukraine not from land, but from the Black Sea, blocking or seizing its ports and creating a land corridor to connect Crimea with Russia. NATO will condemn the Kremlin's actions, but will not intervene. After all, Ukraine is not a member of the alliance and is not covered by the guarantees of Article 5 of the North Atlantic Treaty, which assures the members of their collective defense. This is the gist of a recent Bloomberg Opinion column by retired US Admiral James Stavridis, NATO's former supreme allied commander in Europe.

The leaders of the so-called Bucharest Nine bloc of "eastern flank" NATO members might have discussed a similar scenario when they gathered for a virtual summit this week with Secretary General Jens Stoltenberg and US President Joe Biden. After Putin's military "exercises" near the borders of Ukraine in April, no development, however fanciful at first glance, should be discounted. Officials in Ukraine say a massive number of troops remain deployed with military hardware in the country's immediate vicinity, although Russia's "combat readiness" exercises near the borders are officially over.

Created in 2014 at the initiative of Romania and Poland in the wake of Putin's annexation of Crimea, the Bucharest Nine bloc's other members are Latvia, Lithuania, Estonia, Czech Republic, Slovakia, Hungary and Bulgaria. Although Hungary and Bulgaria are known to have softer positions vis-a-vis Putin's Russia than the others, the group as whole always advocates a maximum pressure approach toward the Kremlin.

Some allies, such as Germany and France, consider the bloc hawkish and tend to be more restrained in their own approaches to Russia. The Kremlin's war games in April, combined with reports that Russia had engaged in sabotage in the Czech Republic, finally gave the Central European and Baltic states their "we told you so moment."

Judging by Biden's participation, the Bucharest Nine has the attention of NATO's keystone member: the US. On a recent visit to Kyiv, Secretary of State Antony Blinken promised more US weapons deliveries to Ukraine and hinted at the possibility of granting the country global partner status, which only trusted allies such as South Korea, Australia and Jordan possess. If Ukraine gets such an "upgrade," Georgia would probably follow suit soon.

Putin is bound to pay attention. He is firmly convinced that no other former part of the Soviet Union should ever dream of joining NATO. This is his "red line" — made even redder by the personal prestige he associates with rebuilding the Soviet superpower status and the positive PR effect his flexing the military muscles has on the so-called Putin majority at home. After Putin held a sham plebiscite last year that could allow him to rule Russia until 2036, NATO must look at the 15-year horizon in dealing with Moscow's geostrategic ambitions. Though the Black Sea is regularly mentioned as a priority region, it is not evident that the alliance has a strategy there. The simple fact is that Ukraine (and Georgia) will not stop knocking at NATO's door.

Ukraine's military has gained experience in seven years of confrontation with Russian forces. With access to US weapons, they are much better armed and trained. The officers regularly study in NATO countries. Civilian political control over the military is broadly consistent with NATO standards. The often-mentioned requirement for a candidate country not to have territorial disputes with neighbors is widely accepted as important but is not formalized by the alliance's foundational document: the 1949 Washington treaty.

As the Soviet Union quickly recedes in historical memory, Ukraine's political and military elite is bound to become more insistent that joining NATO is the only real guarantee of the country's security. With the 2008 NATO Bucharest Summit promising future membership to the Ukrainians and Georgians it will become increasingly difficult for the allies to continue placating Russia while keeping the eventual allies in the anteroom.

Flaunting his unpredictability, Putin is quite capable of deciding on a "preemptive strike" against Ukraine. Given the powerful growth in the combat effectiveness of Ukrainian armed forces, this would probably mean a major war in the Black Sea region on a scale incomparable to the 2014-2015 conflict.

Such a war would hit global markets and bring an end to the precarious stability on NATO's southern flank. Should Ukraine be defeated — a distinct possibility, given the disparity in forces — the Kremlin would become the dominant Black Sea power. Moreover, after so many years of cooperation with Kyiv, this would be NATO's defeat too. Most importantly, it would split and fatally weaken the alliance, where the Bucharest Nine have been sounding the alarm for several years as other allies pretend that this concerns them only partially. Such an outcome would be Putin's greatest victory.

'Everyone in Mariupol has a suitcase packed'

Opinion: Fundamental rights are not vaccination privileges 20h ago