France is selling two warships to Russia, while Germany is canceling a planned military export deal - even though the EU sanction deal would still allow it. The EU risks renewed division, fears DW's Christoph Hasselbach. 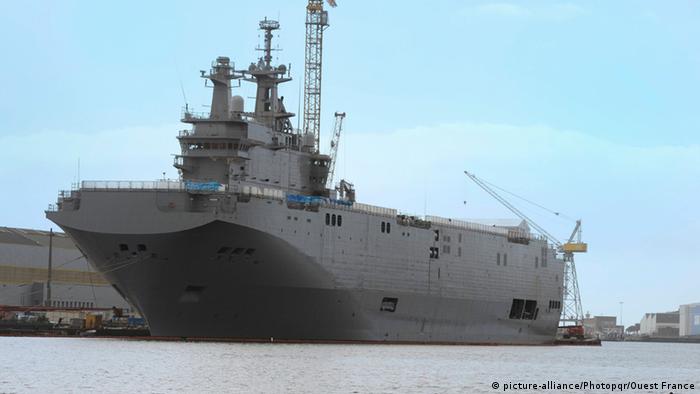 The difference in the message conveyed couldn't possibly be greater: France is going ahead with its warship sale to Russia, while Germany is putting on the brake. This follows last week's EU-wide agreement on new sanctions on Russia - taken in spite of resistance by German exporters, British banks and France, whose state-owned shipyard is planning to supply Russia with two assault ships capable of carrying numerous helicopters. The newly established sanctions are not stopping France, whose president, Francois Hollande, negotiated that they only apply to new business deals, not existing contracts.

Technically, the planned export of a military exercise field simulator to Russia by German defense and automotive technology company Rheinmetall is also unaffected by the sanctions - the contract was signed years ago. Nevertheless, the German government has canceled the deal, which is worth around 100 million euros ($134 million). It will probably now be confronted with claims for damages from Rheinmetall, but it is prepared to accept them - at the taxpayer's expense.

Everything comes at a cost

In any case, the situation has its victims. Sanctions can also hurt those who impose them. Nevertheless, these are worth it. Europeans can only make an impression on Putin if they can show they're ready to pay a price themselves. But does this mean that the Germans are now setting a shining example and the French are being egoistic? It's not all that simple.

Russia could use the warships for attacks or for exerting pressure, but not the combat simulator. So far, the various conservative German governments haven't had any objections towards armament deals with Russia. Sales by Rheinmetall were permitted just three years after the war between Russia and Georgia. Many consider this war, which saw Russia occupy the Georgian territories of Abkhazia and South Ossetia, as a type of practice run for the annexation of Crimea. 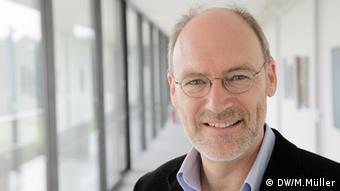 At that time, Germany was ruled by the coalition between the Christian Democratic Union (CDU) and the Free Democratic Party - and today it's a grand coalition between the CDU and Social Democratic Party. It was German Economy Minister Sigmar Gabriel, a Social Democrat, who revoked the newest Rheinmetall trade permit, but the Christian Democrats are not objecting. German politicians may have realized quite late what threat Putin's politics spell for Europe. But at least they have recognized that now, and they are striving to deliver appropriate consequences.

Lack of unity can be exploited

In France's defense, it can be said that the two warships it's selling are worth around 10 times as much as the combat simulator. Canceling the deal could cause serious problems for the French shipyard, but Rheinmetall can easily handle its business loss and will possibly even receive compensation. What's more, Hollande finds himself in a difficult political situation at home and can't afford any more economic mishaps.

However, despite all rational understanding of the reasons for the two different standpoints, the fact that Europe isn't sending a clear message to Russia is a huge downfall. It was hard enough for the EU to agree on the sanctions at all, and now new cracks are appearing in the picture. While some are ignoring the sanctions, some are going along with the plan.

Russian President Vladimir Putin will take advantage of the situation and try to pitch different European countries against each other, as he has until now. At a time when Europeans have finally learned that their freedom has a price, they cannot afford to let themselves be divided.

The US and EU appear set to impose new sanctions targeting Russia's financial, defense and energy sectors in response to the unrest in Ukraine. Negotiations will continue in Brussels on Tuesday. (29.07.2014)