Hundreds of Muslims have spoken out against terrorism in a Cologne demonstration. DW's Shamil Shams believes while it is a good step, Muslims living in the West need to do a lot more to cast off the "extremist image." 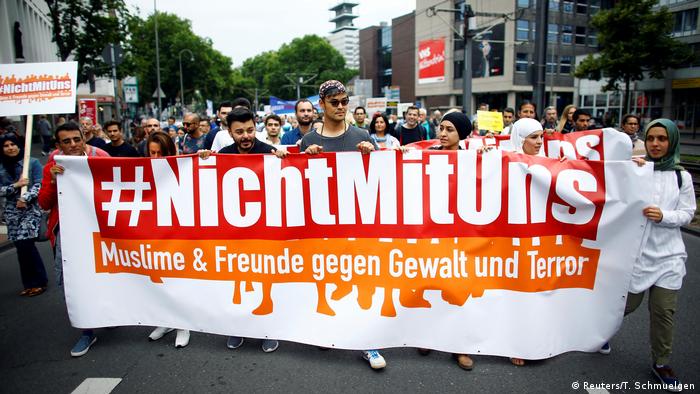 Despite the fact that the turnout in the Muslims against terrorism rally in the German city of Cologne was not as big as expected, it is still a positive sign that people belonging to the Islamic faith went out on the streets and demonstrated that they are as much against the rise of extremism as other European citizens. After all, it is an issue that concerns all Europeans, and Muslims are part of the multi-ethnic European ethos.

The biggest Islamic association in Germany, the Turkish-Islamic Union, boycotted the Saturday rally, saying the "Not With Us" demonstration signals that it is only up to Muslims to tackle international terrorism.

Their argument is deceptive and flawed. It is mostly up to the Muslim community to marginalize radical elements within their ranks, reform their places of worship and promote a moderate version of Islam. But it takes more than a few demonstrations and statements by Islamic organizations in the West to confront Islamism and Islamists.

The recent terrorist attacks in the UK, and a number of deadly assaults claimed by militant Islamic groups and individuals in Germany in the past few years, point to an alarming level of radicalization among the Muslim communities living in Europe. Despite that, Muslim scholars and opinion-makers blame the rise of Islamist extremism on the Western governments' foreign policies, their interventions in the Middle East and other Muslim-majority regions. In this way, they attempt to exonerate themselves from any responsibility for the atrocities that have terrified Europe and the rest of the world.

European Muslims will always be in conflict with Western norms and values if they continue to shift blame on others and don't look inwards. The Turkish-Islamic Union's refusal to participate in the Cologne demonstration is yet another proof that many Muslims are simply not interested in self-introspection.

It is true that a majority of Muslims are peace-loving people, but the terrorists that have massacred people in Britain, Germany, France and Belgium belong to Muslim groups. It is not enough to say that militant organizations like "Islamic State," al Qaeda and the Taliban have nothing to do with Islam or that they do not represent Muslims. Muslims need to explain why these fundamentalist groups do not represent them and how their views differ. What is the alternative, and where is it visible?

While many Muslims blame media for their "negative" portrayal, the fact remains that the killings of non-Muslims in Syria, the brutal murders of atheist bloggers in Bangladesh, and the horrific lynching of alleged blasphemers by angry mobs in Pakistan are not "positive" examples. In today's interconnected world, the Muslim nations can't hide these incidents. Unfortunately, the "negative image" is more internal than external.

Alignment with the modern world

In an age when images are sometimes more important than reality, it is imperative for Muslims to come forward and present a version of Islam that is compatible with modern values.

The battle for enlightenment within Islam has been ongoing for centuries, but now it has become even more crucial than before. It is pivotal for Muslim societies to open up, embrace modern sciences and cultivate a tolerant culture for its artists, writers and thinkers.

The Cologne demonstration is praiseworthy, but what it is crucial is that Muslims living in the West prove through their actions that they are not against gay rights, that they believe in gender equality, and that they are tolerant towards ex-Muslims who are critical of Islamic scriptures. Don't expect others not to criticize you if you don't believe in fundamental human rights like the freedom of speech.

All this will be impossible to achieve if Muslims continue to believe they are "victims." The victim narrative created "otherness" and is an impediment in their proper integration in Western societies. It has result in the "ghettoization" of the Muslim communities in the West. Muslims must also not label every secular state policy as Islamophobic because it gives the impression that they are reluctant to follow the Western law.

Last but not least, Muslims are as much a victim of Western interventions and wars as people in other parts of the world. The US bombed Japan during the World War II but today Japan is allied with the West and is a leading economic power.

European Muslims have the right to disagree with the Western governments' domestic and foreign policies, but they should do it in a way that doesn't feed into the narrative of political Islam, which thrives on the enemy discourse. The West as a whole is not their enemy and they have to accept it. After all, no where in the Muslim world can people practice their religion as freely as they do in the West.