Police have come under scrutiny for failing to stop a known extremist who appeared on TV and went on to commit a deadly attack in the UK capital. London Mayor Sadiq Khan urged police to "answer the legitimate questions." 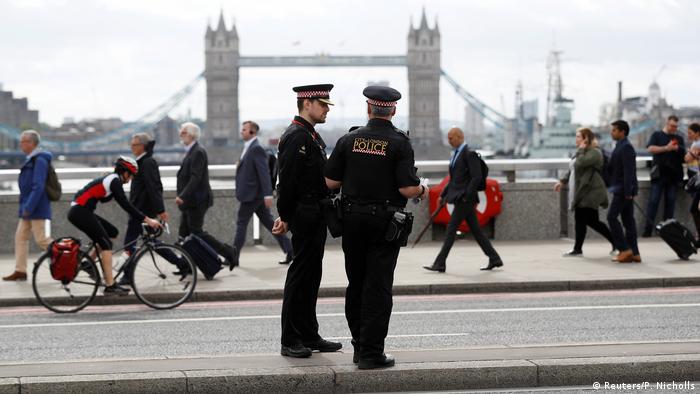 Political leaders on Tuesday continued to question why authorities failed to apprehend Khuram B., one of the suspects in Saturday's attack, after police announced he was known to security services and MI5, Britain's domestic spy agency.

"Not unreasonably, these questions are being asked. I'm sure the police will look into what they knew, what they could have done, what they did do and if anything could have been done differently," London Mayor Sadiq Khan told BBC.

Authorities did not say how Khuram B., a British citizen born in Pakistan, had come to the attention of law enforcement agents, but local media reported that in 2016, Butt appeared in a Channel 4 documentary about British extremists entitled "The Jihadis Next Door."

Read more: British people 'will not want to carry on as before'

"What we need to do is make sure that we ask these questions and the police and the security services respond and answer the legitimate questions we all have," Khan added.

London police on Monday identified the suspected attackers as 27-year-old Khuram B. and Rachid R., who claimed both Libyan and Moroccan nationality. Rachid R. was reportedly 30 years old, but he also went by the name Rachid E., whose age was listed as 25.

Police said although Khuram B. had been known by police, "there was no intelligence to suggest that this attack was being planned and the investigation had been prioritized accordingly."

"I would urge anyone with information about these men, their movements in the days and hours before the attack and the places they frequented to come forward," national counter-terrorism police chief Mark Rowley said in a statement.

Police on Tuesday identified the third suspect as Youssef Z., an Italian national of Moroccan descent. Italian authorities prevented him from boarding a plane to Turkey in March 2016, saying he planned to travel to Syria and join a militant group there, according to Italian daily Corriere della Sera.

The terrorist attack in central London on Saturday left seven people dead and dozens more wounded, with 36 people still being treated in hospitals as of Tuesday.

Read more: In Britain, tolerance and the 'acceptance' of extremism

Twelve of the people arrested as part of police investigations have been released wtihout charge, police added.

"At any one time MI5 and police are conducting around 500 active investigations, involving 3,000 subjects of interest," Rowley said. "Additionally, there are around 20,000 individuals who are former subjects of interest, whose risk remains subject to review by MI5 and its partners."

Calls for May to resign ahead of elections

The latest attack comes against the backdrop of parliamentary elections slated for Thursday. Prime Minister Theresa May has come under fire from her chief political opponent for cuts she made to the police force during her time as home secretary.

Although Labour Party leader Jeremy Corbyn has voiced support for those calling on May to resign, he said the best remedy was to vote her out.

"There's an election on Thursday, that's the chance," he said, citing an "appalling" cut in police staffing levels. "We're calling for a restoration of police numbers, and there's a call being made for her to go, because of what she's done on the police numbers."

However, May shot back, saying Corbyn was not fit to safeguard Britain's security at a time of heightened threat.

London Mayor Khan, who is a member of the opposition Labour Party, said on Monday that the city of London "had to close police stations" due to cuts.

"It's just a fact that, over the last seven years, we as a city have lost 600 million pounds ($774 million or 688 million euros) from our budgets ... We've lost thousands of police staff." 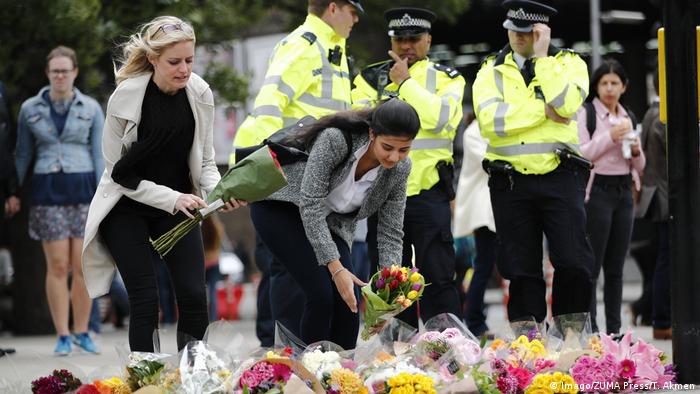 Police chief Rowley said Britain's security services had foiled 18 plots since 2013, including five in the past two months.

Khuram B. and Rachid R. were from the multi-ethnic Barking neighborhood of east London, where police raids began shortly after the attacks Saturday night.

All three suspects were shot dead in a hail of gunfire by police within minutes of the attack, which began when they drove a van into pedestrians on London Bridge.

The assault continued when the men, each armed with a knife, jumped out of the van and went on a stabbing spree in nearby bars and restaurants. Seven people were killed and dozens injured.

Editor's note: In a bid to limit their exposure, Deutsche Welle has decided to withhold terror suspects' names and obscure their faces.