Police have seized a large amount of forensic material after raids in London and Essex, with 12 people arrested so far. Officers are working to establish whether the attackers were operating as part of a network.

Metropolitan Police Commissioner Cressida Dick said on Monday morning that a high priority was to ascertain if the attackers were working alone.

"A very high priority for us obviously is to try to understand whether they were working with anyone else, whether anybody else was involved in the planning of this attack and to find out the background to it," Dick said.

"We've carried out searches in a variety of places in east London and we've seized a huge amount of forensic material, so we're working very quickly."

Read more: In Britain, tolerance and the 'acceptance' of extremism

Dick, who confirmed the identities of the attackers were known, said she would not yet release further details and would not say if authorities had been familiar with the men ahead of the attack.

The three attacks carried out by Islamist militants in Britain in the last three months have been largely domestic plots and the majority of the threat facing the country is not directed from overseas, Dick said. "All the recent attacks I think have a primarily domestic center of gravity," she said.

Twelve people were arrested in counterterrorism raids in the town of Barking east of London, with dawn raids conducted on Monday. Seven women aged between 19 and 60 years of age and five men aged 28 to 55 were arrested. One of the men was later released. Police said in a statement that "a number of addresses" continue to be searched.

Read more: British people 'will not want to carry on as before'

Three knife-wielding attackers in a van plowed into pedestrians on London Bridge on Saturday evening before going on a stabbing spree in nearby streets and bars in what authorities described as a new trend in militant Islamist terrorism. Police said they will release the names of the attackers as soon as operationally possible.

Seven people died and at least 48 others were injured, some of them critically, in the attacks on the bridge and in the nearby busy Borough Market area. One of the seven victims killed in Saturday night’s attack has been named as Christine Archibald, who was from Canada.

Police shot dead the three men, who were wearing what looked like explosive vests that later turned out to be fakes.

The so-called "Islamic State" (IS) group claimed responsibility for the London attacks late on Sunday, the group's affiliated Amaq news agency reported according to the SITE monitoring group. IS often makes such claims not only when it sends attackers, but also when others carry out plots inspired by the group's extremist ideology. 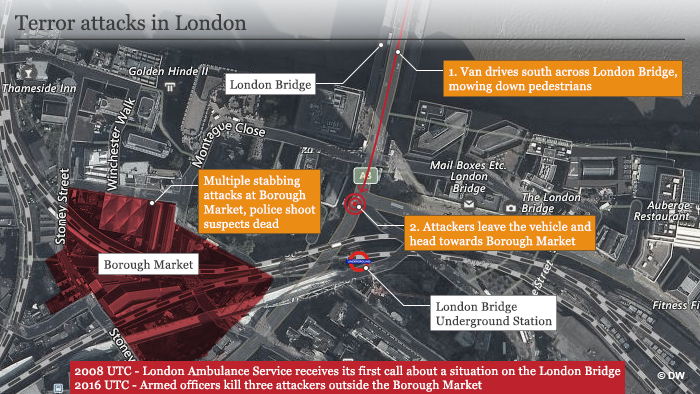 World leaders were quick to condemn the attacks.

German Chancellor Angela Merkel said in a statement that her thoughts were with victims and their families and that Germany "stood firmly and resolutely at Great Britain's side against every form of terrorism."

US President Donald Trump offered US assistance to Britain but also used the incident as an opportunity to call for his ban on travelers to the US from several Muslim countries - which he sees as a security measure - to go into force.

French President Emmanuel Macron said on Twitter that "France is standing more than ever side by side with the UK." France itself is still under a state of emergency after a string of Islamic extremist attacks.

London Mayor Sadiq Khan called on British citizens not to be cowed by the attacks and to vote on Thursday, as "one of the things these terrorists hate is voting; they hate democracy." He also announced that a vigil for the victims will be held on Monday evening near Tower Bridge.

There were still 36 people receiving hospital care on Sunday afternoon and 21 of them were in critical condition, according to officials. A London Transport Police officer armed only with a baton when he confronted the attackers was among those seriously injured with face, leg and head stab wounds.

Germany's Foreign Ministry and Interior Minister Thomas de Maiziere confirmed on Sunday that two Germans were hurt in the attack, including one person who was severely injured. A Canadian and a Frenchman were killed in the attack while a Spanish citizen, one Australian and four French people were also among the wounded.

Australia's Foreign Minister Julie Bishop said on Monday that three Australians were among those injured.

At the time of the attacks - around 10:00 p.m. local time (2100 UTC) - streets around London Bridge and Borough Market were crowded with people enjoying a Saturday night out in the district's fashionable bars and restaurants.

The attacks came days ahead of a June 8 national election, and less than two weeks after 22 people were killed in a suicide attack in the northern city of Manchester while attending a concert by US pop singer Ariana Grande.

Both the ruling Conservative Party and the Labour Party said on Sunday they would suspend their national campaigning for the upcoming election for a day.

Saturday's attacks bore similarities to one in March on Westminster Bridge in London, in which a man plowed into a crowd of pedestrians, killing five, and then stabbed a police officer to death in the grounds of parliament before being shot dead.

May: We need to live our lives as one truly United Kingdom

May: 'Too much tolerance of extremism'

Following a meeting of the government's COBRA emergency committee on Sunday, British Prime Minister Theresa May made a statement in which she called for increased unity in face of the terrorist threat.

"We cannot and must not pretend that things can continue as they are," May said, calling for more international control of the internet to take away terrorists' "safe spaces" to spread their ideology and gain recruits. She added that in the real world "there is - to be frank - far too much tolerance of extremism in our country."

May said Saturday's attacks were not connected to the Manchester and Westminster attacks in planning, but they were inspired by a "single, evil ideology of Islamist extremism" that perverted Islam as irreconcilable with Western values of tolerance and democracy.

She concluded her comments by saying: "United we will take on and defeat our enemies."

Attention has turned to England's second city in the aftermath of Wednesday's attack on Parliament. Samira Shackle reports. (23.03.2017)

Photos of the singer with some of her injured fans in a Manchester hospital have been shared on social media. In the ongoing investigation into the attack, police arrested a 24-year-old in Manchester. (03.06.2017)

Several people have died and dozens wounded after three attackers drove a van through pedestrians on London Bridge before stabbing at random in Borough Market. UK police are treating the assault as a "terrorist" attack. (04.06.2017)

Secret plans for the detailed course of events after the death of Queen Elizabeth II have been ready for a long time — codenamed Operation London Bridge.

Hundreds of thousands are expected to bid farewell to Queen Elizabeth II in London and Windsor. Here’s a photo series of the procession route.

The funeral of Queen Elizabeth II: An unprecedented police operation in London 19.09.2022

London is at standstill for the Queen's funeral as the biggest police operation in UK history unfolds. Sertan Sanderson reports from the British capital.