Opinion: EU must react to pressure from Turkey 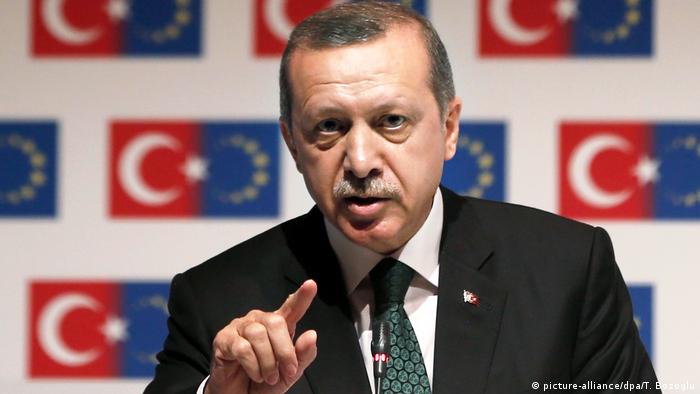 Turkish President Recep Tayyip Erdogan is most dangerous when his back is against the wall. In the face of an economic downturn and signs of the political demise of his Justice and Development Party (AKP), he has fallen back on his default position for governing: threaten and extort. In everyday life this is known as bullying, and the EU has consistently backed down each time he has used the tactic.

Things are not well in Ankara

At the moment, a number of contradictory reports are coming out of Turkey. The Supreme Court of Appeals recently ordered the release of journalists from the Turkish daily newspaper Cumhuriyet, who had been jailed for supposed political crimes. Yet thousands more intellectuals, writers, and teachers still languish in Erdogan’s prisons.

Fears of human rights abuses have put Turkey’s EU accession talks with the EU on ice. But now the Turkish president has signaled he wants to speak with leaders in Brussels.

Erdogan wants to negotiate because he needs help. He is under enormous economic pressure, and any sign that the EU is open to maintaining a partnership would help Turkish financial markets. Years-old calls for modernizing the Turkish-EU customs union, progress in the deadlocked accession talks, and the possibility of another injection of billions of euros from Brussels are all on the table.

Signs of political demise surround the president. Foremost among them are the losses his AKP suffered to the opposition in Istanbul in recent elections, as well as the foundation of new parties by his former allies: Ahmet Davutoglu, prime minister from 2014-16 and ex-leader of the AKP, and Ali Babacan, the former finance minister, who has focused his criticism on the dire human rights and economic situation in Turkey.

If such new movements cost the AKP just a few percentage points at the polls, it could signal the end of the Erdogan era. But the president won't go without a fight, and that is why he is now turning to the EU.

Erdogan is using the more than three-and-a-half-million Syrian war refugees in his country as a bargaining chip, and with a number of small, orchestrated measures, he's letting Brussels know just exactly what's at stake.

First, the number of new refugee arrivals in Greece has risen dramatically. Then, Syrians not registered in Turkey are being deported back to war zones.

Turkey has called on the US to help set up so-called safe zones in the northeastern Kurdish territories of Syria. These would take in the half-million or so refugees desperately seeking to escape the Idlib region, one of the last areas where fighting continues. But the plan is not working out for Erdogan. Neither Washington nor Moscow are willing to play along, and his grand scheme to play the two world powers against one another has largely failed.

That leaves the Europeans, who have the weaker hand in this geopolitical game and are less resolute and ruthless partners. Erdogan will stop at nothing to blackmail them with the fate of the Syrians. 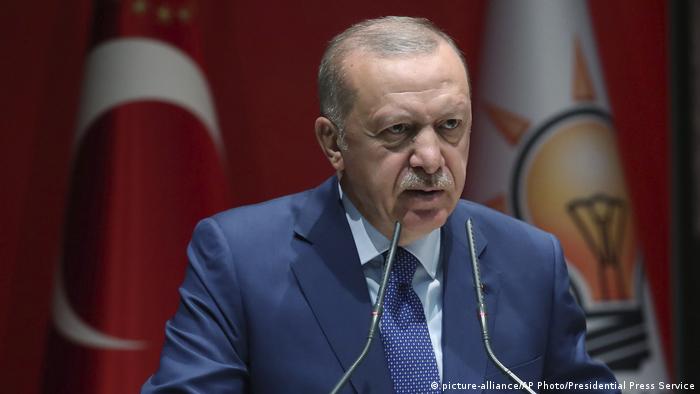 He knows full well that the EU fell into a deep political crisis in 2015 because populists used the large number of refugee arrivals to push nationalism and scare citizens. He also knows that the threat of Turkey again opening its borders, allowing Syrian refugees to travel onward to Europe, makes Brussels exceedingly nervous.

Most Europeans are blind to the militarily decisive and deadly battle taking place in Idlib right now: The phenomenon is known as compassion fatigue. Nevertheless, if the number of war refugees fleeing the region begins to rise, the EU should have a strategy in place to deal with it. If leaders don't want more refugees to come to Europe, they must create a safe alternative for them. 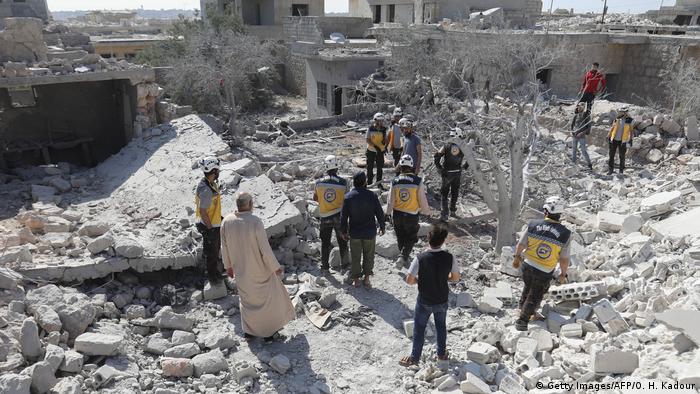 Idlib is the last remaining region of Syria where fighting between rebel groups and government continues. Above, people survey the damage from an airstrike.

Yet, Erdogan’s safe zone is not that alternative, because the thing he wants most is military control of the Kurdish territories. Furthermore, he is neither willing nor able to organize and care for the large numbers of Syrian refugees that may soon arrive in the area.

That is where the Europeans must step in: They finally have to decide how they want to react to the crisis. If they possess any remnant of humanitarian values, they must enter negotiations, decide what they are willing to contribute, and say just how much Turkish cooperation they are willing to accept.

This leaves Europeans with a foreign policy dilemma. On the one hand, they do not want to prop up Erdogan as his power begins to crumble. On the other, one cannot simply leave the fate of millions of Syrian to him or the US.

But Brussels is currently preoccupied with Brexit theatrics, the transfer of power within EU institutions, and a number of other everyday concerns. That all means there is little regard for the massive drama that is playing out on the Turkish-Syrian border.

The threat here is that Europeans will again wait and only react once it is too late — and thereby let themselves be blackmailed yet again by the Turkish president. That would be the worst possible solution for Syrian refugees, but also for European policy aims vis-a-vis Turkey.

The ruling AKP's loss in Istanbul's local elections was the worst political defeat Turkey's president has ever suffered, and it could be symbolic of a deeper crisis. Is this the beginning of the end of the Erdogan era? (27.06.2019)

Turkey cracks down on Syrian refugees

Turkey: Is Erdogan Losing His Grip?

AKP Spokesman: Istanbul loss not a vote against Erdogan

Opinion: Boycotting Black Friday is a waste of time 7h ago