A court in Ankara has ordered the conditional release of a top pro-Kurdish politician. However, Selahattin Demirtas will likely remain in jail after being convicted of spreading "terrorist propaganda." 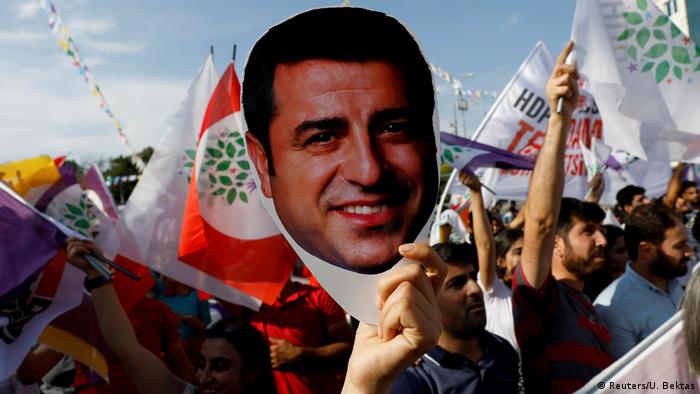 A court in Turkey ruled on Monday that top pro-Kurdish politician Selahattin Demirtas should be released from jail on terrorism-related charges. However, he will remain in prison, his lawyers said, because he is also serving a sentence for a separate crime.

Demirtas has been in pre-trial detention since November 2016, one of many opposition lawmakers, activists, academics and journalists who were arrested in the wake of a failed coup in July of that year.

The Ankara court "ruled unanimously" that the Kurdish Peoples' Party (HDP) co-chair "should be released immediately," since his defense had been completed. However, he will remain behind bars because he must also serve a four-year and eight month sentence for "terrorist propaganda."

Demirtas could face 142 years in prison if found guilty in the main trial, for which he had been in detention for nearly three years.

Seen as major rival to Erdogan

In July, the European Court of Human Rights (ECHR) ruled that Demirtas' conviction on spreading terrorist propaganda should be vacated. The ECHR found that Demirtas had been calling for a peaceful solution to Turkey's "Kurdish problem," saying that his statements "could not be regarded as amounting to incitement to engage in violence, armed resistance or rebellion."

Ankara has long accused the HDP of having ties to the outlawed Kurdish Workers' Party (PKK), which is listed as a terrorist group by Turkey and several of its major allies.

A charismatic politician sometimes called the Kurdish Obama, he was considered a major rival to President Recep Tayyip Erdogan. In last year's presidential election, he came in third while running from his prison cell.

At least one diplomat has been killed in Erbil, the capital of Iraq's autonomous Kurdish zone. An unknown gunman was reported to have fired at a group dining in a restaurant. (17.07.2019)