At least one diplomat has been killed in Erbil, the capital of Iraq's autonomous Kurdish zone. An unknown gunman was reported to have fired at a group dining in a restaurant. 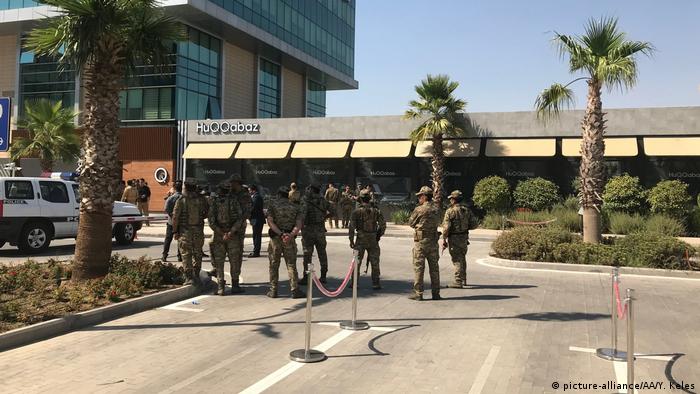 A gunman shot dead a Turkish diplomat in the Kurdish Iraqi city of Erbil on Wednesday, before fleeing the scene. A local citizen was also killed, according to the Kurdish security service.

Turkey's Foreign Ministry said one of its staff had been killed in the shooting at the popular HuQQabaz restaurant close to Ankara's diplomatic mission to the autonomous region. Local media reported that the individual was Turkey's vice-consul in the city.

"The attacker walked into the restaurant and headed to a table where the three were sitting. He drew out two pistols and started shooting intensely at them. Then, he — the shooter — escaped," the owner told journalists.

There was no immediate claim of responsibility for the shooting.

The Turkish Foreign Ministry confirmed in a statement an employee was killed in an "atrocious attack."

"We are continuing our efforts with the Iraqi authorities and local authorities to ensure that the perpetrators of the attack are found quickly," Turkish President Recep Tayyip Erdogan said on Twitter.

US Secretary of State Mike Pompeo condemned the killing. "There can be no justification for such acts of wanton violence," he said in a statement.

Witnesses in the city said roadblocks had been quickly thrown up around the Ainkawa neighborhood, which is home to the consulate and numerous restaurants.

Turkish jets regularly bomb positions belonging to the Kurdistan Workers' Party (PKK), which Ankara has outlawed, in northern Iraq. The Turkish Defense Ministry said on Saturday that its military offensive in the region, which started in May, had been expanded.

Kurdish protesters have set fire to tanks and equipment at a Turkish military base in northern Iraq. The incident, the first of its kind, left two protesters dead and reportedly forced Turkish troops to leave the base. (27.01.2019)