Kurdish protesters have set fire to tanks and equipment at a Turkish military base in northern Iraq. The incident, the first of its kind, left two protesters dead and reportedly forced Turkish troops to leave the base. 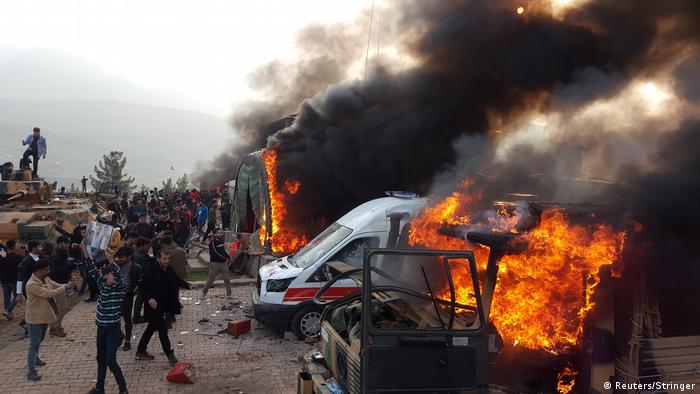 Angry protesters stormed a Turkish military base in Iraq's autonomous Kurdistan region on Saturday, damaging military vehicles and equipment in a confrontation that left two people dead and another 15 injured.

Hundreds of demonstrators had gathered outside a Turkish military base near the town of Shaladze in the northwestern Duhok region to protest Turkish bombardments last week that left at least four civilians dead.

The Turkish military regularly carries out air raids in northern Iraq on the Kurdistan Workers' Party (PKK), which is headquartered in the Qandil Mountains and has guerilla outposts and bases scattered throughout the Turkey-Iraq-Iran border region. Ankara has also conducted dozens of cross-border land operations targeting the PKK over the years.

NRT, a news channel in Iraqi Kurdistan, broadcast video of smoke rising from the Turkish base as hundreds of protesters tried to tear through razor wire and confront Turkish troops. In another video from NRT, Turkish jets can be seen conducting low flyovers and dropping flares on protesters.

NRT reported that six of its journalists covering the protests were arrested by Kurdish security forces and later released.

According to witnesses, Turkish troops initially fired on the protesters. A 13-year-old boy and a 60-year-old man were killed, Kurdish news network Rudaw reported.

At least two Turkish soldiers were reportedly taken hostage before being released to Iraqi Kurdish security forces. There were also unverified reports that Turkish troops had left the camp.

The Turkish Defense Ministry said in a statement that some "vehicles and equipment" were damaged in a "PKK terror organization provocation."

The left-wing PKK has waged an insurgency against the Turkish state since 1984 and is considered a terrorist organization by Turkey, the United States and the European Union.

The Kurdistan Regional Government issued a statement expressing its condolences to the families of the victims but said a "disruptive hand" was behind the protests, in an apparent reference to the PKK.

"The relevant authorities are conducting a thorough investigation and the perpetrators will face justice," it said. Security reinforcements were also sent to the region.

The Kurdistan Democratic Party (KDP) that dominates the Irbil and Duhok provinces is a rival of the PKK and has a close relationship with Turkey.

Since the 1990s, Turkey has established at least a dozen military bases and intelligence offices in the Iraqi Kurdistan region to support operations against the PKK. Saturday's incident is the first of its kind against the Turkish presence in Iraqi Kurdistan.

The US national security adviser has signaled a pause in planned troop withdrawals. The move abruptly announced by President Donald Trump last month was initially expected to be completed within weeks. (06.01.2019)

US and Turkish presidents discuss safe zone in northern Syria

The US and Turkish presidents moved from Twitter to the telephone to exchange their views over the US-allied Kurdish fighters in Syria. Washington is insisting the anti-"Islamic State" fighters should not be harmed. (15.01.2019)