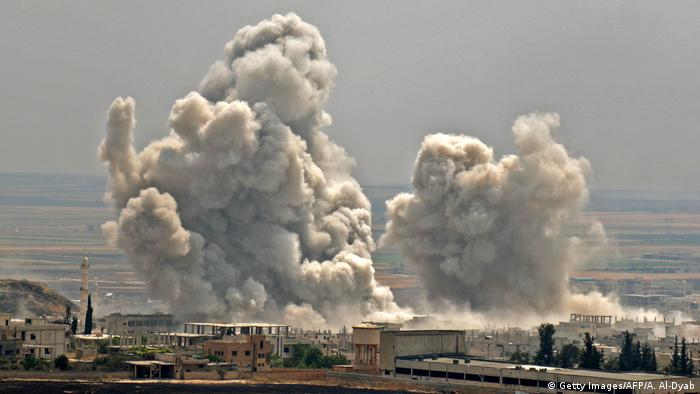 Turkish President Recep Tayyip Erdogan is meeting with his Russian counterpart, Vladimir Putin, on Tuesday to discuss a Syrian military offensive against the jihadi-dominated province of Idlib, where Moscow and Ankara had set up a demilitarized zone.

Syrian troops backed by Russian airpower have advanced in recent weeks against jihadi forces in the last major rebel enclave in northwestern Syria, and encircled a Turkish military post.

The fierce fighting has all but unraveled a fragile truce deal struck in September by Russia and Turkey as the Syrian regime pushes north to gain control of strategic highways connecting the government-controlled cities of Aleppo and Hama and the regime's Alawite heartland in Latakia on the Mediterranean coast.

Last week, a Turkish military convoy heading to an observation post in Idlib came under attack in an air raid conducted either by the Syrian government or Russian warplanes. The airstrike killed three civilians and wounded a dozen more. The Turkish Defense Ministry "strongly condemned" the August 19 attack and said it ran counter to "existing agreements as well as our cooperation and dialogue with Russia."

Turkey is a major backer of some rebel groups in Idlib, which is dominated by jihadi factions led by Hayat Tahrir al-Sham, al-Qaida's former Syria affiliate.

Hayat Tahrir al-Sham is not part of the September de-escalation agreement and has carried out attacks on forces allied to the Syrian government, as well as Russia's Hmeimim air base using drones and missiles.

The September truce deal between Russia and Turkey envisioned the creation of a demilitarized buffer zone between regime- and rebel-controlled areas and an as-yet-unfulfilled commitment by Turkey to isolate and combat jihadi groups. Turkey has 12 military observation posts ringing Idlib province.

The agreement was reached amid international concern that an offensive by the Syrian regime would send a flood of refugees and hardened extremist fighters to Turkey — which already hosts more than 3.5 million refugees — and potentially onward into Europe.

The Syrian government's Idlib offensive has targeted several health facilities funded by Germany, German officials say. The violence in Idlib has killed hundreds of people since late April, according to the UN. (23.08.2019)

Russian-backed Syrian regime forces have taken an important town in the rebel stronghold province of Idlib. The regime's three-month campaign has killed more than 2,000 people and displaced some 400,000. (11.08.2019)