Russian-backed Syrian regime forces have taken an important town in the rebel stronghold province of Idlib. The regime's three-month campaign has killed more than 2,000 people and displaced some 400,000. 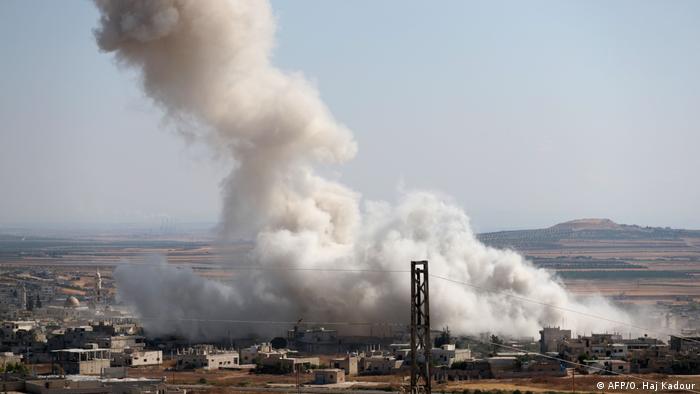 The capture of al-Hobeit is the most significant advancement the army has made in Idlib province since the start of its offensive three months ago, the Britain-based Syrian Observatory for Human Rights said.

It opens up an approach to southern regions of Idlib, which is home to some 3 million people, many of whom have been displaced by fighting in other parts of the country.

Al-Hobeit is also close to the town of Khan Sheikhoun, which has been held by rebels since 2012, and to parts of the highway linking the capital, Damascus, with Syria's largest city Aleppo in the north.

Syrian troops have been launching attacks on Idlib and a stretch of land around it since April 30.

The area has escaped the control of President Bashar al-Assad's government since 2015 and is a stronghold for al-Qaida-linked militants and other armed groups.

Russia is Damascus' main backer while Turkey has influence over some rebel and jihadist forces along its border.

Fighting on Saturday killed more than 100 fighters from both sides as the army and its allies unleashed about 2,000 air and artillery strikes against rebels dug into Syria's northwest, the Syrian Observatory for Human Rights said.

The three-month campaign of airstrikes and shelling has killed more than 2,000 people on both sides and displaced some 400,000.

The northwest offensive has drawn warnings from the United Nations and aid agencies of a new humanitarian crisis, as hundreds of thousands of people flee the violence and seek shelter at the border with Turkey.

More than 30 Syrian government fighters have died in a blast at a military airport in central Syria, according to a monitoring group. The airfield was the alleged origin of a chemical attack on a rebel-held town in 2017. (03.08.2019)