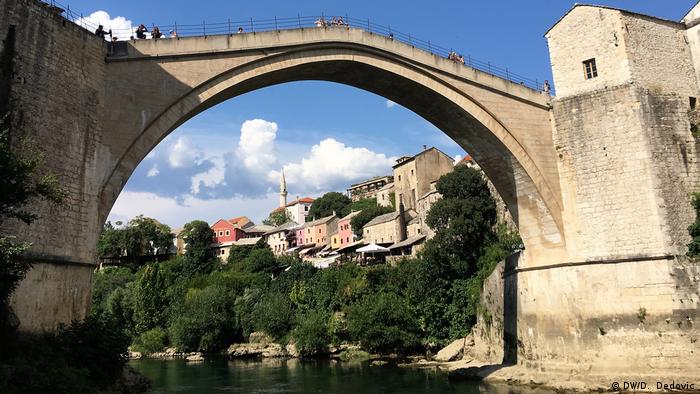 Among the issues discussed at the Bled Strategic Forum, which took place in Slovenia earlier this month, was the further integration of the Western Balkan states into the European Union. And while foreign ministers from the Balkan states were in attendance, there were noticeably fewer top diplomats from existing EU member states.

The guest who attracted the most attention was Matthew Palmer, the newly appointed US special envoy for the region. Once again, the US has seized the initiative and taken the first step in an effort to wake up an EU currently caught up in its own problems. Washington is hoping to bring the Western Balkan countries, currently at an impasse, back to the negotiating table and nudge them toward a genuine solution to their years-old disagreements.

In fact, it should be up to the EU to handle the problems of the region and actively promote the countries' further European integration. But back in the 1990s, when Bosnia and Herzegovina, and later Kosovo, were involved in terrible wars, it was US initiatives that put matters on the right track.

But past experience has shown us that only solutions worked out between the US and Europe have met with lasting success. To date, all the EU's undertakings have been lackadaisical and ineffective; we can only be grateful for the US initiatives, even if they've displeased some in Europe. US President Donald Trump is hoping to score a success before the presidential election in 2020, and has his sights set on the deadlock between Serbia and Kosovo, according to Daniel Serwer, an American expert on the region. Observers also believe the US doesn't want to abandon the region to Russian influence — which has already become very strong.

There is general agreement that Special Envoy Palmer's focus is on Serbia and Kosovo. The discussion about the dangerous land swap between the two countries, which would have had disastrous consequences for Bosnia-Herzegovina and other states in the region, has been off the table since the Western Balkans conference in Berlin at the end of April. I have long vigorously warned against such new border demarcations along ethnic lines, and I hope it's now clear that the international community agrees with the peace treaties on this firm position.

Palmer has not yet made a definite statement on this matter. Nevertheless, he has a message: the US does not want to see mono-ethnic states, but rather civil societies, in the Balkans — a goal consistent with the German and European stance.

Clarity needed from the EU

Shouldn't the EU also step up and appoint a special envoy to assist with the stalled talks between Belgrade and Pristina, an envoy who would also be responsible for the Western Balkans? That would be the logical step. Isn't it time to give the Serbian minority living in Kosovo a voice, and not simply wait until Belgrade leads the way?

Serbian President Aleksandar Vucic, recently met with US Senators Ron Johnson and Chris Murphy. Johnson, a Republican, is an expert on security issues at home and abroad — that's a good sign. The EU should move to cooperate with the US on this matter as soon as possible, to add a European perspective to the talks.

We must also ask whether Bosnia and Herzegovina, which experienced the terrible ethnic conflict in the 1990s, has not for years been held hostage in the Balkan conflicts. It should have been made clear long ago that the ambition of Milorad Dodik, the Bosnian Serb member of the country's presidency, to achieve independence for Republika Srpska would only serve to destroy Bosnia-Herzegovina. Since the EU obviously isn't in a position to come up with a clear stance on the issue, the US would also have to clear up any ambiguity on this matter.

Negotiations cannot simply be left to the former enemy states of Serbia and Bosnia-Herzegovina, and Bosnia-Herzegovina's unity is being undermined by the policies of Republika Srpska. There must be a clear and definite solution to this matter, to respect the Dayton Accords that were negotiated, for the most part, by the US. There's still hope that the US and the European Union have enough experience with history to recognize the importance of cooperation, allowing them to move in the same direction with Palmer's new initiative and the newly appointed European Commission.

Christian Schwarz-Schilling was the German minister for post and communications from 1982 to 1992. He gave up his post in protest against the government's inaction over the Bosnian War. In 2006/2007 he served as high representative of Bosnia and Herzegovina within the framework of the Dayton Agreement as well as the EU's special representative for Bosnia and Herzegovina.

Serbs and Kosovars want to take their borders back to the drawing board. Villages and valleys changing hands could help soothe an ancient feud but potentially break a longstanding taboo. (06.09.2018)

Opinion: Berlin Balkan conference — a surprising breakthrough in the cards?

Chancellor Angela Merkel and French President Emmanuel Macron want to mediate in the Western Balkans. Their efforts could be of benefit to the region and Europe, says guest policy expert Christian Schwarz-Schilling. (29.04.2019)

German Chancellor Angel Merkel assured Balkan states that negotiations to join the EU are in the bloc's interest, countering concerns by the French president, who insisted EU reforms must come before further enlargement. (05.07.2019)

US: Lab monkey missing in Pennsylvania after road crash 9h ago

Opinion: Why 2022 will be critical for Jews in Europe 50m ago