In offering to buy Greenland, US President Donald Trump is trying once again to disrupt the postwar Western order. What he is mainly interested in is geopolitical influence in the Arctic, writes DW's Oliver Sallet. 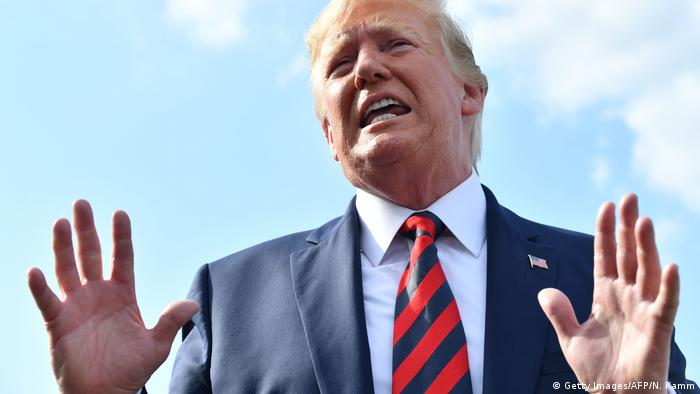 The president of the United States is a well-known skeptic when it comes to man-made climate change. Nevertheless, the current ice melt in Greenland may be warming his heart. That's because beyond Greenland lies the Arctic, one of the few undeveloped regions of the world with great economic potential.

In offering to buy Greenland, it's obvious that what interests the president is its natural resources. Climate change and the melting of ice masses mean that these will soon be easier to access. Even Trump, the climate change denier, knows this — and he makes no bones about the fact that the US wants to be at the forefront of the race for the Arctic in future.

A question of US geopolitical dominance

The world's Arctic countries include not only the US, Canada, Norway and Denmark, but also Trump's geopolitical rival, Russia. Even China, which doesn't actually have any Arctic territories, is unmistakably trying to justify its claim on the polar region, describing itself as a country "in close proximity" to the Arctic.

It's clear that this is about more than just a real estate deal. The race for natural resources and shipping routes reflects the changing geopolitical hierarchy of old and emergent hegemonies. Trump is interested in nothing less than American dominance in the Arctic — and for this he must compete with Russia and China.

In fact, the idea of making Greenland a US territory is by no means new. President Harry S. Truman tried it in 1946. From Louisiana to Alaska, the US has made huge and historic land purchases before. Why shouldn't "Make America Great Again" apply to Greenland, too, eventually?

Trump is challenging the postwar order

Seven decades have passed since 1946 — and not only that. In the immediate aftermath of World War Two, the postwar world order, especially under US leadership, was still taking shape. Today, the West, including Denmark, is strongly linked with the US through their common membership in NATO. The military alliance was a guarantee of freedom and multilateralism.

Now, though, China is contesting America's position as a global power — and Trump is partly responsible for this. Ever since taking office, he has sought to weaken the foundations of the Western structure: pushing for the break-up of the European Union, questioning the point of NATO, cozying up to despots and shunning America's old partners in the West. Offering to buy the Danish territory may be a breach of taboo — but it corresponds to the worldview of this US president.

Opinion: Nuclear energy too costly for humans — and the planet 17h ago