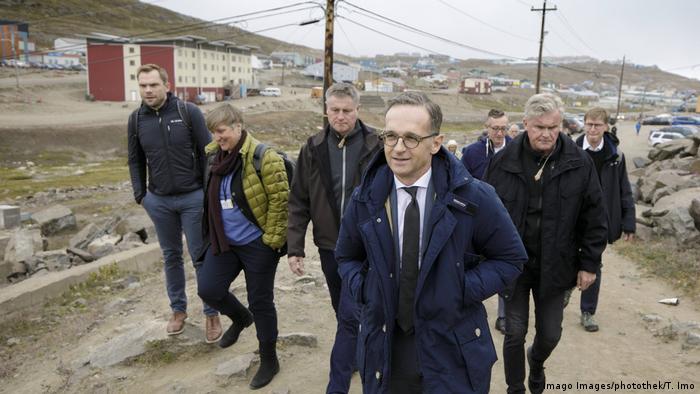 German Foreign Minister Heiko Maas on Thursday toured Canada's far north, a vast but fragile region coveted by the United States as a potential defrosted "Northwest" shipping passage between the Atlantic and Pacific. Little publicized is that since 2016, a German-Canadian research team coordinated by Germany's Fraunhofer Institute has been testing a "passive radar" method intended to help ships navigate the shoals and narrows of the Northwest Passage.

Last May, US Secretary of State Mike Pompeo stumped an Arctic Council summit in Finland by welcoming "steady reductions in sea ice" that he said would open "new opportunities for trade" via the Arctic by shortening voyages.

His demurral led to the failure of the eight-nation council, which includes Canada, Russia and Norway, to issue a final statement on climate change as a serious threat — likely to have included a warning that the Arctic's Barents Sea was nearing a "tipping point" as waters turn warmer.

Germany is among 13 nations with only observer status at such biannual meetings of the eight immediate neighbors of the Arctic, where temperatures are rising two or three times faster than the world average.

Maas, first making a stopover at Iqaluit (pictured above), the main town on Canada's Baffin Island, told reporters that its 7,000 inhabitants — half Inuit — themselves had "no chance" to stop the melting of the ice in their local Frobisher Bay.

"That is our responsibility — and to witness that here and focus on it — is extraordinarily  important," said the German minister.

Warming in the bay had become all too evident, said host Iqaluit hotel manager Stephen Sullivan.

On Thursday Maas was due to fly 1,000 kilometers (600 miles) across the vast island to the settlement of Pond Inlet to witness more of the ecological impact on Canada's Nunavut territory.

Visiting the Nunavut Research Institute (NRI) at Iqaluit Wednesday, Maas was told by lead scientist Mary Ellen Thomas that the disappearance of sea ice in the bay had deprived families of traditional transport routes and hunting grounds for fish and seals.

German ethnologist Torsten Diesel, at NRI for the past six years, said the sea ice cover had become increasingly "dangerous" because of strong currents and tides.

"One can drive over the ice in the morning, but by the afternoon an open water gap has emerged. Every year we lose hunters who venture onto the ice," Diesel told German public Deutschlandfunk (DLF) radio.

The location's ice loss showed that climate change was "no theoretical discussion" and made clear what would happen "if we don't change our behavior," Maas said, referring to fossil fuel reductions promised by nations at the 2015 UN summit in Paris.

"They come back [thinking] differently compared to when they set out."

German ship to drift near pole

From next month, Rex will head a major winter expedition. The Polarstern (Polar Star), a German research ship, will drift across the Central Arctic by tying itself to a large ice flow for months through the winter dark.

"We'll be north of the 80th parallel the entire time, and for much of it, we'll even be in the direct vicinity of the North Pole," Rex said.

Aside from Norway's 19th century explorer Fridtjof Nansen, few had conducted an ice-drift winter analysis so far north in the "epicenter of global warming," he added.

Norwegian researchers warned the Arctic Council in May that the North's chilled stratified waters — vital for unique fish life — were already "shifting" to resemble mixed Atlantic waters because of temperature rises.