Brexit is on the negotiating table yet again in Brussels. With no alternative in sight, the UK is limping toward the day it will ultimately leave the European Union, says DW's Bernd Riegert. 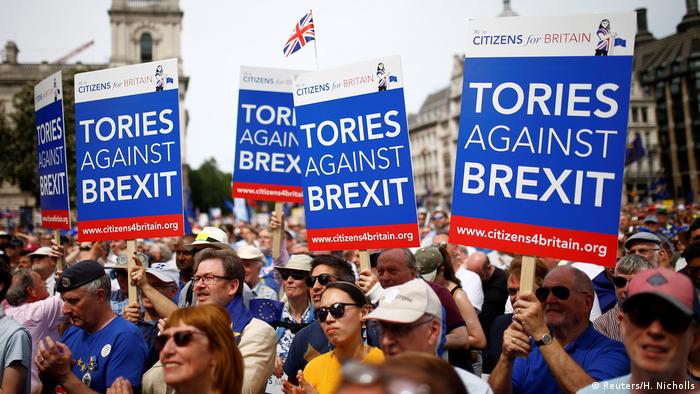 The UK's Brexit negotiations with the European Union are at an impasse — that's according to Prime Minister Theresa May. In a letter to her own divided Conservative party, she admits that, surrounded by red lines she is not allowed to cross, she can neither push ahead nor turn back. Brexit can't be too soft or too hard, or else the various parties and the EU will be unable to reach an agreement.

Brussels has rejected May's latest proposal, which would have meant negotiating a kind of free trade area only for goods. Just 11 percent of UK citizens liked that plan, according to opinion polls. Negotiations resume in Brussels this week. However, the teams accompanying EU chief negotiator Michel Barnier and the UK's Brexit minister, Dominic Raab, wonder what they will be negotiating.

There are no viable proposals either on trade issues or the border between Northern Ireland and Ireland. The British government is set on a vague statement about its future relationship with the EU. However, Brussels is insisting on a concrete exit treaty that would at least finalize essential questions regarding finances, borders and civil rights. It is clear that time is getting short. A Brexit deal is supposed to be in place by the end of October. That is tight.

Up until now, the British have negotiated by playing dead and only coming up with something substantial and concrete at the very last moment, but that is not likely to work this time around. May's attempt to split the EU with charm offensives in Paris and Berlin has failed. The UK's negotiating position is growing weaker by the day. The EU has much less to lose than the British. On the homefront, May has been stirring up panic, stockpiling food and medicine in the case of a "no deal" Brexit and pushing the idea that the EU is to blame for everything because of its inflexibility.

The basic problem is that Brexit, which was pushed by a dishonest referendum campaign, has practically no advantages for the UK, neither concerning trade nor migration. To the contrary, British employers are already complaining that too few EU foreigners want to work in the country. Brexit is scaring them off.

The Remain camp is desperately fighting for a second referendum to stop Brexit. That will not happen, at least not under May, who has categorically ruled it out. Whether the prime minister can survive party infighting and hold her own beyond the autumn, when a Brexit deal is supposed to have been reached, is doubtful. On the other hand, no one really wants her nearly impossible job.

Boris Johnson, that Brexit pioneer and political clown, has vanished. Opposition leader Jeremy Corbyn has not seized the moment, and his Labour party leadership tenure has been under assault for supporting the plight of the Palestinians. In any case, Corbyn has not yet presented his own Brexit concept.

What now? Without a concept, Britain continues to teeter toward Brexit day.  At the moment, there is little hope that anyone will pull the emergency brake and at least postpone the unfortunate event.