The migrants on the southern US border need help. But so do the countries in Central America that they come from — to dismantle drug cartels and corruption. That is the main challenge, says DW's Carolina Chimoy. 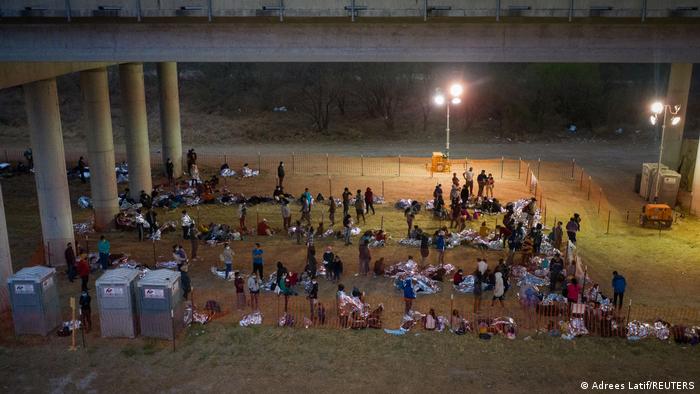 People who have fled very real dangers now live in catastrophic conditions directly on the border, on the Mexican side. The migrants sleep on concrete close to the bridges that lead to the US. Their only hope is that they can manage to cross over — as quickly as possible. But for many unaccompanied minors, hope isn't enough and they attempt to illegally cross the Rio Grande river that makes up the border here. 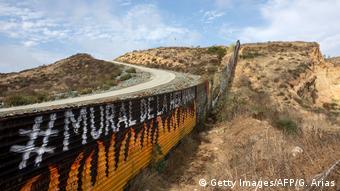 Trump's border wall plan helped get him in elected

In 2016, Donald Trump was elected president not least because he promised a wall as a solution to the migration problem. Now, under Joe Biden, many in Central and South America are hoping to be let in. But the reality on the border looks quite different.

"Don't come over! We're in the process of getting set up. So, don't leave your town or city or community. We're going to make sure we have facilities in those cities and towns... to say you can apply for asylum from where you are right now. But don't come now or we will have to send you back!” Those were President Biden's words in an exclusive interview with the television network, ABC, on Tuesday on the migrant crisis.

The previous week, the White House's southern border coordinator, Roberta Jacobson, repeated the same message during a press conference, even saying it in Spanish — ‘Don't come! It's not the right time!”

The White House might not have admitted it so far, but the new US government has a problem. The number of migrants on the border has tripled in the last two weeks. Aid organizations put the figure at over 180,000, with most people coming from Honduras, Guatemala and El Salvador. Many say that they had heard that the new president would now open the borders for them. Nobody here was prepared.

Memories of Germany in 2015

The images are a reminder of the arrival of hundreds of thousands of refugees who came to Germany in 2015 after Chancellor Angela Merkel expressly opened the borders. Migrants, especially from Syria, Iran and Afghanistan, came from Turkey over the sea to Greece and then via the Balkans, fleeing wars and violence at home. Here too a river — the Inn on the German-Austrian border — was the last hurdle for the migrants to overcome before reaching safety in a country ready to take them in.

Like Chancellor Merkel, President Biden too now faces a dilemma: on the one hand he wants to change the racist migration policies of Donald Trump and shape them in a more humane way. But this message has spread to Central America and led to a dramatic escalation of the situation on the US-Mexican border.

The Republicans are seizing the opportunity to use these images to whip up fears among the population and to speak of an "unstoppable crisis.” House Minority Leader, Kevin McCarthy, who still supports from former president Trump, even paid a visit to the border along with other lawmakers to, in his words, "defend our border.” Where the populist demagogy of the conservative Republicans is headed is all too foreseeable. 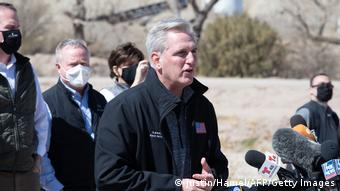 Biden's government is now working on two tracks: personnel on the border are being temporarily beefed up. Workers from the Federal Emergency Management Agency (FEMA) are meant to help with the faster processing of asylum applications and build tents and barracks for unaccompanied minors who can't be sent back. Above all, Biden has spoken of a longterm treatment of the problem at its very roots. By that he means an intensified development cooperation with the countries that the migrants come from in order to tackle the reasons they leave in the first place. Chancellor Angela Merkel had followed a similar approach with African nations.

Drugs-related crime at the heart of the problem

Death threats, blackmail, kidnappings, political persecution — these are the reasons most migrants cite for leaving. Those are valid reasons though there is no war in their home countries. What's clear is that rising crime and homicides and above all, the growing power of the drug cartels in many countries in Latin America are at the heart of the problem. Why else would people embark on a life-threatening journey and leave absolutely everything behind?

Industrialized countries also share responsibility for this development. The drug trade is so profitable because there is such a high demand in the rich West. Tackling the root causes is the right approach. But it shouldn't just be empty words, what's needed is massive economic and reform aid for Central America. And, it will take time to dismantle the corrupt systems and the illegal power structures that, in isolated cases, lead all the way to the president's office. In the words of a migrant from Honduras on the southern US border: "I didn't want to leave. My country is beautiful. Unfortunately, it's in the wrong hands."

Children traveling alone, some as young as six years old, have been a part of the rising numbers noted by the Department of Homeland Security. Republicans have accused President Biden of being too soft on immigration.